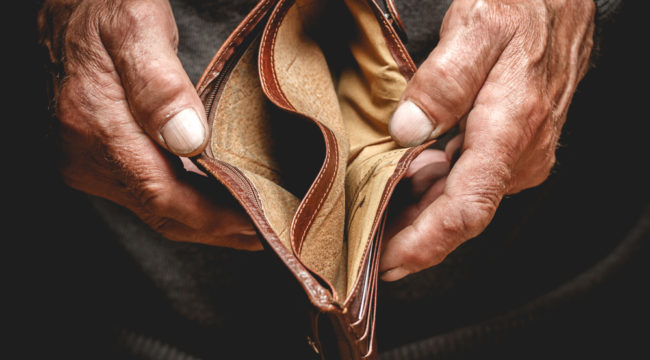 I’ve got some good news and some bad news:

The good news is that you can likely expect to live a much longer life than scientists thought possible just a few years ago. The bad news is that you’re going to need a bigger nest egg to pay for retirement.

According to a recently published book called The 100-Year Life, odds are rising that you will live to be triple digits. And for younger people, there’s now more than a 50% chance that they will live past 100 years.

With so many productive and healthy years ahead of you, it’s important to make sure that you’re collecting the maximum amount of income to cover life expenses.

That’s especially difficult for most investors today, because of extremely low (often negative) interest rates. You can’t get much from your nest egg if you’re relying on traditional investments like Treasury bonds and bank CDs.

And many retirees are in for a rude wake-up in the next few years.

That’s because U.S. corporate pensions are woefully underfunded and may have to cut payments to seniors in order to stay solvent.

Forget Social Security (which we all know is a broken system living on borrowed time). Now many corporate pensions are in the same boat and may soon start reneging on the promises made to workers.

To put these stats in plain English, corporate pension funds don’t have enough money to pay retirees. They are losing money on their investments. And instead of committing more capital to these pensions to shore up the difference, corporations are actually paying less money into these pension funds.

Workers have spent their lives helping to build these corporations. They’ve been promised a retirement package in return. But corporations are turning a blind eye to these retirees and spending less money to ensure their workers get paid.

Unfortunately, the story gets even worse…

As I did more research on the problems with U.S. corporate pensions, I quickly realized the situation is even worse than I thought! Even if your pension has the money, it may be hard to collect.

Not only are U.S. corporations underfunding their pension plans, but they’re also underpaying their retirees! According to a recent Bloomberg article, retirees are missing out on an estimated $8 billion in annual pension payments.

The bottom line is that pensions are becoming less and less likely to pay their retirees, and that’s a big problem if you’re counting on these payments to fund your retirement.

Many of today’s pension problems can be traced to the Fed’s ultra-low interest rate policies. As the Fed’s war on savers continues, more collateral damage is piling up. Pension funds in the U.S. are getting sucked into this war, and they’re being manipulated by the Fed.

The Wall Street Journal recently published an exposé piece on what it takes to manage a pension fund in today’s zero interest rate environment.

Pension funds take money set aside for retirement and invest that money into safe securities. The goal is to grow that money so there is enough capital to pay retirees down the road. These pensions must protect their capital, because losing money for their retirees would be disastrous. But they also must grow their investments. Otherwise, there won’t be enough money to pay employees when they retire.

In the past, these funds could buy safe investments like Treasury bonds or highly rated corporate bonds. The yields on these safe securities would help the pension funds grow their accounts just enough to be able to pay retirees.

But all of that has changed now that the Fed has lowered interest rates and kept them near zero for the better part of a decade.

Continue to invest in “safe” bonds. This choice guarantees that pension funds will not generate enough money to pay retirees. So this option is not a good one.

Buy “riskier” investments. This choice may give pension funds higher returns, which will allow them to pay retirees. But this choice is also not a good one, because riskier investments could backfire, causing pension funds to lose money!

By the way, this isn’t an accident. This is an actual, purposeful war by the Fed. The Fed doesn’t want you to save, and it doesn’t want these pension funds to invest in safe bonds.

That’s what David Villa, a pension fund manager for the $100 billion State of Wisconsin Investment Board, had to say about the Fed’s manipulative policy. Unfortunately, just knowing that the Fed is distorting markets isn’t enough. Villa’s pension fund still has to choose whether to “play ball” with the Fed and hope that the additional risk doesn’t bite them or to “stay the course” and lock in low levels of return.

If you’re depending on a pension fund to pay out when you retire, you may very well be out of luck. But even if you’re not counting on a pension, this manipulation still affects you. Here are two quick examples of how everyday people — even those without a pension — are being hurt by the Fed’s zero interest rate policy.

Individual states and the federal government are extremely unlikely to materially cut benefits to their retirees. So if the pension funds don’t make enough of a return or, God forbid, they take on massive losses from risky bets, you can expect your taxes to be higher to make up the difference.

As you can see, this war on savers is not just fought on Wall Street or in Washington. It’s affecting you in ways that can cause serious financial pain, even if you don’t have a pension.

That’s why you must have a “Plan B” to successfully retire. Whether you’re saving for retirement in the future or you’ve already crossed the retirement threshold, you need to take control.

It no longer makes sense to rely on corporate pensions, Social Security or any other “promised” retirement plan.

Thankfully, there are still some great options available to you. These options can mean the difference between enjoying your retirement years doing the things you enjoy with the ones you love and scrambling to make ends meet week in and week out.