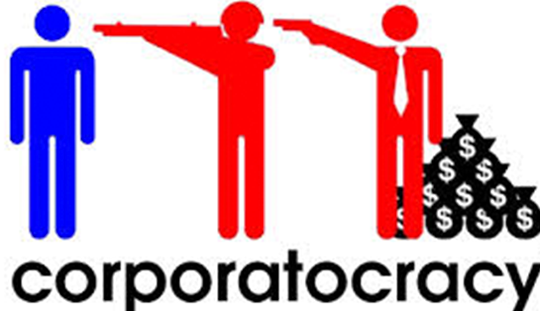 Ultimately, the dominance of global capital (the Corporatocracy) is not financial — it’s political.

One little-remarked consequence of the central banks’ policies of near-zero interest rates and quantitative easing is the unrivaled dominance of mobile global capital, i.e. the Corporatocracy.

The source of corporate political power is the ability to borrow essentially unlimited sums for next to nothing: what I have long termed free money for financiers.

Consider the typical family farm, not just in America but in Germany, Australia, etc. It’s hard work squeezing a livelihood from the land in a market dominated by a handful of global corporate giants and their state handmaidens, and so unsurprisingly many in the next generation have opted for corporate-state jobs in urban areas rather than shoulder the financial risks of continuing the family farm.

A neighboring farmer might be interested in buying, be he/she will have to borrow the money at (say) 4%.

The net result is the nation’s farmland, its core productive asset, slides inevitably into corporate ownership. Anyone who resists selling out is crushed by low prices (corporate farms can over-produce and survive low prices, family farms cannot). Or they are crushed by the disadvantages of being an “outsider” selling to the corporate supply chain, which favors in-house suppliers or large corporate producers.

The same dynamic — the unparalleled power of cheap credit — leads to corporate ownership which then funds corporate dominance of the political process. Consider building a house for your family. You’ll need construction financing, and since that’s riskier than a conventional mortgage to buy an existing home, that will cost you between 4% and 5%, and requires thousands of dollars in fees.

The corporate homebuilder can borrow at 1%. Guess who’s construction costs are cheaper?

As corporations buy up productive assets, they consolidate these assets into cartels and quasi-monopolies that can be protected from competition by lobbying and campaign contributions. Once you can buy up productive assets with cheap borrowed money, the profits start piling up, and you can use a thin sliver of these profits to hire lobbyists and buy political favors/protection from politicos desperate to cling onto their power.

If interest rates were 10% for everyone and every entity, individuals and small enterprises that had saved up cash could outbid corporations, which habitually get crushed in downturns by high interest payments. At zero interest rates, corporations can outbid savers, households and small businesses, who don’t get to borrow billions of dollars at near-zero rates from central banks.

Ultimately, the dominance of global capital (the Corporatocracy) is not financial — it’s political. The populace and their elected leadership either allow corporations to dominate (via central bank policies) or they strip the central banks of the power to create a dominant Corporatocracy.

The choice is ours — or it used to be.

No matter how you interpret Brexit — a Kabuki play by Deep State insiders, a political ploy that went off the rails, an ugly outburst of xenophobia, a rebellion of the Forgotten Class that lost out in the Great Financialization boom, a resurgence of nationalism — whatever interpretation or combination of factors you favor, the net result is the same: Brexit reflects a precarious state of shifting political tectonics that threatens the status quo.

Brexit is a symptom of the Crisis of Modern Capitalism. The current global version of Capitalism is characterized by these overlapping dynamics:

The global “recovery” narrative is crumbling like weathered sandstone on the edge of a cliff. No wonder institutional money managers, hedge funds and punters are all either fleeing to safe havens or entering trades with their thumbs twitching nervously on the “sell” button.

If the global banking sector isn’t precarious, then why are bank stocks tanking? If these banks are minting profits and accumulating well-collateralized capital, why are investors selling them?

If everything’s so solid, why is hot money chasing the bubble du jour? From copper to rebar to bitcoin to iron ore to silver, hot money is sloshing from one casino-sector to another on a daily or weekly basis — what’s next? Bat guano? Disney collectibles? Is this a sign of a healthy, sustainable market?

If you think so, I have a container load of hot bat guano to sell you. I guarantee it will be the next bubble du jour, you’ll get rich overnight…

If the U.S. economy isn’t precarious, why has the growth rate of new businesses collapsed to Depression-type lows? If everything is going great, why aren’t entrepreneurs jumping in to mint all those easy profits?

The global political/economic state feels precarious for a good reason: it is precarious. Being told everything’s rock-solid while the ground beneath us is rumbling isn’t terribly persuasive, and some talking head reassuring us that the economy is still “growing” won’t stop the tremors.