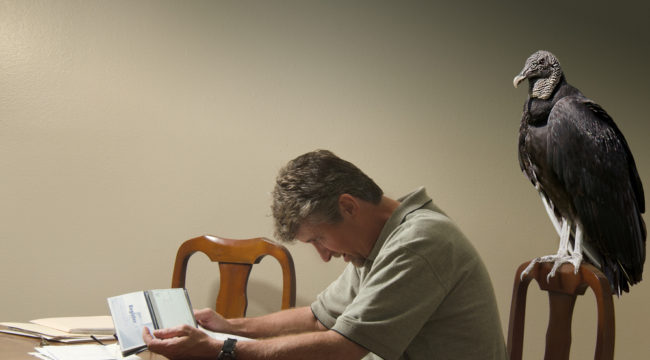 As to the entitlements matter, the Congressional Budget Office (CBO) baseline projects outlays of $24 trillion over the next decade for social security, Medicare and SSI (supplemental security income — mainly for the poor elderly).

These expenditures are overwhelmingly driven by the baby boom retirement wave that’s coming, and actually constitute 50% of the $48 trillion baseline for total Federal spending during the 10-year period.

Yet as I have previously explained, the House budget resolution does not include a mandatory reconciliation instruction to the standing committees to cut a single dime from these giant entitlements.

So like some kind of budgetary doomsday machine, nothing will happen to change the law, and the demographically driven spending levels will rise automatically and indefinitely.

Worse still, if you add in veterans benefits and Medicaid — both of which are being driven rapidly higher by the aging-out of the eligible populations — the total cost is nearly $31 trillion over the coming decade or 65% of total Federal spending.

So it might be wondered how the GOP can punt on these giant entitlements, slash business taxes and also deliver a “huuge” middle class tax cut — all without blowing sky high a fiscal equation that is already heading for $10.1 trillion of new deficits and outstanding public debt of $31 trillion by 2027.

Needless to say, they can’t — nor can they remotely deliver upon the Donald’s fatuous but endlessly repeated claim that this will be the biggest tax cut of all time. To the contrary, based on the funny facts below, I think the bill introduced late last week is the biggest con job in years.

The House GOP will struggle to avoid a complete implosion during the mark-up and floor consideration scheduled for the next three weeks.

In the first place, it does not cut anything that could remotely be called middle class taxes by a net dime over the next ten years; it actually increases them.

That’s right. The official cost-out provided last night by the Joint Committee on Taxation shows that the bill will reduce total individual taxes (excluding corporate) $929 billion over the next decade.

But that number sounds big only because we are in Federal budget land. In fact, the individual income tax baseline for this period is $22 trillion — so the entire “cut” amounts to just 4.2% of the total.

But the real skunk in the woodpile is the fact that more than 100% of this cut in individual income taxes is accounted for by three items, which will accrue overwhelmingly to the very wealthy.

The bill repeals the alternative minimum tax at a cost of just under $700 billion over the decade, phases out the estate tax at a cost of $172 billion and provides for the so-called business pass-thru rate of 25% at a cost of nearly $450 billion.

Stated differently, set aside these three items and the baseline individual income tax revenue over the next decade would be $20.9 trillion — meaning that the GOP’s ballyhooed tax bill will raise taxes$386 billion, or 2% on everyone else.

Yes, the GOP will talk ceaselessly about the super-successful entrepreneur who invented a particularly tasty brand of Christmas cookies in her home kitchen. She would now save $150,000 on her $1 million annual income owing to the 25% pass-thru tax (versus the regular fourth bracket rate of 39.6%). But there should be no illusions about who will get the big bucks.

The overwhelming bulk of the $448 billion “tax cut” for this nugget will go to the 400,000 filers (0.3% of filers) with adjusted gross incomes (AGIs) over $1 million. These taxpayers have plenty of lawyers and accountants, and also plenty of incentive to arrange their affairs to qualify for the pass-thru rate at 14.6 points worth of lower taxes.

Needless to say, the Ways and Means Committee members are going to get manhandled good and hard as they move past the army of lobbyists each day on their way to the committee room mark-up session.

Already, the real estate agents, homebuilders, charities lobby, small business and dozens of others are up in arms about the $1.5 trillion of deductions and loopholes that are on Chairman Brady’s chopping block.

So here’s the thing. Much of the benefit of the rate reductions built into the four new brackets will go to the very wealthy. That is, the 39.6% bracket starts at $471,000 under current law, but that would be raised to $1.0 million under the GOP plan.

At the end of the day, however, the whole contraption isn’t going to fly.

That because the three big breaks for the wealthy mentioned above plus net corporate tax reductions for the 20% rate, 100% expensing of new equipment and other items will cost $2.2 trillion over the next decade.

Yet the net cost of the GOP draft according to the joint tax committee is $1.49 trillion or the exact allowance in the FY 2018 budget resolution for a deficit-financed tax cut ($1.5 trillion).

And those are truly funny facts. The tax cut for the very wealthy and corporations in the GOP draft amounts to 147% of the net cut.

Everybody else is getting a $700 billion increase!

I have been saying for a long time that the GOP is barking up the wrong tree. The individual income tax has become a rich man’s levy with the top 4% of filers (6 million) paying 60% of the taxes, while the bottom 122 million pay just 13%.

Consequently, there is no way to square the circle — you can’t have a middle class tax cut when the middle class (households with incomes under say $125,000) pay less than 5% of their AGI in Federal income taxes.

The proper tax to cut is the payroll tax. Speaker Ryan’s median income family ($59,000) currently has $9,500 extracted to pay the employer and employee share — or 8X more than the $1,182 tax cut he was ballyhooing last week

So the overwhelming share of the $1.46 trillion tax reduction owing to the 20% corporate rate will go into dividends and share buybacks — which is to say the top 1% and 10% of households which own most of the financial assets.

The net of it, of course, is that future generations are being bushwhacked with $1.5 trillion of additional public debt in order to indulge a tiny fraction of taxpayers with several trillions of tax cuts and shareholder returns that they don’t really need.

That is, not in an era of Bubble Finance and massive inflation of financial asset prices in which household net worth has risen from $56 trillion in March 2009 to $96 trillion at present — and most of that gain has gone to the top of the economic ladder.

At the end of the day, those facts are not really all that funny because they imply that the GOP is blowing big time its opportunity to reconnect with Flyover America, which will essentially be ignored by the GOP tax bill.