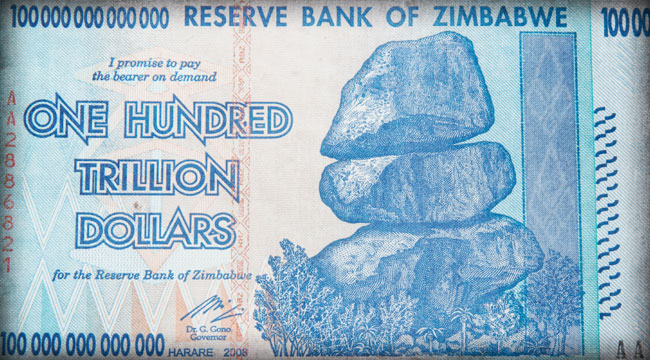 Gono, but Not Forgotten

Central bankers, as everyone now knows, are rascals and scalawags. Gideon Gono is no exception.

Gono, if you haven’t heard of him, is Robert Mugabe’s right-hand man. And Robert Mugabe is the No. 1 man in Zimbabwe, an African country with a real “riches to rags” story. It was one of the wealthiest and safest countries in Africa when it was run by Ian Smith in the ’70s. But the meddlers and world-improvers couldn’t leave well enough alone. They helped put Mugabe in power. Since then, the place has gone to hell.

Gideon Gono, 53 years old, lives in a 112-room mansion in Harare. He says he doesn’t drink, sleeps only four hours a night and runs regularly. He is known as “Mr. Inflation” for his Olympian efforts to increase the country’s money supply. He did this the old-fashioned way — by printing pieces of paper will lots of zeros on them.

But there is something heroically imbecilic about the man. While most economists hedge and weasel, Mr. Gono went boldly, recklessly forward — where no central banker had dared to go, at least not since the worst days of the Weimar Republic. Mr. Gono stood tall… a colossus of error… an Olympus of bunglement.

It is easy to criticize the chief of Zimbabwe’s national bank. In fact, it is hard not to criticize him. Keynes warned that “there is a lot of ruin” in a nation. Mr. Gono’s contribution to economics is to show how much ruin there is. That… and proving that the laws of supply and demand still apply to money.

Between August 2007 and June 2008, the Zimbabwean money supply increased 20 million times. Naturally, this led to the kind of spectacular increases in consumer prices that modern economists had seen only on newsreels. Consumer price inflation was clocked at 2,000,000%. Six months later, it sped up to 230,000,000%.

Of course, Mr. Gono rolled out all the usual inflation-fighting measures — all, that is, except for the one that works. Mr. Gono personally went around, found shop owners who had illegally raised prices and had them arrested. Bank withdrawals were limited to 500,000 Zimbabwe dollars per day. If you wanted to buy 2 kg of sugar, for example, you had to stand in line for four days at an automated teller. But at those rates, you could stand in line at the automatic tellers every day for eternity and never get enough money to buy a drink of water.

We salute Mr. Gono. He may be a moron, but at least he’s a useful one. Better than another bad theory, he has provided a bad example. In an age when central bankers all over the world are trying to avoid a decline in the cost of living, Mr. Gono has proven that there are worse things.

But despite Gono himself, Gonoism seems to be gaining admirers in the rest of the world, because the alternatives don’t seem to work. Keynesianism, for example. The Keynesians say that when people stop squandering their money, the feds have to step in and squander it for them. Right now practically every government in the world is promising huge new spending programs. Deficits be damned!

Milton Friedman saw the problem with Keynesianism — it led to rising prices… and then stagflation. He pointed to the lever marked “monetary policy.” Give that a pull, he said. Just make sure the economy has enough money; everything else will take care of itself. Maggie Thatcher and Ronald Reagan both pulled on the monetary policy lever. And in the recession of 2001-02, Alan Greenspan yanked it so hard the handle practically broke off. Milton Friedman was still alive at the time and actually approved of Greenspan’s handiwork, saying that he had spared the economy a worse recession, or words to that effect.

But now we face an even worse recession. And central bankers are running out of ammunition to fight it. The U.S. Fed’s key rate is effectively zero. His resources are “obviously limited,” said Bernanke, in a speech in Austin, Texas. But then, while the Fed can’t push interest rates below zero, “the second arrow in the Federal Reserve’s quiver — the provision of liquidity — remains effective,” he said. One option is for the Fed to buy “longer-term Treasury or agency securities on the open market in substantial quantities,” Bernanke said.

But wait… This just in:

We have it from our usually unreliable source in Washington that Gideon Gono has been called in to aid the Obama administration. In secret talks, Gono has agreed to replace the outgoing Ben Bernanke, who is said to be going to work as a helicopter pilot. Gono will take over the Fed. And a new bill has already been designed — our source was able to sneak out a copy of the new note — for $1 million. That’s Gideon Gono’s picture on it.

According to reports, Gono insisted on getting his face on the bill as part of the deal. “Dead presidents are a dime a dozen,” he is said to have remarked. “And this is just the beginning; we can add zeros later.”

Asked what he thought of the worldwide credit crash, Gono replied:

“I sit back and see the world today crying over the recent credit crunch, becoming hysterical about something that has not lasted for even a year, and I have been living with it for 10 years. My country has had to go for the past decade without credit… Out of the necessity to exist, to ensure my people survive, I had to find myself printing money. I found myself doing extraordinary things that aren’t in the textbooks. Then the IMF asked the U.S. to please print money. I began to see the whole world now in a mode of practicing what they have been saying I should not.”

In Gono we trust. Our economy is in a terrible mess. We need inflation; only Gono seems to know how to get it.

Ed. Note: Hyperinflation is but one potential problem facing the U.S. economy. Luckily, readers of The Daily Reckoning email are better prepared than most for what might happen next. They receive regular offers to grow and maintain their wealth no matter what the market throws at them. If you’re not yet receiving The Daily Reckoning email, sign up for free, right here.