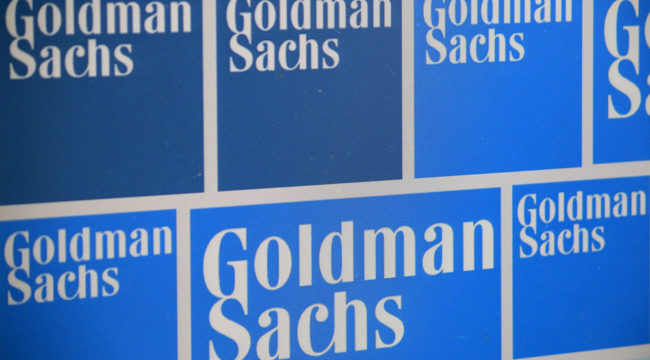 There’s not many tears being shed over Steve Bannon’s departure. His ethno-nationalist and protectionist worldview are opposite to true notions of liberty, free markets and a minimalist state.

While Bannonism presented itself as a coherent alternative ideology to mainstream Big Government, it actually boiled down to an incoherent potpourri of cultural resentments and prejudices, economic shibboleths and amateur historical theorizing. His message appealed to the alt-Right because it proposed to replace oppressive statism with a more right wing version rooted in protectionism and nativism.

Notwithstanding the rotten essence of Bannonism, however, the firebrand self-promoter who was the Donald’s chief strategist got it right in his parting shots at his internal White House enemies. In so many words, he correctly asserted that the nation will now be ruled by a Goldman Sachs Regency and a team of generals.

The move embodies the essence of Albert Einstein’s famous definition of insanity: Doing the same thing over and over and expecting a different result.

“The Trump presidency that we fought for, and won, is over,” Bannon told the conservative Weekly Standard on the Friday after his White House departure. “We will make something of this Trump presidency. But that presidency is over.”

The Donald will now function, as Robert Wenzel aptly described it, as “something of a tweet master frontman” with the Vampire Squid riding higher than ever before. Expect him to be riding even higher than when the George W. Bush handed a blank check to Wall Street for a bailout at the Treasury led by former Goldman CEO, Hank Paulson.

Goldman’s crew in the current White House – Gary Cohn, Steve Mnuchin, Dina Powell and Jared Kushner – are likely to bring about the final destruction of the Trump presidency. The cast of characters will eventually trigger a thundering collapse in the markets which will finally crush Goldman Sachs and its posse of gamblers and crony capitalist.

In the coming battles over crucial economic issues surrounding the debt ceiling, tax reform and healthcare, Trump will be getting the worst advice imaginable. The Donald will be pushed into attempting to make “bipartisan” deals that will blow the tenuous GOP majorities to smithereens, and do so in the name of status quo statism.

Right after Labor Day the destructive game plan of the Goldman Regency will show up in battles over a “clean” debt ceiling. Pundits make the move sound easy with the notion that GOP leadership only needs a modest number of Democrats to supplement their own rank and file votes to enact a debt ceiling increase. Such fiscal finesse would permit the government to borrow all the money needed to pay bills and protect the sacred credit rating of the U.S. Treasury.

Except it doesn’t work that way. If there is any cooperation at all, it will be only on the basis of a quid pro quo that requires Trump to give up the Wall, tax cuts, proposed deep domestic spending cuts and to fund the insurance bailouts required to forestall premium increases and coverage cancellations during the 2018 insurance (and election) year.

By demanding this kind of quid pro quo as a side deal, rather than as an explicit rider to the debt ceiling bill, it will have the same effect. The Freedom Caucus and the vast majority of conservative leaning congressional Republicans will jump ship.

Washington is heading for weeks of fraught indecision, backroom maneuvering and contentious political in-fighting that will scare the Wall Street casino that it is stuck in complacency.

The fact is that the market is breaking down beneath the shrinking number of Big Cap stocks and levitating averages. This has all set-up a severe downside shock within the coming weeks.

As to the market’s weakening internals, consider that there are 2,800 stocks on the New York Stock Exchange (NYSE). Back in early 2013 when the bull market was still being super-charged with massive QE purchases by the Federal Reserve, 85% or 2,380 of them were above their 200-DMA. By contrast, currently only 1,050 of them (37.5%) are above that level, meaning that the bull is getting very tired.

That vulnerability is also evident in other indices, but especially in the Russell 2000 (RUT). The index is a huge cross section of primarily domestic companies with an average market cap of just $2 billion. But the RUT is now 6.5% below its July 25 high of 1450, and, more importantly, has now plunged below its 200 displaced moving average after the huge bounce from the Trump Reflation euphoria.

The RUT is still trading at an absurd 88 times the reported net income of its constituent companies. When the market plunged into its mini-swoon of January-February 2016, the RUT dropped more than 200 points or 21% below its 200-DMA. That would be 1090 today – with much lower levels to come once the selling momentum accelerates.

It will do just that because the RUT is being fueled by huge inflows from several ETFs (iShares, Vanguard and SPDR all have a tracking ETF) and various other forms of passive indexing. The robo-machines and day-traders have not simply been voting for Trump and an incipient economic and profits boom. What they’ve been doing is chasing the index up a nearly 30% incline between early November 2016 and the July 25 peak shown in the chart below. Now they are now stranded in the nosebleed section of the outfield bleachers. 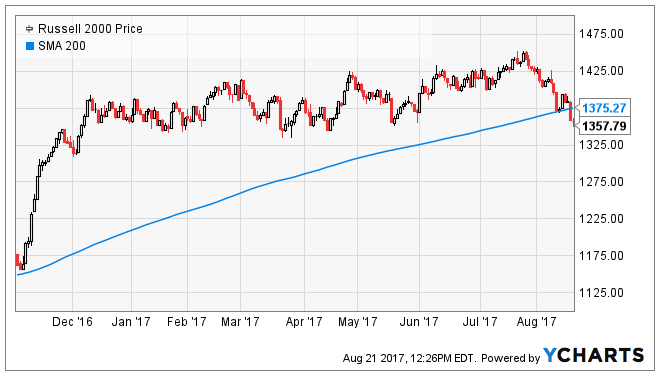 The same pattern is evident in the Dow Transports, as well. After peaking at 9,742 on July 14, the index is down by 6.4% and has dropped well below its 200-DMA. Moreover, there is no reason it should be even remotely at current levels based on real activity in the main street economy.

Nearly all measures of domestic activity are flat-lining and threatening to roll-over. That is clearly the case with car sales, brick and mortar retail, housing starts, restaurant traffic (July was down 4.5%) and much more. 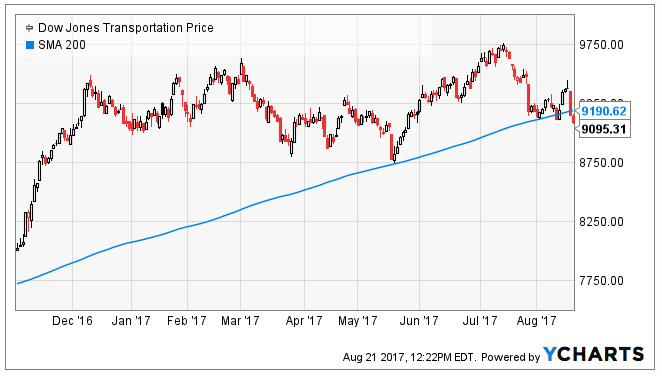 The idea that corporate profits are about to rebound sharply is getting steadily debunked by the so-called “in-coming data.” At $104 per share, the June twelve month earnings of the S&P 500 were still 2% below their September 2014 level. Current earnings of the Russell 2000 at $15.50 per share are actually 7.2% below their July 2015 level of $16.70.

It is only a matter of time before Wall Street gamblers discover they are home alone on the earnings front.  All this while gridlock in Washington will intensify suddenly and dramatically. The Treasury’s cash balance is now down to $82 billion, and at its current $2 billion burn rate per calendar day it will be gone by the end of September.

It will come as no surprise that Goldman Regency’s spokesman, Treasury Sec. Mnuchin, has been out once again insisting on a “clean” debt ceiling bill.

Treasury Secretary Steven Mnuchin, speaking at an event in Louisville, said that “we need to raise the debt limit and it’s my strong preference is that there’s a clean raise of the debt limit.”

While Mnuchin conceded that he is “all for spending controls” and Congress has the “absolute right and the absolute obligation” to oversee spending, the Treasury secretary issued another stark warning that “he’ll run out of authority by end-September to stay under the debt ceiling.”

This means that Congress will have just days to reach a compromise on the debt ceiling when it returns from recess. But this will not be the Congress of September 2008 that rolled-over to pass the bailout TARP bill at the insistence of Secretary Paulson. This time Goldman’s bag-man will be told “no dice.”

After all, the Dems now have a President to hound from office and the Freedom Caucus will not again be intimidated by Wall Street into obeisance. Expect a full throated war with the between Washington, Wall Street and the establishment that is attempting to overturn the 2016 election.

Bannon on the outside will likely prove to be the Goldman Regency’s worst nightmare. There is not a chance that while he is back at Breitbart he’ll tolerate a “capitulation to the left” deal for even a New York minute.