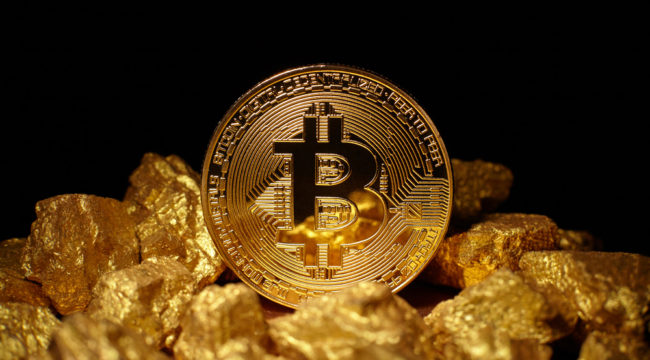 I write and speak a lot on gold. In contrast — and this surprises some people — bitcoin is my least favorite topic. I’m made my views known many times.

Still, interviewers love to get into the “gold versus bitcoin” debate. I continually get dragged into discussing bitcoin in interviews on TV, radio and the internet. So I discuss it whether I want to or not.

From my perspective, you might as well discuss gold versus watermelons or bicycles versus bitcoin. In other words, it’s a phony debate. I agree that gold and bitcoin are both forms of money, but they go their own ways.

There’s no natural relationship between the two (what traders call a “basis”). The gold/bitcoin basis trade does not exist. But people love to discuss it, and I guess Goldman Sachs is no different.

Goldman Sachs has released a new research report that comes down squarely on the side of gold as a reliable store of wealth rather than bitcoin, which is untested in market turndowns.

Precious metals like gold are “neither a historic accident or a relic,” said the report.

Goldman also reminds us that gold holds its purchasing better than cryptocurrencies and has much less volatility. In dollar terms, bitcoin has had seven times the volatility of gold this year.

Since Goldman’s research department has not been notable as a friend to gold, the fact that they favor gold over bitcoin is highly revealing in more ways than one.

I don’t deny that bitcoin has made some people multimillionaires, but I also believe it’s a massive bubble right now.

I don’t own any bitcoin and I don’t recommend it. My reasons have to do with bubble dynamics, potential for fraud and the prospect of government intrusion.

So bitcoin evangelists seem to think I’m a technophobe. But I’ve read many bitcoin and blockchain technical papers. I “get it” when it comes to the technology.

I even worked with a team of experts and military commanders at U.S. Special Operations Command (USSOCOM) to find ways to interdict and disrupt ISIS’ use of cryptocurrencies to fund their terrorist activities.

I will say, however, that I believe in the power of the technology platforms on which the cryptocurrencies are based. These are usually called the “blockchain,” but a more descriptive term now in wide use is “distributed ledger technology,” or DLT.

So although I am a bitcoin skeptic, I believe there is a great future for the blockchain technology behind them.

I’m not telling anyone not to own cryptocurrencies, but you need to do your homework before you do.