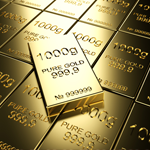 Gold and the Direction of Travel

Yes, the real rate of interest matters to gold. But not as much as its direction…

Wall Street and the City are coming to decide that gold is a sell. Because interest rates, they reason, are set to rise sooner than they used to imagine.

This professional money is only half-wrong. Central banks aren’t about to hike the returns on cash savings, which have been a wasting asset pretty much non-stop since 2007.

But when the central banks do move to defend the real value of cash by hiking rates — or stop beating up short-term rates so badly that longer-term rates start to rise — gold is likely to suffer. Just so long as those hikes actually outpace inflation. Because it’s the direction of travel which matters, not any particular level.

See the two fake-outs below? The first, in the mid-1970s, saw gold prices halve in just 18 months, even though the real rate of interest stayed below zero for much of that time.

And once the direction of travel in real interest rates turned around again, gold prices began the second leg of their 1970s’ bull market, rising 8-fold between the end of 1976 and the start of 1980.

The second feint came in early 2009, when T-bond yields held steady but inflation went negative on the official CPI index at least. The gold market didn’t buy for one second the idea that real rates would stay positive. The Fed wouldn’t allow it, gold buyers reasoned (whether they knew it or not). Which now looks a smart call.

Since then, the very worst real rates were offered in September 2011, right when the Dollar gold price hit its current peak of $1920 per ounce. Since then real rates have crept higher. No, today’s mere 0.4% might not sound like much. But it’s been enough to flatline the gold bull.

Do you think the Fed will now allow or reverse these above-zero debt costs for the US Treasury?

Adrian Ash
for The Daily Reckoning

Formerly the City correspondent for The Daily Reckoning in London and head of editorial at Fleet Street Publications Ltd, the U.K.’s leading financial advisory for private investors. Adrian Ash is also the editor of Gold News and head of research at BullionVault.