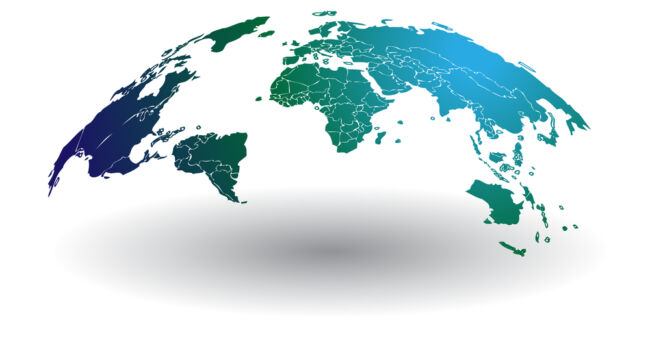 A popular claim is that the 1918–19 flu pandemic killed millions but no biggie, the Roaring ’20s started the following year. It’s onward and upward, baby, once we toss the masks.

The drivers of the past 75 years of growth — globalization and financialization — are dead, and so is everything that depended on them for “growth.”

Just as a shark dies if it stops swimming forward, globalization and financialization die once they stop expanding, because their viability depends on expansion.

Globalization and financialization have been losing momentum for years.

Under the guise of “opening markets,” globalization has strip-mined every economy that can’t print a reserve currency and hollowed out economies globally as only globally competitive sectors survive globalization.

The net result is that once vibrant, diversified economies have been reduced to fragile monocultures completely dependent on global flows of capital and spending for their survival.

Tourism is a prime example: Every region that has seen its local economy crushed by global corporations, leaving global tourism as its sole surviving sector, has been devastated by the drop in tourism, which was always contingent on disposable income and credit expanding forever.

But credit can’t expand forever, as it eventually runs out of income to service additional debt.

Financialization is not just the expansion of credit and leverage to marginal borrowers; it’s also legalized looting, as the true risks of soaring debt and leverage are hidden in obscure financial instruments and bogus claims of “safety” and “hedging.”

Excesses of debt and leverage funneled into risky speculations inevitably end in default.

Financialization manifests as asset bubbles and hyperconsumption as people who never had credit spend up to the credit limits and beyond.

Both asset and consumption bubbles pop, pushing the financial sector that feasted off the unsustainable expansion of credit into insolvency.

In other words, neoliberal globalization and financialization — essentially one dynamic — are inherently destabilizing, as all the incentives are perverse.

And that has real consequences.

Food security, to take a basic example, is impossible once globalization has destroyed local agricultural production, and financialization has rewarded factory-farming since Big Ag can borrow capital at scales that only make sense in a world of globalized monoculture agriculture.

Everyone touting 1919 as the model for 2020 is deeply ignorant of history and the destructive ontologies of globalization and financialization. There is virtually no overlap between the world of 1919 and the world of 2020 in terms of financial structures and excesses.

That globalization and financialization are dead is revealed by what Federal Reserve bailouts and fiscal free-for-alls cannot do:

4. They cannot reflate asset and consumption bubbles that have popped.

9. The Fed can buy impaired debt, but that doesn’t change their abject powerlessness (points 1–7 above).

Financialization was never sustainable, and neither was the destructive globalization it enabled.

Any system that depended on the ever-expanding exploitation of new resources, debtors and markets could never be anything but fragile. The ferociousness of its rapacity masked its inherent weakness, a weakness that is now exposed as fatal.

But let’s stick to the U.S. alone for now. The pandemic is having a dramatic long-term effect on Main Street local tax revenues.

To understand how, we need to consider first- and second-order effects.

The immediate consequences of lockdowns and changes in consumer behavior are first-order effects: closures of Main Street, job losses, massive Federal Reserve bailouts of the top 0.1%, loan programs for small businesses, stimulus checks to households that earned less than $200,000 last year and so on.

The first-order effects of the pandemic on Main Street are painfully obvious: Small businesses that have barely kept their heads above water as costs have soared have laid off employees as they’ve closed their doors.

The second-order effects are still spooling out: How many businesses will close for good because the owners don’t want to risk losing everything by chancing reopening?

How many will give it the old college try and close a few weeks later as they conclude they can’t survive on 60% of their previous revenues?

How many enjoy a brief spurt of business as everyone rushes back, but then reality kicks in and business starts sliding after the initial burst wears off?

How many will be unable to hire back everyone who was laid off?

Falling off a Cliff

As for local tax revenues based on local sales taxes, income taxes, business license fees and property taxes: The first three will fall off a cliff, and if cities and counties respond to the drop in tax revenues by jacking up property taxes, this will only hasten the collapse of businesses that were already hanging on by a thread before the pandemic.

The federal government can bail out local governments this year, but what about next year, and every year after that?

The hit to local tax revenues is permanent, as the economy became dependent on debt and financialization pushed costs up.

Amazon and online sellers don’t pay local taxes except in the locales where their fulfillment centers are located.

Yes, online sellers pay state and local sales taxes, but these sales are for goods; most of the small businesses that have supported local tax revenues are services: bars, cafes, restaurants, etc.

As these close for good, the likelihood of new businesses taking on the same high costs (rent, fees, labor, overhead, etc.) is near zero, and anyone foolish enough to try will be bankrupted in short order.

Now that working at home has been institutionalized, the private sector no longer needs millions of square feet of office space. As revenues drop and profits vanish, businesses will be seeking to cut costs, and vacating unused office space is the obvious first step.

Trying to Get Blood From a Stone

If demand is near zero, the value is also near zero. Local governments will be desperate to raise tax revenues, and they will naturally look at bubble-era valuations on all real estate as a cash cow. But they will find that raising property taxes on money-losing properties will only accelerate the rate of property-owner insolvencies.

This doesn’t exhaust the second-order effects: Once Main Street is half-empty, the attraction of the remaining businesses declines; there’s not enough to attract customers, and the virtuous circle of sales rising for everyone because the district is lively and attractive reverses: The survivors struggle and give up, further hollowing out the district.

The core problem is the U.S. economy has been fully financialized, so costs are unaffordable.

The commercial property owner overpaid for the buildings with cheap borrowed money, and now the owner must collect nosebleed-high rents or he can’t make the mortgage and property tax payments.

Local governments spend every dime of tax revenues, as their costs are insanely high as well. They cannot survive a 10% decline in tax revenues, much less a 40% drop.

The Lesson of Yellowstone

The metaphor I’ve used to explain this in the past is the Yellowstone forest fire. The deadwood of bad debt, extreme leverage, zombie companies and all the other fallen branches of financialization pile up.

But the central banks no longer allow any creative destruction of unpayable debt and misallocated capital; every brush fire is instantly suppressed with more stimulus, more liquidity and lower interest rates.

As a result, the deadwood sapping the real economy of productivity and innovation is allowed to pile higher. 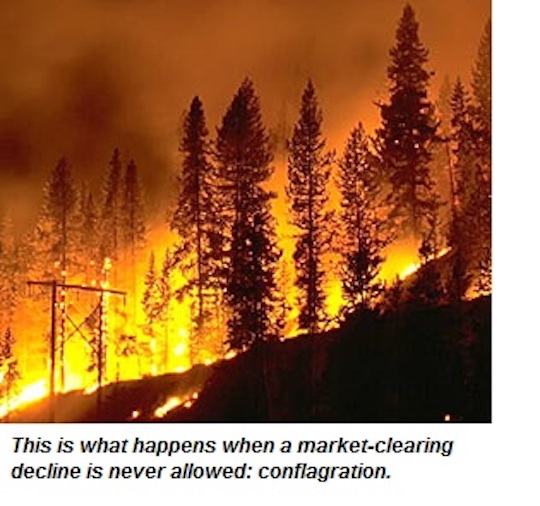 The only possible output of this suppression is an economy piled high with explosive risk.