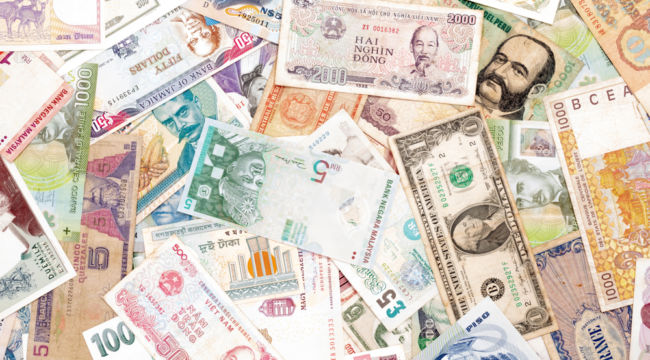 Since Federal Reserve resources were barely able to prevent complete collapse in 2008, it should be expected that an even larger collapse will overwhelm the Fed’s balance sheet.

The specter of a global debt crisis suggests the urgency for new liquidity sources, bigger than those that central banks can provide. The logic leads quickly to one currency for the planet.

The task of re-liquefying the world will fall to the IMF because the IMF will have the only clean balance sheet left among official institutions. The IMF will rise to the occasion with a towering issuance of special drawing rights (SDRs), and this monetary operation will effectively end the dollar’s role as the leading reserve currency.

The IMF could function like a central bank through more frequent issuance of SDRs and by encouraging the use of “private SDRs” by banks and borrowers.

What exactly is an SDR?

The SDR is a form of world money printed by the IMF. It was created in 1969 as the realization of an earlier idea for world money called the “bancor,” proposed by John Maynard Keynes at the Bretton Woods conference in 1944.

There’s a formula for determining that, and as of today there are five currencies in the formula: dollars, sterling, yen, euros and yuan. Those are the five currencies that comprise in the SDR calculation.

The important thing to realize that the SDR is a source of potentially unlimited global liquidity. That’s why SDRs were invented in 1969 (when the world was seeking alternatives to the dollar), and that’s why they will be used in the imminent future.

At the previous rate of progress, it may have taken decades for the SDR to pose a serious challenge to the dollar. But as I’ve said for years, that process could be rapidly accelerated in a financial crisis where the world needed liquidity and the central banks were unable to provide it because they still have not normalized their balance sheets from the last crisis.

“In that case,” I’ve argued previously, “the replacement of the dollar could happen almost overnight.”

We’re facing a global financial crisis worse even than 2008. That’s because each crisis is larger than the previous one. The reason has to do with the system scale. In complex dynamic systems such as capital markets, risk is an exponential function of system scale. Increasing market scale correlates with exponentially larger market collapses.

This means a market panic far larger than the Panic of 2008.

SDRs have been used before. They were issued in several tranches during the monetary turmoil between 1971 and 1981 before they were put back on the shelf. In 2009 (also in a time of financial crisis). A new issue of SDRs was distributed to IMF members to provide liquidity after the panic of 2008.

The 2009 issuance was a case of the IMF “testing the plumbing” of the system to make sure it worked properly. With no issuance of SDRs for 28 years, from 1981–2009, the IMF wanted to rehearse the governance, computational and legal processes for issuing SDRs.

The purpose was partly to alleviate liquidity concerns at the time, but also partly to make sure the system works in case a large new issuance was needed on short notice. The 2009 experience showed the system worked fine.

On Jan. 7, 2011, the IMF issued a master plan for replacing the dollar with SDRs. This included the creation of an SDR bond market, SDR dealers, and ancillary facilities such as repos, derivatives, settlement and clearance channels, and the entire apparatus of a liquid bond market. A liquid bond market is critical.

The IMF study recommended that the SDR bond market replicate the infrastructure of the U.S. Treasury market, with hedging, financing, settlement and clearance mechanisms substantially similar to those used to support trading in Treasury securities today.

In November 2015, the Executive Committee of the IMF formally voted to admit the Chinese yuan into the basket of currencies into which an SDR is convertible.

In July 2016, the IMF issued a paper calling for the creation of a private SDR bond market. These bonds are called “M-SDRs” (for market SDRs) in contrast to “O-SDRs” (for official SDRs).

In August 2016, the World Bank announced that it would issue SDR-denominated bonds to private purchasers. Industrial and Commercial Bank of China (ICBC), the largest bank in China, will be the lead underwriter on the deal.

In September 2016, the IMF included the Chinese yuan in the SDR basket, giving China seat at the monetary table.

Over the next several years, we will see the issuance of SDRs to transnational organizations, such as the U.N. and World Bank, to be spent on climate change infrastructure and other elite pet projects outside the supervision of any democratically elected bodies. (I call this the New Blueprint for Worldwide Inflation.)

The SDR can be issued in abundance to IMF members and can also be used in the future for a select list of the most important transactions in the world, including balance-of-payments settlements, oil pricing and the financial accounts of the world’s largest corporations, such as Exxon Mobil, Toyota and Royal Dutch Shell.

So the international monetary elite has been awaiting the global liquidity crisis that we’re facing right now. In the not-too-distant future, there will be massive issuances of SDRs to return liquidity to the world. The result will be the end of the dollar as the leading global reserve currency.

SDRs will perhaps never be issued in bank note form and may never be used on an everyday basis by citizens around the world. But even such limited usage does not alter the fact that the SDR is world money controlled by elites.

You’ll still have dollars, but they’ll be local currency like the Mexican peso, for example. But its global dominance will end.

Based on past practice, we can expect that the dollar will be devalued by 50–80% in the coming years.

A devaluation of this magnitude will wipe out the value of your life’s savings. You’ll still have just as many dollars, but they won’t be worth nearly as much.

Individuals will not be allowed to own SDRs, but you can still protect your wealth by buying gold — if you can find any.