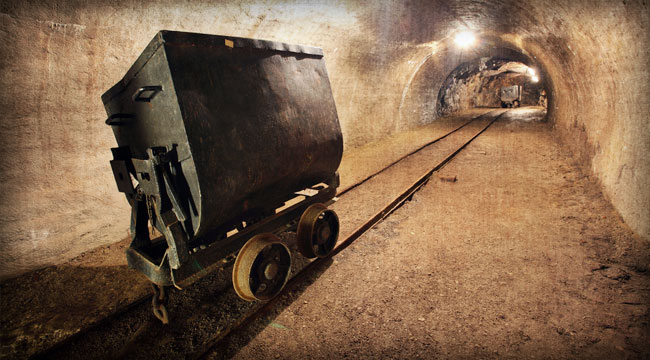 Get Ready for the Gold Mining Comeback

I was in Toronto for a couple of days earlier this month. Among other things, I visited one of Canada’s most successful, small-cap resource investors. Over the years, this gent has moved billions of dollars into early-stage mine and energy developers.

Then, he has helped move many of them through periods of fortune building growth. In good times and bad, the guy seems to know how to find great companies — and to make money. What can we learn?

Over green tea and organic health crackers, we commiserated over the share price crash of many gold miners — large and small — in the past two years; and despite many well-known issues, amidst investment ruins, we found reasons for hope.

Let’s start with a chart. Here’s the five-year gold price fix, with 60- and 200-day moving averages. 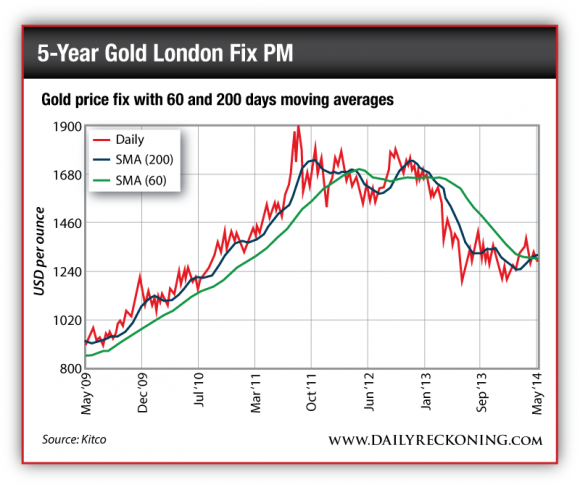 Early last year, in the first quarter of 2013, gold miners started to experience a major sell-down in pricing. From former prices as high as $1,900, gold prices tumbled to the $1,200 range between January and July 2013.

“Gold prices dropped over 30% in just a matter of months,” said the Canadian. “All of a sudden, investors realized that most gold miners had thin, even miniscule margins. Or they were LOSING money, if you can believe that! It’s because many management teams were doing a really piss-poor job of allocating capital.”

Thus, in 2013, the mining industry witnessed a mad scramble as companies cut costs. Their efforts included significant layoffs and project deferrals, as well as an ongoing, frantic search for operational efficiencies. What happened?

“Look at the first quarter earnings of Goldcorp (NYSE:GG), Agnico-Eagle Mines (NYSE:AEM), New Gold Inc. and even Barrick Gold (NYSE:ABX),” said the Canadian investor. “They’re all making progress on the cost side of the ledger.”

Indeed they are. Just this week, Goldcorp reported “all-in sustaining costs” of $840 an ounce for the first quarter. This number beat Goldcorp’s previous forecast, and marks a major reduction from the $1,134 per ounce metric in the same quarter of 2013.

Agnico Eagle did not break out quarterly all-in sustaining costs for recent months; however, management stated that costs for the full year 2014 should be below prior guidance of $990 per ounce.

Barrick’s costs were down by $100 per ounce, to an estimated $833. New Gold announced that all-in sustaining costs dropped $239 per ounce, year-over-year, to $908 an ounce. Eldorado Gold announced first quarter production costs of a remarkably low $786 per ounce.

“Keep in mind,” said the Canadian investor, “that not all of these cost reductions are due to brilliant management. I know most of these guys, and nobody is really that good, such that they can move their needle that fast. A lot of that so-called ‘cost-improvement’ has to do with changing the mix of ore grade that engineers run through the plants. That is, they opened up the usually-locked doors on those ‘magic stopes’ in the mines, and pulled out high grades that they normally keep under wraps for special occasions. Like now, when they need to impress Wall Street.”

“Lower internal costs are all well and good,” he continued. “Share prices seem to have found a floor; the downside for investors is limited, I’d say. But lowering internal costs doesn’t recreate the momentum of 2011 and earlier. That momentum is still lacking, I’d say. Looking ahead, for big share price moves, we need to see firm, upward, sustained movement in gold prices. That’s probably a function of big, macro-economic issues, perhaps world politics and the broad investment cycle turning.”

I asked him about the investment cycle. “Look,” he said the investor. “Right now, the market loves tech, tech and more tech. That, and biotech. Or dividend plays. Tech and yield, basically. But if enough people get burned? Another tech pullback or crash? A big, unexpected bankruptcy by a dividend payer that runs short of cash? Well, it’ll be back to gold, which can go down, but never down to zero.”

What kind of mining plays have the best leverage? For example, there are small-cap plays with phenomenal potential. We discussed one small-cap miner that this investor has funded to develop a string of claims in the Precambrian “greenstone belt” of Manitoba.

“It’s a great company, with a super-strong exploration program,” declared the investor. “They almost never drill a bad drill hole. Everything finds something, one way or another. They’ve scoped out a significant mineralization range, and a sizeable ore body. Plus, it’s a very efficient discovery because we’ve got a stockpile of old cores from past work, which management is continually re-assaying. Every few months, like clockwork, they add gold and silver to the resource base. This small company is takeout bait for at least an intermediate-sized miner; but right now, the market just doesn’t care. It’s okay; we can afford to be patient with this one. Our time will come.”

I asked if he saw inflation lurking, which could drive gold prices. “Absolutely,” he replied. “Inflation is baked into the cake. Heck, we’re inside the bakery, there are so many cakes with inflation baked in. We already see inflation with food, and we’re one bad harvest away from supermarket sticker-shock across the world. Energy could also explode upwards with just a few tweaks of the world production cycle.”

When it comes to government policies, the investor is depressingly sanguine. “It seems like most Western nations don’t want to run themselves as long-term propositions,” he said. “Live for today, the current political cycle and news cycle. The heck with tomorrow. But like I said with some of the gold miners, we can be patient; our time will come.”

Ed. Note: When the time comes and gold miners start seeing huge profit potential, you can be Byron will be right there to grab some huge gains for his readers. That’s why, in today’s Daily Reckoning email edition, readers were given a chance to discover his most in-depth research first-hand – and all of the potential profits that come with it. Don’t miss out on this and other great opportunities offered exclusively from The Daily Reckoning. Sign up for FREE, right here.