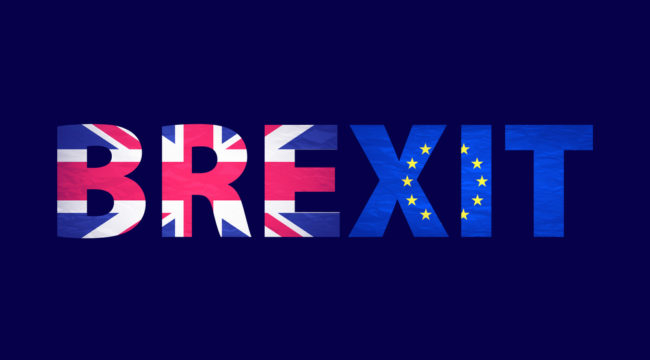 Get Ready for Brexit II

Markets were shocked when UK voters chose to leave the European Union, EU, on June 23, 2016. That was the so-called “Brexit” or British exit from the EU. Within hours of the vote becoming official, the pound sterling, GBP, plunged 13% against the dollar, and gold soared 8% in dollar terms, even more measured in GBP.

I was among the few to prepare investors for that shock. In the days before the vote, I urged my readers to short GBP and buy gold. Those who did made huge gains. Some readers even wrote to me to say thanks for paying their kids’ college tuitions for that year — that’s how much money they made.

Now a new political and economic earthquake is about to hit the UK. Think of it as “Brexit II.” The market shocks will be just as great as the original Brexit almost a year ago today. And the opportunities for huge gains in the UK now are as great as they were during Brexit. 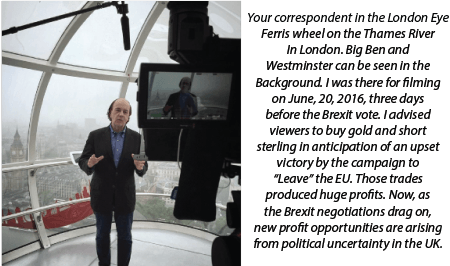 In the months that followed the Brexit vote, markets stabilized, as is often the case after a shock. GBP fell from $1.49 the day of the vote to $1.21 a few months later. Since then it has traded in a narrow range of about $1.20 to $1.30.

The UK stock market as measured by the FTSE 100 index also fell sharply in the immediate aftermath of the original Brexit vote. The FTSE 100 index fell from 6,338 the day of the vote to 5,982 just a few days later; a 5.6% drawdown.

But, then stocks sounded the “all clear” siren. The FTSE quickly made up its lost ground and got back to pre-Brexit levels within a few days. Markets saw that Brexit was not an instantaneous process, but would take years to negotiate.

The Prime Minister who called for the Brexit vote, David Cameron, quickly resigned after the vote and a new Conservative government was formed, led by Theresa May. There was hope for a so-called “soft” Brexit where the UK would formally leave the EU, but retain many of its free trade and tariff benefits in exchange for some concessions on immigration.

Since last summer, the FTSE has gone on to achieve a new all-time high of 7,547 and still trades very close to that high as of today. The high represents a stunning 26% rally in less than one-year from the post-Brexit lows. This rally was based on better than expected growth in the UK, lower than expected inflation, and indications that Theresa May had the Brexit negotiations well in hand.

In fact, Theresa May’s government was so confident of its popularity, and the strength of the UK economy, that on April 18 she called for “snap” elections to be held on June 8. Under the UK parliamentary system, May did not have to hold elections until 2020, but she could call for elections at any time, the so-called snap election.

May’s reason for calling the election was to improve her bargaining position in the upcoming Brexit negotiations with the EU. As I noted earlier, negotiations begin today, June 19. They are expected to last for two years with completion in 2019. There are many difficult issues to be negotiated, including access for the EU single market, immigration, and the size of the “divorce” payment the UK will have to pay the EU in exchange for access.

May’s Conservative Party had a thin 17-seat majority prior to the snap election. The President of the European Commission, Jean-Claude Juncker, secretly encouraged May to hold the elections in order to increase her majority and improve her bargaining power.

The view was that with the UK economy doing well and the stock market soaring to new all-time highs, May’s popularity would propel her to a smashing victory and give her the leverage she needed to sell the British voters on some of the unpalatable costs of Brexit.

Initially, things went according to plan. Polls in late April and early May showed that the Conservatives were heading for a landslide victory. Theresa May appeared set to become the most powerful UK Prime Minister since Margaret Thatcher, the “Iron Lady.”

Then it all went wrong. The Conservatives advanced tax cuts and National Health Service reforms that seemed to favor the rich and hurt the poor. Several Conservative MP’s got caught up in scandals and conflicts of interest. May herself ran a lackluster campaign, and she appeared weak in the face of three deadly terrorist attacks.

Most surprisingly, May’s opponent, Labour Party leader Jeremy Corbyn, turned out to be a far more effective candidate than was expected. From a U.S. perspective, he looked like Bernie Sanders, an old left-wing progressive with surprising appeal to young voters.

The election itself was a disaster for May’s Conservatives. They lost seats and failed to hold onto a majority in parliament. The only way May could keep power was to form a coalition government with the small Democratic Unionist Party of Northern Ireland, DUP, which won 10 seats in the election.

When combined with the Conservative’s 318 seats, the DUP’s 10 seats gave the coalition 328 seats — barely more than the 326 seats May needed to keep control of parliament.

Although markets could see this result coming based on polls taken immediately before June 8, the full implications and market impact have yet to sink in. The shockwaves from this “Brexit II” will be just as great as the first Brexit in 2016.

The first problem is that the Conservative coalition with DUP is not a done deal. It may be nothing more than a marriage of convenience in which DUP agrees to vote with the Conservatives on some key measures, but otherwise keeps their distance and do not join in a formal coalition.

In that case, May’s ability to drive a hard bargain on Brexit is greatly diminished because she is in constant danger of losing DUP support and having to call new elections.

More ominously for May, her own party leaders are highly dissatisfied with her decision to call the snap election in the first place, and her disastrous campaign. They may seek to replace her with another party leader, possibly the nationalist Boris Johnson, sometimes described as the “Donald Trump of the UK.”

Johnson’s ascension would lead to more acrimonious Brexit talks and possible exclusion of the UK from many EU trading privileges, hurting UK companies and stocks.

Europe has not been standing still while this drama plays out. The solid victory of Emmanuel Macron in France, and Angela Merkel’s increased popularity in Germany, have led to the closest Franco-German cooperation in years. The Macron-Merkel united front is one more reason to believe the Brexit negotiations will not go well for the UK.

Waiting in the wings is Labour leader Jeremy Corbyn. If the DUP alliance with the Conservatives falls apart, or Theresa May is replaced as the Conservative leader, new elections will almost certainly follow. In that case, Corbyn’s newfound popularity could result in an outright Labour victory. The result would be higher taxes, higher interest rates, and intense pressure on UK stocks.

Regardless of which scenario plays out, markets will be facing uncertainty for months to come. That in itself is one reason for stock prices to retreat. Markets can adjust to almost any state of affairs, but have great difficulty pricing for uncertainty. The effort to do so almost always results in lower stock prices as investors hedge their bets or go to cash and gold.

Independently of the UK’s internal political uncertainty and the cloud cast on the Brexit negotiations, the UK economy appears to be slowing rapidly. Average income gains have masked an extreme income disparity that favors the rich and leaves working-class British behind. Home prices are cooling off, inflation has increased, and growth has slowed substantially.

UK stocks look significantly overpriced on economic fundamentals alone. They appear doubly overpriced once the full impact of the political turmoil and the coming difficulties in the Brexit negotiations are factored in.

But don’t think that the economic and financial effects will be limited to the UK. The U.S. markets will also be heavily impacted by the ongoing drama.