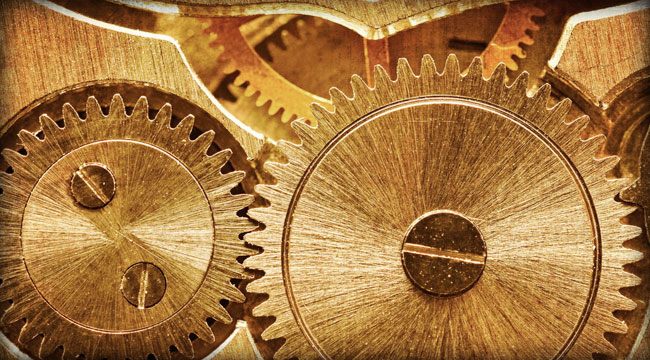 Gearing up for Gold Season

Traders stampeded out of gold, emerging markets and bonds this month, setting record monthly outflows in June. Ever since the Federal Reserve hinted in May that signs of a stronger economy could allow for a slowdown of stimulus, markets have protested the news.

Gold has been hit hard by the tapering talk and resultant rising interest rates and liquidity drain, falling below $1,200 at the end of June for the first time since August 2010. We’re also seeing India, the world’s biggest gold buyer, trying to stifle gold demand. As the government seeks to reduce its record current account deficit, it has hiked import tariffs on gold to 8% and introduced new constraints on rural lending against gold jewelry and coins. Ross Norman, CEO of bullion broker Sharps Pixley, said, “It’s almost as if the finance ministry is waging war on the gold sector, which would suggest that they feel they have lost control of the economy to some extent. In that environment, you would want to own gold more than ever.”

Other factors fueling the liquidation were the raising of margin requirements on gold by the CME Group, the largest operator of futures exchanges in the U.S., and global liquidity concerns in the U.S. and China. When the country with the largest GDP in the world and the country with the largest population on Earth have liquidity concerns, traders run from stocks, bonds and gold and head to cash. Even though gold traders have pulled out of their financial investments, there has been a surge in physical gold buying and central bankers have maintained their positions.

We maintain that gold is in extremely oversold territory and mathematically due for a reversal toward the mean. Yet when gold prices plummet, fear takes over and some investors forget the fundamental reasons to own gold: Gold is a portfolio diversifier and a store of value. It is a finite resource with increasing global demand. I co-authored a book on gold five years ago based on a lifetime of experience with the metal. My advice hasn’t changed since then. When it comes to gold, moderation is key. Don’t try to get rich with gold, because the corresponding risk is simply too high. Limit your exposure to gold as an asset class to 10% of your portfolio — no more than 5% in bullion and 5% in equities. Rebalance each year to keep that level of exposure and use volatility to your advantage. 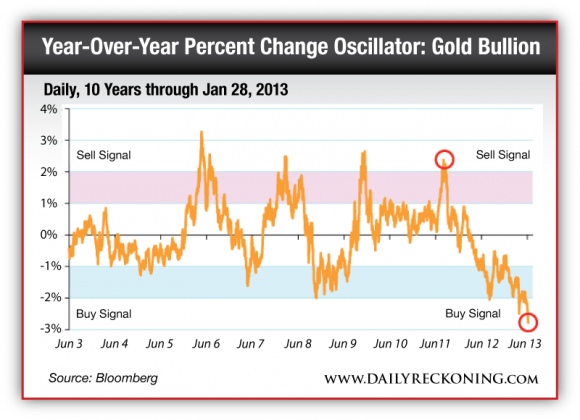 There seems to be an inherent emotional bias against gold by many in the financial media and among money managers, especially after gold corrects. Billions of dollars lost in gold make for sensational headlines, yet two darling technology stocks have also taken it on the chin. I find it interesting that the naysayers aren’t talking about the fact that Facebook and Apple have caused more destruction in market capitalization over the past year than the biggest gold ETF. The chart below puts the magnitude of decline in context. 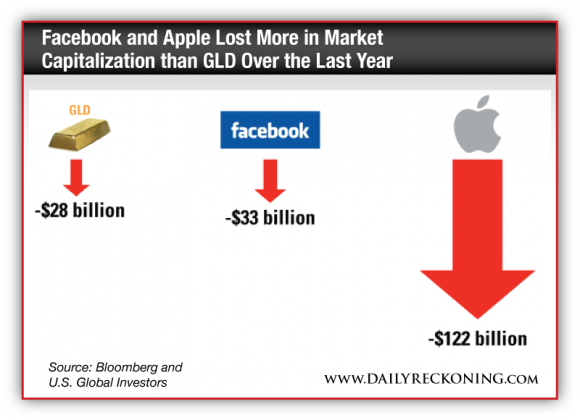 Why is it that gold still struggles for acceptance as a permanent asset class? I, too, enjoy catching up with Facebook friends on my iPad, but I have more faith that millions of people in Asia and the Middle East will continue to adore the precious metal long after the novelty of Facebook and iPads wears off.

In many parts of the world, this deep cultural affinity for gold is expressed through the giving of gold coins and jewelry for momentous occasions. Gold will soon be entering its historical period of seasonal strength with Ramadan beginning in July, followed by the Indian Festival of Lights, wedding season and Christmas. We have often published on the impact of this powerful seasonal pattern. 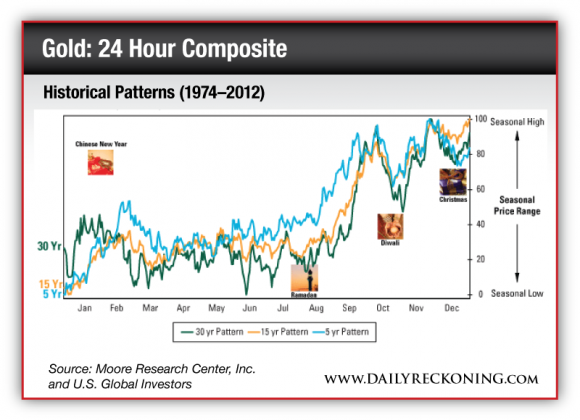 In addition to spooking the gold market, the likelihood of the Fed ending its easing also had investors fleeing fixed income investments. Rising interest rates and falling prices led to June bond fund outflows shattering the previous record set in October 2008. Yet downward revisions of economic data suggested that while the economy may be steadily improving, there aren’t yet signs of spectacular growth. In response, bond yields retreated by the end of last week. We see the exodus as an entry point for investors who may have been nervous about getting into the bond market.

Fed fears reached far and wide as emerging market equities also experienced record outflows this month as the sell-off extended to Latin America, Europe and Asia. Renewed worries over Chinese growth and concerns with tightening financial conditions accelerated the flight from emerging markets. Money that had been made in recently hot markets was pulled out, further drying up liquidity. We continue to see opportunity in emerging markets, where we seek out undervalued dividend-paying companies with growth prospects.

From time to time, in bull and bear markets, prices and fundamentals disconnect. Prices can swing too far on fear and rise too fast on greed. We believe fundamentals remain solid and much of the short-term swings are much ado about nothing. In volatile markets, it is important to trust your investment processes and asset allocation disciplines.

Ed. Note: In The Daily Reckoning email edition — in which this essay was featured — we regularly offers subscribers specific ways to play the up-and-down gold market. If you’re not yet receiving the DR email, you’re missing out. Click here to sign up for free and get The Daily Reckoning delivered straight to your inbox every day around 4 p.m.