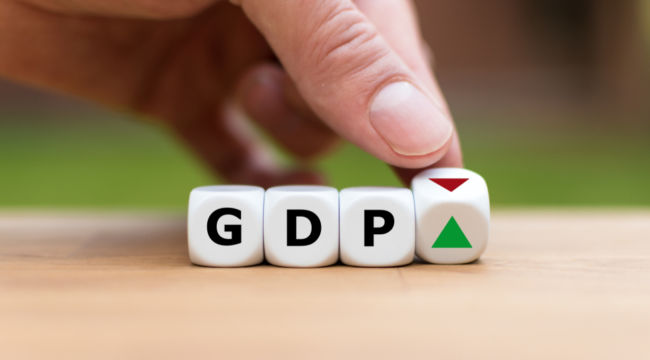 “Is Slow Still the New Normal for GDP Growth?”

The Federal Reserve Bank of San Francisco raises the question… and proceeds to answer it:

Estimates suggest the new normal pace for U.S. GDP growth remains between 1.5% and 1.75%, noticeably slower than the typical pace since World War II…

A larger challenge is productivity. Achieving GDP growth consistently above 1.75% will require much faster productivity growth than the United States has typically experienced since the 1970s.

Productivity — as we have argued prior — is the spring of enduring prosperity.

Productivity growth transformed these United States from a bucktoothed backwater into a global behemoth… a modern Colossus bestride the world.

Average productivity has languished between 0–2%.

We have previously implicated Richard Nixon and his 1971 murdering of the gold standard.

The gold standard, though a sad caricature in its dying days, nonetheless enforced an honesty.

A wastrel nation that consumed more than it produced would eventually run through its gold stocks.

The fiat dollar, the unbacked dollar, lifted the penalty.

A liberated Federal Reserve finally broke loose from its golden shackles… spread its nets… and ensnared the nation in debt.

The stagnation of productivity growth started in the early 1970s. To be precise it was the result, in part, of the removal of the gold standard and the resulting freedom the Fed was granted to foster more debt… Over the last 30 years the economy has relied more upon debt growth and less on productivity to generate economic activity.

But the emerging American economy left behind the grimy toil of the factory floor and the workbench…. and headed for Wall Street.

It went chasing after the fast buck — the easy buck.

The financialization of the American economy was underway.

And like spreading weeds, finance choked the path of labor…

The bottom 90% of American earners advanced steadily from the early 1940s through the early 1970s.

But they’ve been sliding back ever since — or held even at best.

In contrast we find the top 1% of earners…

But beginning around 1980 they went leaping ahead… and began showing society their dust: 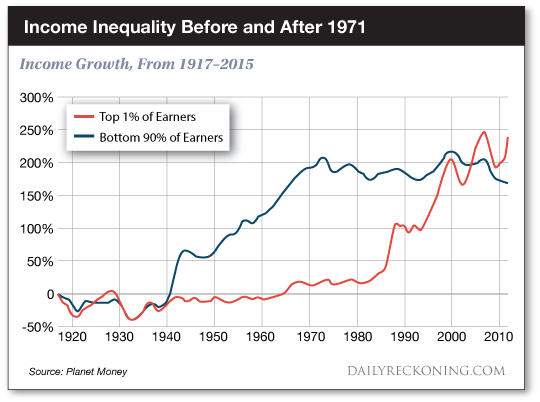 But perhaps we can declare the race a wash.

Labor’s loss is simply capital’s gain. And the economy as a whole comes out even. Perhaps the transaction even benefits it.

But has it? Has the United States economy benefited from financialization?

The facts may run precisely the other way…

The financial sector has drained as much as $22 trillion from the United States economy:

What has this flawed financial system cost the U.S. economy?… We estimate these costs by analyzing three components: (1) rents, or excess profits; (2) misallocation costs, or the price of diverting resources away from nonfinancial activities and (3) crisis costs, meaning the cost of the 2008 financial crisis. Adding these together, we estimate that the financial system will impose an excess cost of as much as $22.7 trillion between 1990 and 2023, making finance in its current form a net drag on the American economy.

Meantime, we sag and groan under majestic mountains of debt.

A financialized economy demands perpetually increasing credit — debt, that is — to keep the show going.

Servicing that debt absorbs increasing amounts of society’s income. That in turn leaves less to save… and to invest in productive assets.

It is a dreadful cycle.

Eventually it leaves the cupboards bare… and the future empty.

One percentage point may seem a trifle. And one year to the next it is.

But Jim Rickards calculates the United States would be $4 trillion richer — had the 3.22% trend held this decade.

Below, George Gilder shows you how real money could “work miracles of growth.” Read on.