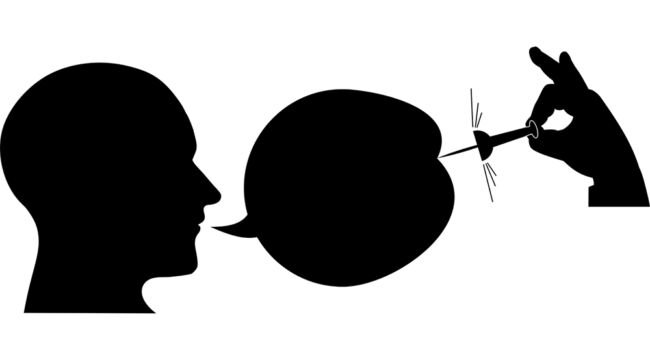 Free Speech in Russia and America

A Russian anti-war protester — bearing a message in two languages — recently streaked across a Moscow newsroom: 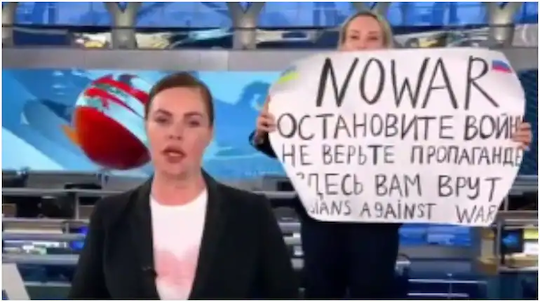 This woman in question had evidently labored for the very same “news” organization. The United States media instantly shrieked with glee…

What a heroic soul, they gushed. She has defied Mr. Putin before the world’s watching eyes. Solzhenitsyn himself had nothing on her.

In a pre-recorded video this First Amendment heroine explained herself:

American media naturally feared her transgression would ticket her for the gulag… if not the wall… once Vladimir’s goons collared her.

Fined $280 for an “Administrative Offense”

Yet what happened to this anti-Putin, Russian subversive? Precisely this:

She was fined 30,000 roubles (roughly $280) for an “administrative offense.” She was released one day later to face future trial.

We suspect our media were somewhat let down. We believe they inwardly yearned for a much rougher handling of her. They could then denounce the Russian brute for his strangulation of speech and strong-arming of dissent.

Alas, the lady was cited for an administrative offense.

Let the record reflect: We concede at once that Mr. Putin is a propagandist and a geyser of lies. That is, he is a successful, if somewhat ungentlemanly, politician.

We cite this example not to absolve Mr. Putin of his grave and multiplying atrocities — but to stand the American media before a mirror.

How Would the U.S. Media React?

An American news anchor sits at a desk before a film camera. There she reads, stoically and dutifully, the latest communique issuing from the Centers for Disease Control and Prevention or the Food and Drug Administration.

Thus we are informed that novel mRNA vaccines are the only shield against the dreaded COVID-19. They are at once “safe” and “effective.”

We are further informed that federal vaccine mandates are appropriate — and perhaps even lawful.

At that point an unauthorized person invades the television screen and disrupts the proceedings. She is armed with a placard. It bears this inscription:

“My Body, My Choice. End the Tyrannical Mandates!”

This scalawag, an employee of this “news” network, pre-recorded a statement of explanation:

One person, Anthony Fauci, solely bears responsibility for thousands of deaths by suppressing the early use of effective treatments like ivermectin in order to push these experimental genetic therapies upon the American people. I am ashamed that I allowed lies to be broadcast from TV screens. Ashamed that I allowed others to zombify American people.

Now answer these questions, please: Would her brethren and sistren in the media empty hosannas upon her head?

Would they hold this Joan of Arc out as a First Amendment crusader and sob about her bravery, her courage to confront Big Pharma and its propagandists?

Or would they denounce her as a sort of bedlamite… as a believer of conspiracy theories… for propagating “misinformation” and “disinformation”… perhaps even for disseminating “Russian lies”?

We believe we have the answers. That is merely because we have observed their conduct for nearly two years. We know them snout to stem.

Might certain members of the guardian media even yell for her jailing? We would not be one whit surprised if they did.

“You can’t compare the two situations,” you counter, continuing that:

“Putin is a brutal dictator who has unjustifiably invaded his neighbor, killing many thousands of innocent people. That woman is a hero for doing what she did. You can’t compare Dr. Fauci to Putin. He’s trying to save lives, not take them.”

You are not yet through:

“That protester you cite in your theoretical example is a nutjob. She’s spouting unsubstantiated claims, yes, fake news, that could actually kill people if they listened to her. She’s just an anti-vaxxer who shouldn’t have a public forum at all.”

How Do You Know Which Experts to Trust?

Are you not aware that multiple studies indicate these vaccines are poisons for many? They exist.

Are you also not aware that multiple studies indicate such therapeutics as ivermectin are formidable and effective treatments? These studies likewise exist.

You say you are not aware of them because they lack credibility. If they glowed with credibility, the media would have reported it.

Yet how do the media determine the credible from the incredible? Where are their doctorate degrees in the medical sciences?

The news people appeal instead to authority — to the authority of Dr. Fauci and his understrappers within the public health bureaucracies.

After all, they are official agents of the United States government. They are not “quacks.”

Journalism Is About Covering Important Stories

Yet — yet — the same Dr. Fauci and his understrappers within the public health bureaucracies have repeatedly dispensed false “information.”

In fact, the authorized experts have often been proven 100% wrong, falsified and discredited.

And yet the American media kneel before them even now. All dissenting information is throttled, muffled and gagged.

As one wag once observed: Journalism is about covering important stories — with a pillow.

We believe there is hard truth in it. We also hazard that journalists are covering important stories on Ukraine with a suffocating pillow.

Here we speculate, though our spies report scandalous rumors.

And let the record reflect: We do not stand Dr. Fauci beside Mr. Putin for comparison.

The latter is vastly more practiced in the murderous arts and sciences. The former is merely a scoundrel.

The Limits of Free Speech

Our sights today are instead trained upon the United States media.

We aspire merely to force arrogant people to their assumptions… and to turn their critical eyes upon themselves.

Again, to stand them before a mirror.

Our media like to croon about “free speech” and “the freedom of expression.”

Yet their allegiance to these lovely ideals is conditional.

We are with the incomparable Mencken:

“I have believed all my life in free thought and free speech — up to and including the utmost limits of the endurable.”

“I have believed since the pandemic in free thought and free speech — up to and including the utleast limits of the permissible.”