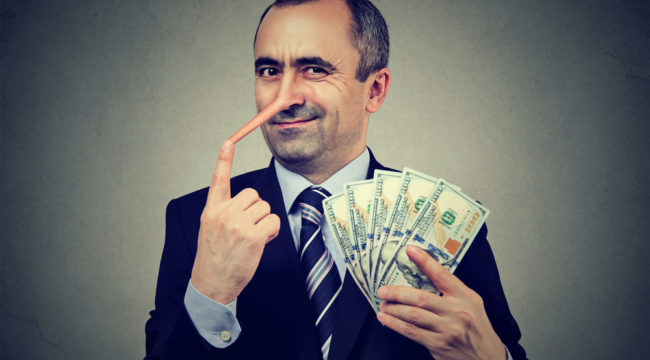 We merely rolled our eyes.

The day’s events only reminded us of the fraud, the delusion, the humbug of it all…

Why should anyone believe a Washington bureaucrat is wise enough to arrange the economic affairs of 300 million Americans?

Or that a tax plan expected to add $1.5 trillion to the $20 trillion debt is a net gain for the economy?

Or that stocks today take the economic temperature accurately?

We take some solace in that we’re only expected to believe three.

It doesn’t seem the bond market believes any…

For example, the tax plan is supposed to revive the animal spirits… kindle growth… goose inflation.

Under these conditions, long-term bond yields should rise in sympathy.

How did yields on the 10-year Treasury react to yesterday’s show?

A strange show of confidence in the Federal Reserve’s chairman-in-waiting… the tax plan… or future growth.

Ah, but the Dow seemed to expressed confidence in all three.

The Big Board ended yesterday at another record high, rising on faith in the new chairman (who won’t rock boats), tax cuts and higher growth ahead.

The Dow is up again today.

So are the S&P and Nasdaq.

But let us now enlarge today’s themes of fraud, delusion and humbug…

Most agree that the Federal Reserve’s wizardry has levitated markets since the financial crisis.

But by how much?

Since QE was first introduced, the S&P 500 has gained 1,546 points. All but 355 points were achieved during periods of QE. Of those remaining 355 points, over 80% occurred after Trump’s victory.

There, your smoking gun.

But the Fed announced it would begin draining its massive $4.5 trillion balance sheet last month.

Many feared markets would throw a “taper tantrum” in response… as they did in 2013 when the Fed threatened to withdraw accommodation.

Could it be that stocks can stand on their own legs without the Fed? Is this bull market truly sui generis?

Our agents inform us that not only did the Federal Reserve not reduce its balance sheet last month… it expanded it at least $13.5 billion.

We invite you to read that again.

Now, our sources do not have data for the full month — only for the first three weeks.

It seems the Fed may have pulled wool over the market’s eyes.

Perhaps they’re less willing to withdraw support than they admit.

Maybe they know something they’re not letting on.

A looming recession? A failing gasket somewhere in the economic machinery?

We speculate, of course.

Perhaps the Fed has since begun its reductions — again, our agents haven’t reported the latest data.

And maybe the Fed will reduce its balance sheet $10 billion in November and proceed apace.

But if the Fed carries through with its pledge, we’ll soon find out if stocks can make it on their own…

And how much is fraud, delusion and humbug…