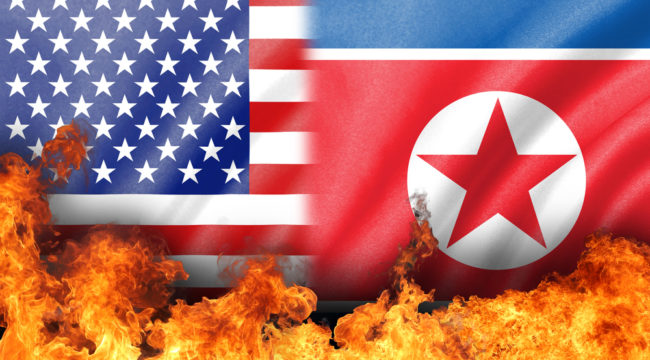 The Fragility of the North Korean Nuclear Showdown

Right now, there’s no doubt that the greatest threat to world peace in general, and the U.S., in particular is coming from the Democratic People’s Republic of Korea, DPRK, commonly referred to as “North Korea.”

North Korea has made great strides in short-range and intermediate-range missiles, and is working rapidly toward an intercontinental ballistic missile (ICBM), that could reach Los Angeles and much of the rest of the United States from their territory.

North Korea has a store of plutonium and highly-enriched uranium (HEU) that can be converted into nuclear weapons. It has also made progress in the miniaturization and ruggedization of those weapons so they can be converted to warheads and placed on the missiles.

North Korea detonated a nuclear weapon earlier this month on Sunday, Sept. 3. This was the sixth time they had done so, but the first time since their ICBM missile tests and the first time under President Trump’s administration.

This test was different in another important way. It is estimated to be a hydrogen bomb instead of an atomic bomb. The difference is significant.

Both types of nuclear weapons work by releasing neutrons in critical-state radioactive material, either highly enriched uranium or plutonium. The difference is that the atomic bomb works by fission, literally “splitting” an atom, so that a neutron is emitted, collides with other atoms and causes a chain reaction with an enormous release of energy.

This gives North Korea many more options in their attack scenarios.

They can put more destructive force in a smaller space, thereby achieving the warhead miniaturization needed to fit on an ICBM.

They do not have to worry as much about accuracy. An atomic weapon has to hit the target to destroy it. A hydrogen bomb just has to come close. This means that North Korea can pose an existential threat to U.S. cities even if its missile guidance systems are not quite perfected.

Finally, a hydrogen bomb gives North Korea the ability to unleash an electromagnetic pulse (EMP). In this scenario, the hydrogen bomb does not even strike the Earth; it is detonated near the edge of space. The resulting electromagnetic wave from the release of energy could knock out the entire U.S. power grid. Good luck with your bitcoins in that scenario.

This is one of the reasons I recommend gold. It is not dependent at all on the power grid.

When these technologies are perfected and merged, North Korea will be able to kill one million residents of Los Angeles with the push of a button or  take down the U.S. power grid. This nightmare reality is probably just three years away.

And North Korea has threatened to test a hydrogen bomb in the Pacific Ocean in response to new U.S. sanctions. That could have serious environmental consequences, in addition to the geopolitical consequences. In 1963, the U.S. and the Soviet Union agreed to stop testing nuclear weapons in the atmosphere, underwater, or in space. A North Korean H-bomb test would be a major event.

On that score, North Korea has left no doubt. Not long ago the North Korean government released a propaganda film that displayed missile attacks on U.S. bases and military targets. The film also displayed the North Korean leader, Kim Jong-un, celebrating successful missile tests with his military leadership.

And just a few days ago North Korea released another propaganda film showing its missiles taking out U.S. planes and an aircraft carrier. Kim Jong-un has also threatened to reduce the United States “to ashes” with nuclear attacks.

The U.S. has taken none of this lying down. Diplomatic efforts to contain North Korean ambitions over the course of the Clinton, Bush 43, and Obama administrations have failed, and the time for diplomacy is past.

Leading officials have made it clear that the U.S. would engage in pre-emptive warfare with North Korea to stop their nuclear program if necessary. Secretary of State Tillerson also refused to rule out supplying nuclear weapons to U.S. allies including Japan and South Korea in order to deter North Korea on a regional basis.

And Trump’s recent comments about North Korea at the U.N. did little to bring U.S. resolve into question. Calling Kim Jong-un “Rocket Man” certainly didn’t ratchet down the rhetoric.

Zhang Liangui, a professor of international strategic research at a major Chinese university, recently expressed his belief that the risk of a U.S. war with North Korea over its nuclear program has significantly increased:

“[North Korea] has already touched the red line of the U.S. and it seems that the U.S. does not have other choices. The possibility of military action is increasing.”

These threats are existential from a U.S. perspective. Deterrence does not work when the opponent has so little to lose. Kim Jong Un tortures and starves his own people on a good day. At times the North Korean people have been reduced to eating bark from trees.

Why should Kim Jong Un be deterred by U.S. threats to attack if he and his ruling elite are secure in their bomb-proof bunkers?

It’s almost certainly too late for negotiation or diplomacy. That conclusion is based on what is called “breakout” behavior.

It’s one thing to develop these weapons in baby steps and back off when the major powers confront you. Then you negotiate some concessions, wait a few years and break your promises. Wash, rinse and repeat.

That’s what Iran has been doing for 20 years.

Breakout is different. It’s more like football when you’re in the red zone and decide to throw a pass into the end zone. You just go for it.

Kim will not be deterred now. He believes the U.S. is bluffing. He believes he’s safer with nuclear weapons than without them. He’s going for it.

The U.S. only has two choices now. The first is to do nothing and learn to live with nuclear blackmail from North Korea. The second is to attack, probably in the next three–six months, to destroy the Kim regime and its weapons programs.

You don’t even need to ask what will happen to gold prices in that scenario. They’ll skyrocket and then much higher from there as the repercussions begin.

The time to acquire physical gold and gold mining stocks if you don’t already have them is now.