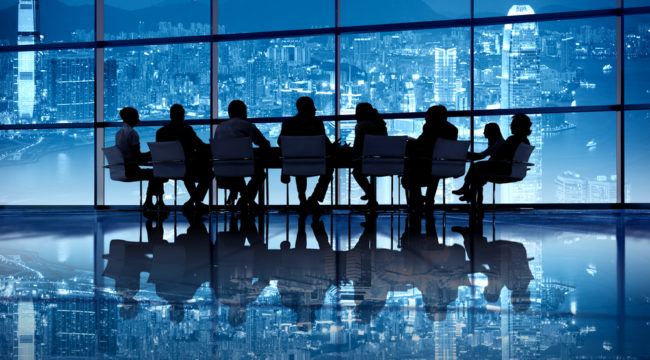 A Force Greater Than the Fed

Today the Fed announced it’s ready to reduce its balance sheet to normal.

Neither is good for stocks.

So how did they take the news?

Exactly as you’d expect — with another record setting day.

The S&P scratched out another record of its own.

Only the Nasdaq ended the day in red. And only by five points.

Why are stocks setting records in the face of such uncertainty?

The news is noise, say the optimists…

“Stocks are making record highs because the U.S. economy is on a roll,” says Yahoo Finance.

It’s because exports are rising… corporate earnings are soaring… and sales are booming, adds one analyst at Contrarian Outlook.

Stocks set records “not because central bank balance sheets are so expansive, but because companies are still lean and profitable, and corporate shares still represent value compared to other assets,” chirps the editor of Momentum Strategies Report.

We bring a disbelieving outlook to the business… and a jaundiced eye.

It may blind us to the booming sales, the corporations representing value, the rising exports… the economy on a roll.

It projects third-quarter growth at an annualized rate of 2.2%… down from a projected 4% at quarter’s start.

The New York Fed releases its own updated estimate Friday. Its last estimate had third-quarter GDP even lower… at 1.3%.

Are these the numbers of an economy “on a roll”… or an economy at a crawl?

If the latter, what force is thrusting stocks to record heights?

Still low. But higher than zero. And trending higher.

Yet… the Goldman Sachs U.S. Financial Conditions Index is now at its lowest point since 2014.

So despite the Fed’s tightening and all of hell’s angels, money is looser and cheaper than at any point in three years. 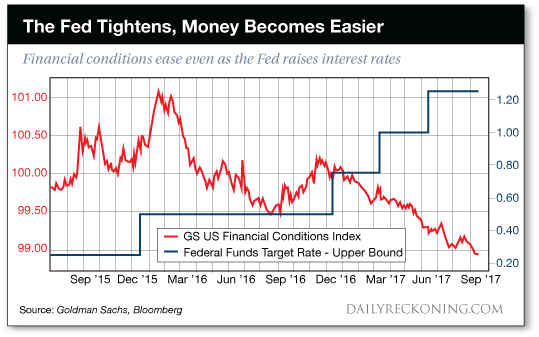 How can this be?

Bank of America’s Michael Hartnett may have the answer…

The Fed is not the world’s sole central bank.

It shares the road with the European Central Bank (ECB), the Bank of Japan (BOJ), the Bank of England (BOE), the People’s Bank of China (PBOC) — to name some.

And Hartnett notes that central banks have purchased nearly $2 trillion of financial assets year to date.

That nears the amount of assets the Fed purchased under QE1… during the breathless and foot-free days of the Great Recession.

Hartnett calls it the “supernova of liquidity”… the “flow that conquers all.”

By our lights, it better explains today’s record markets than rising exports… booming sales… or the “rolling” economy.

We are not alone.

Stocks have continued to rise, hitting new all-time highs in both the U.S. and globally, oblivious of any news and fundamental developments — as one would expect from a massive asset price bubble, and in line with what Hartnett has dubbed a liquidity supernova.

Some months back, MarketWatch even scoffed:

Quantitative tightening? Oh, please. Central banks, courtesy of the eurozone and Japan, are still buying financial assets with both hands.

But what about the future?

The BOE completed its own QE program this spring. The ECB has indicated it will begin to taper its asset purchases this autumn. The BOJ has backed off its own in recent months.

As we first reported this summer, the “flow that conquers all” will eventually stop rising… level off… and finally recede.

By the third quarter of next year — under a year from today.

And stocks may wash away with the ebbing tide.

He believes the “most dangerous moments for markets” actually occur within the next two months, when markets suddenly grasp the reality of falling liquidity.

Hartnett expects the S&P to rise an additional 100 or more points, to 2,630, before the tide recedes later this fall. 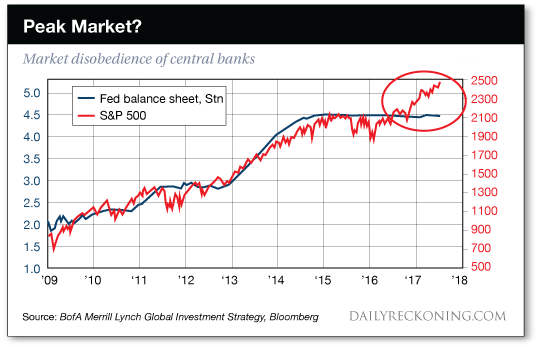 We make no prediction of course.

But it was Warren Buffett who said, “You only learn who has been swimming naked when the tide goes out.”