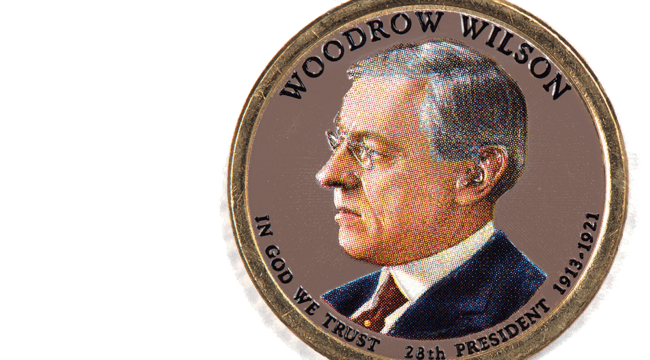 Yet we have long suspected the opposite…

How many traitors occupy the District of Columbia?

How many fools occupy the District of Columbia?

Being a fool is no crime of course. We would presently languish behind the bars if it were, serving a long, long sentence.

A great portion of the population would be with us. But our legal status renders fools no less dangerous.

A fool with a bad idea in his head is a menace. He is the equal of a baby with a loaded gun in his hand…

Was Woodrow Wilson a traitor for meddling in a European civil war 104 years ago?

He may have meant the best in the world. He may have wished to make the world safe for democracy — and by extension safe for America.

(He certainly made the world safe for the large American banks that loaned to the allied powers).

But was Wilson a fool for hurling the nation into a European civil war? Almost certainly.

They would have likely exhausted themselves, come to terms… and limped home, honors even.

It made the world safe for fascism… and communism.

And WWI was “The Great War” until an even greater war raged 20 years later.

Here our former colleague David Stockman hauls Wilson into the dock — and indicts him for every crime on the calendar:

The world was — as it always is — to its neck with fools. And these fools would have certainly gotten themselves up to mischief somehow or other.

Yet we believe the hottest hells of the 20th century would have been averted had Mr. Wilson sat upon his hands in April 1917.

But again: It was not treason that sent Mr. Wilson buccaneering into Europe’s war.

Never fight a ground war in Asia, warned Douglas MacArthur. Here was the sage counsel of a fellow who had fought two.

But old Gen. MacArthur — no pacifist — toppled the domino theory. “Ridiculous,” he labeled it.

Scroll the calendar back to April 1961…

MacArthur instead advised the youthful president to battle communism with America’s mightiest weapon — its economy.

He believed a free economy would knock the devil out of a communist economy.

Would he have taken aboard the advice… brought home the advisers he had dispatched to Vietnam… and quit the country altogether?

The fool idea won the day — and America lost its way.

A half-century later, another fool idea infested the White House. This fool idea was wedged within the dense cranium of President George Walker Bush.

It would make the Islamic world safe for democracy. The democratic dominoes would then proceed to fall, knocking down the region’s dictatorships and autocracies.

The Taliban and Saddam Hussein would go out. Thomas Jefferson and James Madison would come in.

Afghanistan would become a Kansas in the Hindu Kush, Iraq a Utah on the Euphrates.

But what happens when you combine one fool idea with another fool idea? Could there be any doubt?

So Much for Democracy

Saddam Hussein is out, it is true. And our ethereal sources inform us he is suffering lamentably in his present location… even if he finds the company agreeable.

And in Afghanistan, the Taliban is presently installing its own democracy. Its Constitution is the Koran, and its justice system is Sharia Law — which includes:

Severe punishments such as execution, stoning, cutting off limbs or whipping. These include offences such as zina (unlawful sexual intercourse such as fornication), unfounded accusations of zina, drinking alcohol, highway robbery and some forms of theft.

Here is mercy itself. Only “some forms of theft” are punishable by execution, stoning, cutting off limbs or whipping.

We would vastly expand the roster of offenses punishable by the methods listed.

For example: The sale or ingestion of hydroxychloroquine, Ivermectin, Vitamin D and other poisonous substances falsely claimed to treat COVID-19.

For example: Denying that the mRNA vaccines are 100% safe and effective.

For example: Refusing to sport a facial mask when alone out of doors.

Each would be punishable by execution, stoning, cutting off limbs or whipping. Perhaps worse.

But let it go for now. Let us return to the main road…

Yet he was a fool to believe he could transform these alien cultures. A fool?

We wonder what fool idea will next prevail.

They are a menace to American happiness.

Let us be glad of it. We hazard the United States of America will require God’s special providence in the times to come…