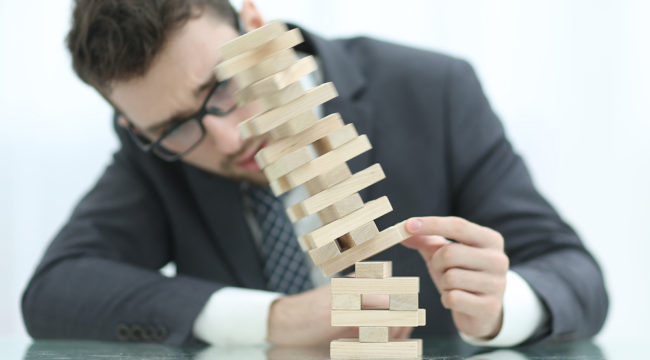 All the “fixes” have fatally weakened the real economy, and created a dangerous illusion of “wealth,” “growth” and solvency.

The “fix” of the last eight years worked, right? This was the status quo’s “fix”:

2. Monetary stimulus, i.e. creating and distributing money at the top of the wealth/power pyramid so corporations and the super-wealthy could buy more assets with free money for financiers issued by central banks.

3. Gaming statistics such as unemployment and metrics such as stock indices to generate the illusion of “growth,” “stability” and “wealth.”

4. Saying all the right things: the “recovery” is creating millions of jobs, inflation is low, virtue-signaling is more important than actual increases in inflation-adjusted wages, etc.

This “fix” has fatally weakened the real economy.

The cost of maintaining the illusions of “growth,” “stability,” “wealth” and solvency is extremely high, and hidden from view: systemic fragility has increased to the point of brittleness.

Fragility is the result of an erosion of resilience, redundancy, adaptability, accountability, honesty, feedback and willingness to sacrifice today’s consumption for tomorrow’s productivity and systemic stability.

Can anyone who isn’t a lackey on the payroll of the Powers That Be provide any credible evidence that the U.S. economy is more resilient after eight years of debt-dependent “recovery”?

For the past several years, central banks have funneled credit and liquidity into the banks at the top of the wealth-power pyramid. Very little of this new “wealth” has trickled down to the bottom 90% of households in the real economy who have seen their earnings stagnate and their costs rise.

Now that debt and essentials are absorbing much of the bottom 90%’s earnings, there’s little fuel left for additional debt-based consumption. This is why we see auto sales plummeting, for example.

You see the conundrum facing central banks. All the new money did was inflate asset bubbles in assets owned largely by the wealthy.

Bottom line: the next recession won’t be “fixed” with the central bank playbook of more free money for financiers.

The entire status quo is based on the delusion that rapidly rising debt will never generate any negative consequences.

America’s national debt, extended a mere dozen years into the future, is expected to double from the current $20 trillion to $40 trillion. And that assumes 1) trillions of dollars in private and local government pensions don’t implode and have to be bailed out by the federal government, a bail-out that will have to be paid by borrowing more money, 2) a recession doesn’t slash federal tax revenues.

Color me skeptical that doubling the debt in 12 years won’t have any negative consequences. But that federal debt is only the tip of America’s total debt load, which is rising fast in all sectors: federal, state/county/city, corporate and household.

With earnings stagnate for years/decades, households have run out of rope to fund new purchases. Once the bottom 95% can no longer afford to borrow and spend more, the economy sinks into a self-reinforcing recession.

Creating more free money for financiers as central banks have done for years won’t solve this recession. Instead, it will anger the bottom 95% to see the wealthy’s assets climbing ever higher. That anger translates into political discord.

Sadly, we suffer from an oversupply of well-paid lackeys, factotums, apparatchiks, flunkies, media mouth-pieces and PR hacks and a severe scarcity of unbiased, unspun data points. What little data we do have tells us that the inflation-adjusted wages for the bottom 95% have declined during the “recovery” that made the wealthy much, much wealthier.

As for redundancy — redundancy reduces profits, as it increases costs, so redundancies have been as ruthlessly eliminated as human labor. The slightest disruption in global supply chains means production and transport of essentials collapses in a heap.

And how have the dominant state-protected cartels improved adaptability?

They’ve stifled it at every turn. Higher education has jacked up prices for its overpriced marginal-utility “product.” Ditto the healthcare/Big Pharma cartels, the military-industrial cartel (hello overpriced, under-performing F-35). Add the banking cartel (love those $35 fees and .01% interest paid on deposits), and all the other cartels that dominate our pay-to-play “democracy.”

State-protected cartels and monopolies are the death of competition, transparency and adaptability — all essential dynamics in real solutions.

Accountability in the public/private-sector “swamp” is near-zero. A mumbled apology for malfeasance, a hand-slap fine for fraud, a bribe passed off as a “speech fee,” revolving doors between government contractors and government agencies.

Accountability is non-existent at the top of the wealth-power pyramid, while a nickel-bag dealer gets a tenner (10-year gulag sentence) and the federal prosecutor gets a gold star.

Meanwhile, the real criminals skim millions in ill-gotten embezzlements, frauds and cronyist skims are laughing all the way to their remote havens of wealth.

“Honesty” has lost all meaning in public dialog. Supposedly accurate statistics are rigged, and every public utterance is calculated to signal virtue (the acme of Orwellian doublespeak) or appeal to a constituency attuned to key words: utter the key words, and you’re home free.

Never mind the economy has been hollowed out: you’ve signaled your virtue and the moral superiority of the constituency.

Feedback has been reduced to a dollar sign. If you pony up millions in campaign contributions and lobbying, your feedback counts. All other feedback is discounted or ignored. Whistleblowers are prosecuted, any reform that threatens the status quo is watered down to meaninglessness, and anyone going public with truthiness is sent to bureaucratic Siberia.

As I explain in my book Why Our Status Quo Failed and Is Beyond Reform, all these fake-reforms only increase the systemic fragility by weakening all the dynamics that generate adaptability, accountability, feedback, transparency, etc.

The status quo is now like a wafer-thin sheet of ice over a deep lake of killing-cold water. To the naive and inexperienced, the ice looks solid; they believe the tall tales of “recovery,” growth,” “wealth” and solvency.

It’s all phony public relations. As a strange as it may sound, PR doesn’t make thin ice thick enough to stand on.

All the “fixes” have fatally weakened the real economy, and created a dangerous illusion of “wealth,” “growth” and solvency.