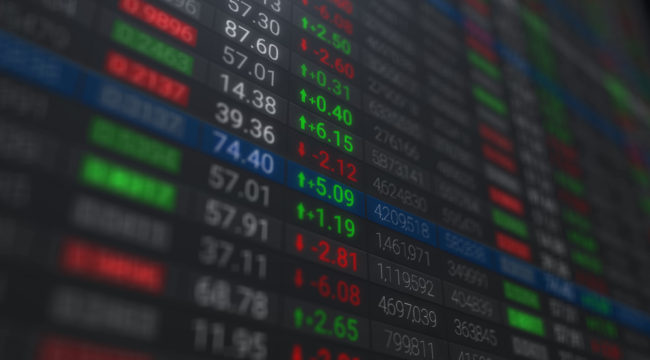 It’s time to welcome in a brand new trading season. As a 25-year trading floor veteran I know what that means…

Everyone, and I mean EVERYONE always wants to know what I’m hearing on the floor. People want to know the must-have stocks for 2018…and the must-follow sectors.

So I’ll cut to the chase and spill the beans right here. Consider this your 2018 “insiders” trade briefing…

If we haven’t met before, allow me to introduce myself.

My name is Alan Knuckman. Like I said, I’ve spent the last 25 years on the trading floor. Starting in 1991, I worked my way up the ranks from being a runner, phone clerk and broker…

All the way up to becoming a professional trader and a member of the Chicago Board of Trade.

Today, some folks at home might even recognize me from one of my appearances on Bloomberg, CNBC, CNN or Fox News.

But more importantly, 2017 was a fantastic year for traders. For instance, one of the premium research services I publish, The 42 Day Retirement Plan, went an astounding 11 for 11 on closed trades in 2017.

Those are serious results, if I do say so myself. And you know what’s really crazy? I think 2018 could be even hotter…

So let me to share a few of my 2018 predictions with you today. Let’s get to it…

That’s right, I expect the second longest bull market in history to continue into this new year. I know you’re constantly hearing talk of a bubble, but I think much of that fear is mislaid.

With earnings season on the horizon, it won’t be long before the Dow trades through that level. In fact, the last two earnings seasons have produced historically high numbers and I expect the figures announced this month to be even higher due to the projections that include the new tax law.

So don’t take yourself out of the game now, this bull market has still got legs.

Because the Dow is a price weighted index, look for high priced (but low valued) stocks to get us to that $30,000 mark. One that I have my eye on right now is Goldman Sachs (GS).

Remember, any bearish market predictions have been squashed since 2009. And here in 2018 there’s no reason to “go out on a limb” and call a top. The trend is moving higher…keep on profiting while it does!

Along with many other major deals.

This is an extremely healthy sign for the market. It tells us that companies do not believe there is an upcoming market correction. Otherwise, they would wait to acquire these companies at a cheaper price in the future.

And with the Republican tax plan now allowing corporations to repatriate trillions of dollars in overseas cash, expect much of it to be used for mergers and acquisitions.

WTI crude oil just passed $60 per barrel for the first time since 2015 and I believe this is just the beginning.

As my paid-up readers know well, once the $45 to $55 trading range was broken on the high side, $65 became the new trading target — and I expect that mark to be reached in the near-term.

The U.S. Dollar Index was down 8.5% last year due to rising political uncertainties, interest rates remaining low and a strengthening European economy.

And this is a trend that I expect to continue into 2018. That’s because the initial fall in the Euro currency was greatly exaggerated in the first place which has sparked its 2017 upturn.

Right now, the Euro/USD spot price is around $1.20 but I’ve got a breakout target set at $1.25 — meaning the dollar should continue to fall.

But this is not a bad thing!

A lower dollar will serve as both a catalyst for the energy and mining sectors while also propelling earnings of U.S. corporations that sell goods and services overseas (this is because overseas profits will be exchanged back into more U.S. dollars).

Trump’s historic tax cuts will boost most American corporate earnings lines by at least 20% in 2018 — sending stocks soaring still from their current levels. And that’s just the beginning.

I’m talking about the President’s plan to pour more than a trillion dollars into fixing the country’s crumbling infrastructure.

Like everything else in Washington, it won’t come easy. But if the White House can score a win on infrastructure, the market’s gains will come fast and furious.

One infrastructure play that I recommended to my readers is Freeport-McMoRan Inc. (FCX)… and since we bought we’re up over 15%…

Copper… steel… basic materials… they could all boom in early 2018.

As I’ve hinted, my research advisories had FANTASTIC performance in 2017. It was a banner year for us…the economy… stocks… and America.

And as you can tell from the predictions above, I think there’s still massive room for more sectors and stocks to rally.

So I’ll add a shameless plug…

Right now we’re on the precipice of what could be the biggest market opportunity in a generation. And a brand new round of money-making market spikes are set to start…

I call these short (but potentially profitable) timeframes “retirement windows”…

Simply put, you could make enough in a few weeks to help boost your retirement to the next level.

For the full story on this HUGE opportunity, click here right now.

How many times over the past several years have you heard that stocks are massively overpriced by historical standards, that they just couldn’t go any higher?

People have been talking about the top in the market since 2009. And it’s essentially gone straight up.

Think of how much opportunity you would you have missed out on if you followed this doomsday narrative for the past several years.

Look, I can’t disagree that stocks are extremely expensive by certain metrics. But they’ve been overpriced by those same metrics for a long time now. And stocks continue to climb, whether you think they should or not.

There’s no fundamental reason why stocks won’t continue to climb. Remember, markets can always go a lot higher than you think.

This market is offering incredible opportunities right now, and I fully encourage you to take advantage while it lasts.

Here’s to a profitable 2018 trading season,