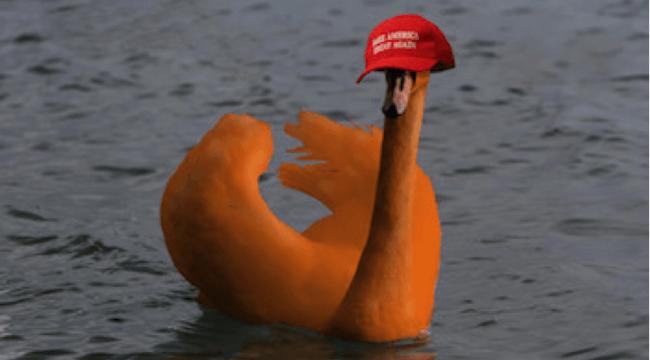 [Ed. Note: To see exactly what this former Reagan insider has to say about Trump and specifically what he believes must be done, David Stockman is sending out a copy of his book Trumped! A Nation on the Brink of Ruin… And How to Bring It Back out to any American willing to listen. To learn how to get your free copy CLICK HERE.]

The Deep State’s coup against Donald Trump is palpable. So count it as another element of reality to which Wall Street and its raging robo-machines and day traders are blind as bats.

After all, they are essentially “pricing-in” the most successful presidency in modern times on the economic front. The Trump Stimulus was even supposed to be “in like Flynn” in time to boost corporate earnings materially in 2017.

But it has already transpired that the Flynn in question was named Mike, not Errol; and the conquest was not that of a swashbuckling outsider who quickly had his way with the Imperial City, but the doings of resident swamp creatures bent on turning back the Donald’s unwelcome challenge.

So in a matter of weeks or months at most, Trump will be struggling to survive, while the giant fiscal stimulus that has Wall Street all bulled-up will amount to a heap of ruins scattered about a debilitating political war zone on Capitol Hill.

I never thought the vaunted Trump tax cut and infrastructure boom would see the light of day in their own right, of course, because the Donald is caught in an inherited debt trap that he does not yet even dimly appreciate. Yet with each passing day, the magnitude of the trap materially enlarges.

As of the Daily Treasury Statement for February 17, for example, the public debt was $19.895 trillion compared to $18.99 trillion on the same date a year ago. When you factor in a slight gain in the Treasury’s cash balance to $262 billion, the math speaks for itself.

During the past year Uncle Sam’s “cash burn rate” was nearly $75 billion per month. That means Washington actually consumed $885 billion of cash during the last 365 days — or far more than implied by the official budget deficit of $587 billion for the fiscal year just ended (FY 2016).

It also means that once the tax collection season ends in April, it will be Katie-bar-the-door time on the debt ceiling front. When the latter becomes frozen into place on March 15 after the insidious Boehner-Obama debt ceiling “holiday” expires, there will not be enough cash to last the summer — even if the Treasury resorts to the usual gimmicks, such as temporarily divesting the trust funds.

So let this part be crystal clear.

What is coming down the track is the mother of all debt ceiling showdowns and the virtual certainty of government shutdowns and deferred payments to states, contractors and even some transfer payment beneficiaries.

The boys and girls on Wall Street are so unprepared for this outbreak of fiscal mayhem that they will think that Halloween has come before Labor Day.

I will provide more evidence below for that disastrous scenario. But even before the great debt ceiling crisis of 2017, there will also be a crash landing of the Obamacare repeal and replace effort for the simple reason that the GOP cannot agree on a new version of what will amount to Obamacare Lite and how to pay for it.

To take one simple example, the Obamacare taxes would generate $800 billion of revenue over the next decade while the Obamacare Medicaid expansion would cost more than $1 trillion.

However, there is no chance whatsoever that the K-Street lobbies will permit any of these taxes to stand in a repeal bill, while GOP-controlled statehouses across the nation will resist mightily going cold turkey on their Washington Medicaid money.

Nevertheless, the Trump White House and Congressional GOP are so politically exposed on Obamacare repeal that they have no choice except to soldier on with a process that will create deep fissures within the GOP ranks and which will also burn up the legislative clock.

Recall that there is not a snowball’s chance in the hot place of the GOP’s fragile 52-48 Senate majority prevailing on Obamacare outside of the filibuster-proof reconciliation instructions under the FY 2017 budget resolution.

But that’s also a Catch-22. Under the rules, Congress cannot pass a FY 2018 budget resolution to shield the tax cut from a 60-vote filibuster without avoiding the prior year reconciliation instructions on Obamacare.

Accordingly, I do not expect either a FY 2018 budget resolution or tax cut/reform instruction before the debt ceiling crisis hits next summer. The GOP simply can’t jettison its Obamacare repeal and replace promise before then — even if that extended delay gives the organized Left an ample opportunity to mount nationwide attacks on GOP legislators like those already emerging during the President’s Day recess.

Throw on top of that the intensifying political collision on the border control/refugee/immigrant vetting issues and the newly launched DHS campaign to deport millions of illegals and you have further jarring distractions from the Trump economic agenda.

Nor is the Russian meddling canard going away, either. In fact, the real purpose of the multiplying Capitol Hill investigations of the alleged nefarious interaction between the Russians and Trump operatives during both the pre- and post-election periods is quite transparent.

These investigations are nothing more than thinly disguised attacks on the legitimacy of the nation’s 45th President by the GOP’s War Party contingent led by Senators McCain and Graham.

The one thing we learned during two decades in Washington is that re-litigating an election — which is the essence of the Deep State counter-attack now underway — is toxic to any semblance of ordinary governance, as it proved to be during Watergate.

But if you overlay on that the white hot political confrontations now erupting over issues that truly do divide the American public — such as government arranged health care and immigration — you have guaranteed paralysis and a fractious breakdown in the Imperial City.

In that environment you also do not get a sweeping tax cut through the Congress, nor is it conceivable that you get bipartisan cooperation raising the national debt ceiling by trillions — as will be required before Labor Day just to pay for the built-in policies Trump inherited from 30 years of fiscal profligacy.

Indeed, just consider the implications of HR McMaster’s arrival this week as head of the national security council. In a word, the Donald has now completely surrounded himself with generals and hawks. So doing, he has buried himself even deeper in a hopeless fiscal trap because within months his war cabinet will be peddling a plan to bust the sequester caps wide open and add upwards of $1 trillion to defense spending over the next decade.

In short, when the debt ceiling freezes in at $20 trillion and Washington runs out of cash by summer’s end with no prospect of a giant tax cut or infrastructure stimulus in sight, all hell will break loose.