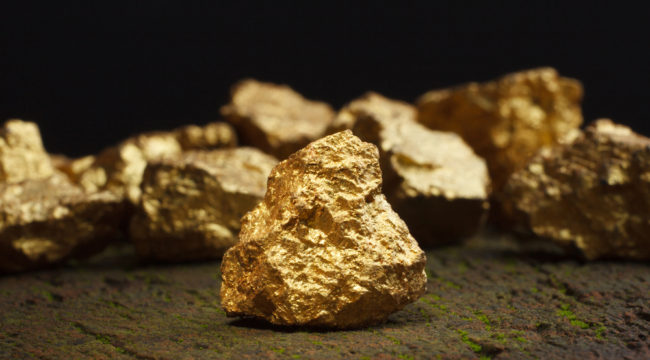 Finding Gold in a World of Increasing Scarcity

Our mission at Rickards’Gold Speculator is to identify precious metal plays with significant share price upside. The upside could come from either normal appreciation over time, or due to quick pops via takeover.

An example of a quick pop via takeover is Kaminak Gold. In May, our subscribers enjoyed a 37% gain in less than a week. We recommended Kaminak Gold in our Gold Speculator kickoff portfolio on May 9. A few days later, we learned of a $520 million deal (Canadian dollars) for mining giant Goldcorp to take over Kaminak. Kaminak shares rose sharply in price, and we recommended selling into strength.

In order for us to find the best possible takeover targets, it’s beneficial to learn exactly what large mining companies like Goldcorp want to see in a takeover play. Wouldn’t it be great if they would just tell us?

Well, they did. Last week, I visited the Kaminak Gold property in Yukon territory. It’s a project called Coffee. I spent much of one day on-site with Kaminak and Goldcorp reps. They were all open and straightforward. They patiently answered questions, and I’ll share their perspective with you in just a moment. But first, here’s the key takeaway:

Goldcorp management believes that future gold production will be constrained, for a variety of reasons. The Goldcorp people call it the “Peak Gold” approach to running a mining play. Allow me to explain…

Across the world, gold discovery peaked in the 1990s. It’s basic logic that you can’t produce what you have not discovered. As gold discoveries decline, so will production over time. Add the fact that Goldcorp management calculates that gold production peaked in 2015 and trends are all downhill from here. Let me illustrate with this data shot. It’s from a recent Goldcorp presentation. 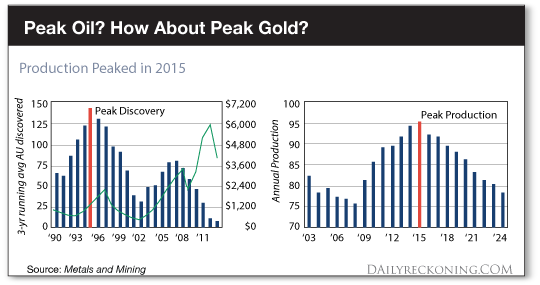 According to Goldcorp’s slide, there are “significant supply constraints ahead.” If Goldcorp wants to remain a major producer, it must grow reserves and invest in new production.

Meanwhile, according to one Goldcorp rep last week, “It takes about 20 years to move a project from discovery to initial production. We have to get ahead of that curve.”

Goldcorp’s preferred method to stay in the gold game is through what the company calls “brownfield” exploration and expansion. This means that Goldcorp focuses future growth in existing mine districts that host established discoveries and/or developments and production.

Along the way, Goldcorp will seek partnerships with junior companies that are active in these kinds of areas to cultivate a future production pipeline. Right away, one can understand why Goldcorp was interested in Kaminak. The Coffee project is well along in terms of identifying a serious resource and obtaining permits to build. Plus, it’s right in the heart of the storied Yukon, with a mining history of over a century.

Coffee sits atop a significant and underexplored — mineralized belt that extends from central Alaska through Yukon territory. Coffee acreage abuts the Yukon River, which more or less follows the line of a deep-seated rip through the earth’s crust, called the Denali Fault — a San Andreas-sized feature.

There’s significant other faulting in the Coffee area as well, beyond what one sees with the Denali Fault. These other faults appear to be the source of most mineralization. All in all, Coffee is a geologically superb, very large mineralized zone.

Kaminak initially discovered gold at Coffee in 2010. Since then, Kaminak drilled hundreds of holes to identify 16 other distinct gold discoveries, and established a probable reserve of 2.1 million ounces of gold. It’s reasonable to believe that there’s likely much resource yet to be identified. Still, in terms of finding and proving-up a resource, Kaminak accomplished what it set out to do.

Looking ahead, Kaminak – with Goldcorp now in control — has more work to do to complete mine permitting; thus the work effort isn’t entirely complete. Right now, the forecast is that mine construction cannot begin before 2018.

Let’s return specifically to why Goldcorp chose to buy out Kaminak, versus some other play somewhere else. As I mentioned above, I was there at Coffee for a unique opportunity to visit the site. I decided to ask about what are Goldcorp’s criteria are for takeover targets, specifically Kaminak.

Frankly, I wasn’t sure how open the Goldcorp reps would be. Some information is proprietary, and I understand that. Still, I was able to glean quite a bit of information. Here’s what Goldcorp reps mentioned during discussions and/or what was apparent to me during my site visit.

Goldcorp likes Yukon territory because it’s a well-regarded, safe jurisdiction. The legal regime is secure. Rule of law prevails. The government is willing to work with mining firms. Apparently, Goldcorp is wary of political developments and unfavorable trends in many other places. Thus, Goldcorp is looking for great deposits in locales with low political risk, like Yukon.

In addition, Yukon has an astonishingly good approach to industry working with First Nation people. In recent years, Yukon has been a place where projects get permitted and the work gets done. It’s all very businesslike. I cannot emphasize this last part too much. The First Nation relationships are entirely respectful and professional, and to the extent they work well, they’re admirable. They’re a model for others to emulate across Canada, and in other parts of the world.

Between Yukon’s government and its First Nation environment, I don’t believe that Goldcorp’s move for Kaminak is just some sort of flash in the pan or passing investment fad. This is not a case of “Yukon Fever,” as one ill-informed wag mentioned in a note to me. Not at all; Yukon offers a fabulous treasure trove of mineralization. It lays out a welcome mat for companies that want to approach things in a serious, professional, developmental mindset.

Indeed, the gold ounces are present at Coffee and that’s what Goldcorp seeks; it is a mining company after all. But more important, from what I saw, is the overall quality of Kaminak’s personnel. They discovered those ounces and are entirely conversant with the details of everything. My impression was that Kaminak staff are collectively superb.

While on site, I learned that Goldcorp has retained almost all Kaminak technical staff, and it’s no wonder. The Kaminak people are extremely good at their respective jobs. I met several geologists and technical staff, all of whom are sharp as tacks and totally committed to making Coffee work as a future gold mine.

To sum up, my takeaway from Coffee was that Goldcorp bought Kaminak for the gold resource (naturally), the jurisdiction, the overall low-risk profile, the “doability” of the project within reasonable time and technical and professional excellence up and down the line.

My takeaway impression I got from my visit is that Goldcorp uses an analytical process similar to our M.I.D.A.S. system here in Rickards’ Gold Speculator. Guess what: It works!

My partner Jim Rickards has said over and over that gold is heading to $10,000 an ounce. Given surging gold demand around the world and declining production in the years ahead, he could very well be right.