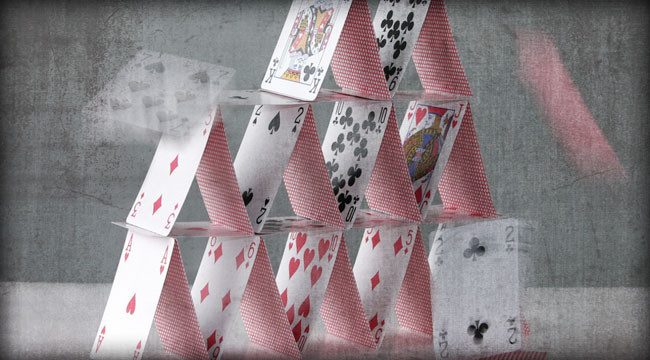 The lack of follow-through after the Fed’s historic announcement last week leaves us wondering:

Have equity investors already priced in “QE Forever”? If so, is there nowhere left to go but down?

We will leave that thought on the table… get up… and look out the window.

After all, the federal emergency workers had not merely pulled Goldman Sachs’ nuts out of the fire; they had saved an entire civilization and way of life.

We wish we had been there. We would have loved to see the look on former Bear Stearns boss Jimmy Cayne’s face. He was once the richest player on Wall Street, with a stake in Bear Stearns worth more than a billion dollars.

In July 2007, he was playing bridge in a championship match when executives of Bear Stearns came to the table.

“Not now. Can’t you see I’m in an important game?”

“But Jimmy, there’s something you should know… something that can’t wait.”

“All right already. What is it? Blurt it out, man!”

Poor Jimmy. That moment marked the end of his greatness… and prefigured the Great Deleveraging, which would begin a year later when Lehman Bros. bit the dust.

Cayne later sold his billion-dollar stake in Bear Stearns for $61 million — and he was lucky to get that.

As every sentient biped knows, the developed world entered a financial crisis in 2008. Actually, the first cracks appeared a year earlier with Bear Stearns and distress in the most junky of all junk debt markets — subprime.

By 2007, this toxic debt had fallen so far below prime that you couldn’t find it with a metal detector. Besides, there was no metal — precious or base — in it. It was all paper. And the paper wasn’t worth a fraction of what people had paid for it.

But the Lehman bankruptcy marked the beginning — and, as it turned out, the end — of the Great Deleveraging.

Thereafter, the feds were on the case… sandbagging the levies… dusting the forests with fire-killing chemicals… drilling escape holes for those trapped below the surface… pushing the debris out of the way… and in general making sure that the disaster was held in check.

For this, an adoring press awarded them hosannas and hoorays. Their photos appeared in popular business magazines along with captions describing them as “heroes” and “geniuses.” After all, the federal emergency workers had not merely pulled Goldman Sachs’ nuts out of the fire; they had saved an entire civilization and way of life.

They were successful in preventing a Great Depression. Everybody said so.

Was there ever a better time to be a central banker?

The press took their words… examined them carefully… and uttered not a critical word. And no one mentioned that the words were hollow, meaningless or plain stupid.

Instead, people thought they were being cagey… or intentionally opaque… as though the bankers were playing such a high-stakes game that they were not under any obligation to let their employers know what the hell they were actually doing. (An art mastered by none other than “the Maestro” himself, Alan Greenspan.)

And now we look around and wonder: What has improved? How have the problems, imbalances and excesses of 2007 been addressed?

One big change, perhaps, is the real estate market in the U.S. It is no longer so bubbly. Ordinary people no longer expect to get rich by buying residential property. Now, it’s the turn of big private equity outfits such as the Blackstone Group to try to make a fortune on bricks and mortar. (The group’s real estate division now has a staggering $64 billion in assets under management.)

The big banks… have they been broken down and broken up?

No. They’re bigger than ever.

Health care… education… defense… finance… Have the zombie sectors been brought under control?

No. They are more out of control than ever. And they’re devouring an ever-larger piece of GDP.

And has excess debt — the real cause of the 2008 financial crisis — been eliminated, or at least reduced?

In the U.S. private sector, debt has been cut back… but only a little. The household savings rate rose to 6% immediately following the crisis. Now it has slipped back to about 4%.

And total debt (public and private) is higher than ever — thanks to “help” from the feds.

According to former chief economist at the Bank for International Settlements William White (one of the few economists to accurately predict the subprime meltdown), total debt in the developed countries as a percentage of GDP is 30% higher now than it was in 2007.

Even at 77, if we make it that far, we may be able to find work flipping burgers!

The feds decided to fight fire with fire. To solve the debt problem, they added debt! The genius of this plan was, we admit, not immediately obvious. But over time, the elegant brilliance of it has practically blinded us.

The feds have always had one overriding goal: to transfer money and power to themselves. They create no wealth. They can get it only by taking from others. The crisis — which was nothing more than a natural market correction in an unnaturally extreme debt cycle, caused largely by the feds — gave them cover for larceny on an even grander scale.

TARP, QE, ZIRP, Operation Twist — none has had a net positive effect on the real economy.

Debt is the problem; each of these fixes has left us with more of it. Obviously, that’s not the way to fix things. But from the feds’ point of view, the program has worked beautifully.

Had the correction been allowed to run its course, deleveraging would have wiped out many investors and many companies — especially in the finance sector.

Instead, thanks to the feds’ interventions, they are still in business… still profiting from the feds’ debt-friendly policies… and still recycling much of the cash back to the feds.

News flash: The feds’ easy money goes into the pockets of their friends, clients, supporters — and into their own pockets, too.

Meanwhile, in the real world, people are struggling. From Bloomberg, a sobering story of a 77-year-old former vice president of marketing for Oral-B who’s been forced to flip burgers to make a wage:

“It seems like another life. At the height of his corporate career, Tom Palome was pulling in a salary in the low six figures and flying first class on business trips to Europe.

“Today, the 77-year-old former vice president of marketing for Oral-B juggles two part-time jobs: one as a $10-an-hour food demonstrator at Sam’s Club, the other flipping burgers and serving drinks at a golf club grill for slightly more than minimum wage…

“Even many affluent baby boomers who are approaching the end of their careers haven’t come close to saving the 10-20 times their annual working income that investment experts say they’ll need to maintain their standard of living in old age.

“For middle-class households, with incomes ranging from the mid-five to low six figures, it’s especially grim. When the 2008 financial crisis hit, what little Palome had saved — $90,000 — took a beating, and he suddenly found himself in need of cash to maintain his lifestyle. With years, if not decades, of life ahead of him, Palome took the jobs he could find.”

Actually, this report has a positive message. It helps settle our nerves. Even at 77, if we make it that far, we may be able to find work flipping burgers!

But most people will take little comfort from this story. Most people would rather sit at home and collect their pensions.

But the feds are ahead of them. Reducing the rate of return on safe investments, the feds have taken trillions of dollars from the pockets of people such as Mr. Palome.

Their savings earn little income. And the pension funds into which they pay their money have a hard time keeping up with their commitments. Deficits grow. Defaults and cutbacks loom.

Household income is back to levels not seen since 1984. And the number of people with real jobs as a percentage of the working age population has never been lower.

If this is success… then give us failure!

Ed. Note: Living comfortably in retirement should not be an anxiety-inducing prospect. But for many Americans it is. They simply haven’t saved enough, and so turn to burger flipping like poor Mr. Palome. That’s why we give our Daily Reckoning email readers regular chances at real, actionable investment opportunities, specifically designed to help fund your retirement. If you’re not yet a Daily Reckoning email reader, don’t worry. You can sign up for FREE right here. It only takes about 30 seconds and you can cancel at any time. You have nothing to lose and a lot to gain. Don’t wait. Sign up for free today.