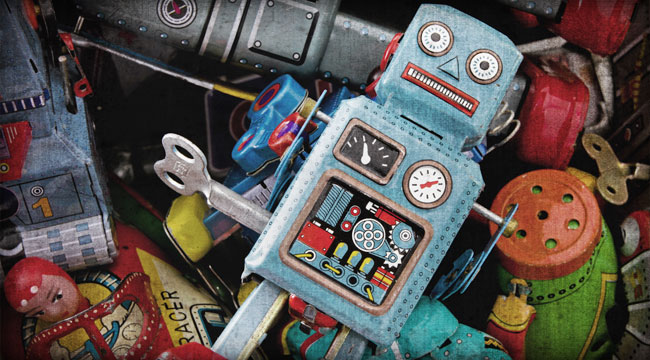 Oy… as if being beaten over the head with an examination of every word from the current Fed chairman isn’t painful enough, some researchers are doing it retroactively.

“Researchers at Edinburgh University,” writes 5 Min. Forecast’s Dave Gonigam citing The Globe and Mail this morning, “used text analysis software, Diction 6.0, to analyze some 400 speeches and comments between mid-1999 and mid-2012, looking at ‘certainty, optimism and realism’ in the comments of the world’s most powerful central bankers.”

“Aside from proving conclusively,” Dave continues, “the researchers have way too much time on their hands, the study found a 1% increase in the amount of certainty in Greenspan’s voice could move the gold price 0.1%.”

A similar rise in Ben Bernanke’s tone did not move gold even by that fraction. Would that our jobs as prognosticators be so easy!

“The world’s financial asset prices have become a plaything of central banks,” writes Ambrose Evans-Pritchard in The Telegraph, “and the sovereign wealth funds of a few emerging powers.”

Today, we catch up on a little light reading while waiting — along with the rest of the market — to hear whether the Maestro’s ill-begotten successor will announce a plan to slow Fed purchases of assets down from $85 billion a month to some unknown lower number. Whether those assets include Treasuries and mortgages… just Treasuries… just mortgages… or who knows what?

Evans-Pritchard cites a Barclays study showing together central banks and sovereign wealth funds are buying $1.8 trillion worth of AAA or safe-haven bonds each year from an available pool of $2 trillion.

“Nothing like this has been seen before in modern times,” Evans-Pritchard notes, “if ever.” He continues with the data:

“That is why Fed taper talk has become so neuralgic,” Evans-Pritchard surmises, “and why we all watch Chinese regulators for every clue on policy.”

Half an hour before the Fed announcement, the markets took a small dive, stocks shed 40 points and gold started to gyrate down $10.

Sip of coffee. Back to Evans-Pritchard.

“In Fed hiking cycles over the past half century,” he cites Jan Loeys from JP Morgan saying, “10-year U.S. Treasury yields on average bottomed some six months before the first rate hike. In the current cycle, where rate cuts have been complemented by large-scale asset purchases, the end of the easy-money period is harder to define.

“The end of the current easy-money regime is set to have a bigger impact than previous ones, as the current one will have lasted much longer and was much more extreme. We have learned from past regime changes that the longer they last, the more the market will have got used to them, and could even be said to become leveraged and addicted to the old regime.”

Indeed. Addicted to the old regime…

“We had an expression in Empire of Debt,” our erstwhile writing partner Bill Bonner recalled in an interview we did for the documentary I.O.U.S.A. , “that basically said there are not many people who can afford to live like Americans today, and too bad Americans can’t either. The fact is that Americans live beyond their means. This is a very, very old concept, but today people don’t even think about it because they don’t know what their means are.”

As every day passes, they have become ever more addicted to the old regime.

Ahh… and there it is… the Bernanke announcement. The Fed is not going to pull the needle from the market’s collective arm after all. They’ll continue business as usual with $85 billion in asset purchases per month.

Sheesh. All that hand-wringing over “tapering” for what? Let the party continue.

P.S. The Bernanke announcement is just another example of the Fed not seeing the big picture — something we write about frequently in the pages of The Daily Reckoning email edition. If you’re not yet receiving the DR — delivered for free straight to your inbox each day — you’re only getting half the story. Click here now to sign up now, completely free.