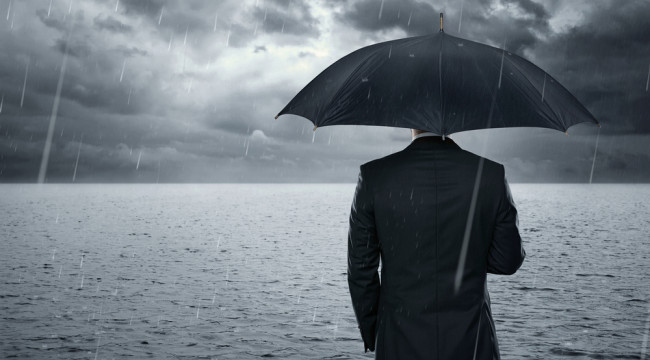 Fed's "Doom Loop" Locks Us On Course for Another Crisis

One says Goldman Sachs is calling the shots now…

Another says China has the Fed under its thumb…

All of them are right.

All of the powers that be – including the Fed – want the party to continue. All know that if the Fed starts going around and turning off the lights and unplugging the music, the party is over.

Too Much of a Good Thing

As we tried to understand in our recent book, Hormegeddon: How Too Much of a Good Thing Leads to Disaster.

Public policies create their own support. When they’re big enough, and go on for long enough, they become unstoppable.

Yesterday, the Dow rose by 125 points, recovering just under half ofFriday’s losses.

But the bigger picture shows a stock market cut off from reality –pretending to “party on” while desperately trying to ignore that the rest of the revelers have gone home.

A report in the Financial Times on a conversation with hedge fund manager John Burbank of Passport Capital begins:

The world economy is locked on a course toward an emerging markets crisis and a renewed slowdown in the U.S., despite the Federal Reserve’s decision last week to hold off on a rise in rates.

China, the world’s No. 2 economy, has already seen its stock market lose more than 40% of its value.

Japan, the world’s No. 3 economy, was supposed to be doing the funky chicken by now, revived from its funk by Prime Minister Shinzō Abe and a long line of prominent economic advisors, including Paul Krugman.

Under Abe, Japan has done “whatever it takes” to get its economy moving ahead. But whatever it did was not whatever it needed. Instead of racing ahead, Japan seems to be in its own permanent doom loop.

As of last year, at least, the European Union had a larger economy than the U.S. But now, Europe, too, is in a slump. At least that is what we gathered from listening in on a conversation over dinner last night.

Listening to your neighbors in a middle-class eatery is not one of the approved methods of economic research. But sometimes it reveals things the statistics don’t tell you.

Autumn began yesterday. The trees along the River Seine are beginning to lose their leaves. The first brown and curling leaves in Paris are like the first gray hairs on a beautiful woman; they make her more attractive than ever.

It is raining today. The odor of fall is in our nostrils. The City of Light can be dark and gloomy in the autumn. But it only makes the warmth inside even more fetching.

“Oh, you know, Anne went to the École Polytechnique [one of France’s top universities],” began the woman at the next table while we were eating our filet mignon de porc.

The restaurant is one of our favorites, Le Beaujolais, on the Avenue de Suffren in the 16th arrondissement.

It is not for its food that we like it but for its style. It is old-fashioned, like a bistro from 50 years ago – with rich woodwork, chandeliers, and brass railings that reflect the yellow light.

It was Monday night. Few diners were there. It was easy to eavesdrop.

“Poor Anne. She is so unhappy. And when she is unhappy she tends to eat too much and gain weight. We thought she would get a good job in Paris.

“For months and months, she lived with us at home… going to interviews. She was getting depressed. And partly she was depressed because she didn’t have a boyfriend. But I told her, ‘If you keep eating like that, what do you expect?’

“Finally, after about six months, she answered an ad on the Internet for someone to work in San Francisco. Well, you know there… if you can just walk and talk at the same time… if you present yourself well, you know, if you dress properly and have a good education, apparently, you don’t have any trouble getting a good job.

“Her employer has one of these Internet things. I’m not sure what they are doing. But they are worth billions. Three young guys started the business. And they’re very happy with Anne.

“And you know, even though she is a little ‘heavy,’ she’s pretty normal for there. She didn’t admit it, but I think she has a boyfriend already. And she’s only been there a month. I think he’s Chinese or something.

“When she first started looking for work overseas, she thought she’d get a job in Brazil… or maybe even China. But they are both doing worse than France.

“Apparently, it is only the U.S. that is hiring people. And they like hiring foreigners.”