Despite the absence of any empirical support, Fed governors and staff economics persist in their reliance on the Phillips Curve, which predicts that low unemployment leads to rising inflation. U.S. unemployment at around 4% is in fact at 17-year lows.

The Fed insists that the time to tighten monetary conditions is now, before the inflation emerges.

The other ostensible reason for Fed tightening is official confidence that the U.S. economy is on a solid growth path. As with the Phillips Curve, there is no evidence for this belief.

The U.S. savings rate plunged to 2.1% by late 2017, a fraction of the 6.3% rate that prevailed from 1970-2000. The combined impact of the 2017 Trump tax cuts, bipartisan congressional repeal of discretionary spending caps, and rising student loan defaults will push U.S. budget deficits well past $1 trillion per year indefinitely.

This added national dissaving will push the U.S. savings rate to zero.

This means the U.S. must either reduce investment or borrow savings from abroad. Both courses hurt growth. Other headwinds to growth include Trump’s trade war, impediments to immigration, and higher real rates as the U.S. Treasury tries to attract buyers for the $10 trillion of new debt it must sell in the decade to come.

These specific headwinds are of recent vintage and come on top of the pre-existing secular stagnation due to demographics, deleveraging, and declining productivity.

The Fed understands these impediments to growth although they cannot publicly pivot away from their rosy scenario. Still, this begs the question, why is the Fed tightening if the economy is so weak?

The answer, as I’ve said repeatedly but can’t say enough, is that the Fed is preparing for the next crisis. The evidence is clear that it takes 3% to 4% in rate cuts to pull the U.S. out of a recession. The Fed cannot cut rates even 3% when the fed funds rate is less than 2%.

So, the Fed is in a desperate race to raise rates before a recession arrives so they can cut rates to cure the recession. 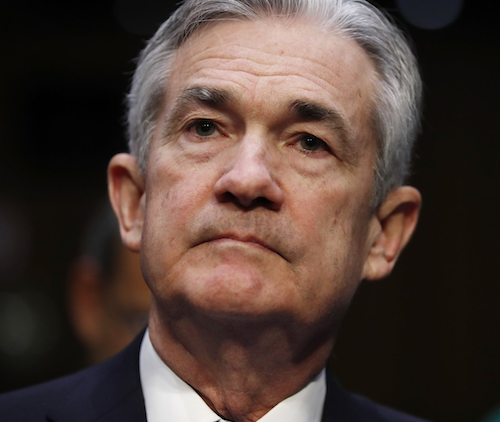 New Fed Chair, Jay Powell, has inherited a rate tightening policy from his predecessor, Janet Yellen. That policy calls for four rate hikes per year, each March, June, September, and December, of 0.25% each. However, the Fed has shown a willingness to “pause” the rate hikes when the economy slows down or stocks become disorderly. Powell will raise rates on March 21, 2018 but is likely to pause later this year as the impact of prior rate hikes slows stocks and the economy.

How does balance sheet normalization fit in?

Reducing the balance sheet is a precautionary step in case a recession arrives before rates reach 3%. In that case, the Fed would cut rates as far as they could until rates hit zero, and then revert to QE. (The Fed has shown no inclination to use negative rates, and the evidence from Europe, Sweden and Japan is that negative rates don’t work anyway).

The Fed does not have an unlimited capacity to monetize debt. The constraint is not legal, but psychological. There is an invisible confidence boundary on the size of the Fed’s balance sheet. The Fed cannot cross this boundary without destroying confidence in the central bank and the dollar.

Whether that boundary is $5 trillion or $6 trillion is unknowable. A central bank will find out the hard way instantaneously when they cross it. At that point, it’s too late to regain trust.

The likely outcomes and the Fed’s real choices are the following:

In one scenario, the double dose of tightening from rate hikes and QT slows the economy, deflates asset bubbles in stocks, strengthens the dollar, and imports deflation. As these trends become evident, disinflation could tip into mild deflation.

Job creation could dry up as employers rein in costs. A stock market correction will turn into a bear market with major indices dropping 30% or more from 2018 highs.

All of these trends would be exacerbated by a global slowdown due to the trade war, concerns about U.S. debt levels, and reduced immigration. A technical recession will ensue. This would not be the end of the world. But it would be the end of one of the longest expansions and longest bull markets in stocks ever.

The other scenario is a more complex process with a far more catastrophic outcome. In this scenario, the Fed repeats two historic blunders. The first blunder occurred in 1928 when the Fed tried to deflate an asset bubble in stocks. The second blunder was in 1937 when the Fed tightened policy too early during a period of prolonged weakness.

Until December 2017, the Fed rejected the idea that it could identify and deflate asset bubbles. This policy was based on the experience of 1928 when Fed efforts to deflate a stock bubble led to the stock market crash of October 1929 and the Great Depression.

The Fed’s preference was to let bubbles pop on their own and then clean up the mess with monetary ease if needed.

However, the popping of the mortgage bubble in 2007 was far more dangerous and the policy response far more radical that the Fed expected going into that episode.

Given the continued fragility of the financial system, the Fed began to re-think its clean-up policy and chose a more nuanced stance toward deflating bubbles.

This new view (really a reprise of the 1928 view) emerged in the minutes of the Federal Open Market Committee, the Fed’s rate policy arm, for November 1, 2017, and was echoed in the public remarks of Fed officials in the days following this FOMC meeting.

This newfound concern about asset bubbles played out in the FOMC’s decision to raise rates at their December 13, 2017 meeting despite continued worries about disinflation.

As if to validate the Fed’s new approach, U.S. stock markets soon suffered a sharp 11% correction during February 2 – 8, 2018; a mild preview of what happens when the Fed tries to deflate asset bubbles. The Fed’s attempted finesse in financial markets could well result in a market crash as bad or worse than 1929.

The impact of such a market crash will not be confined to the U.S. In fact, a stronger dollar resulting from tight monetary policy could precipitate a crisis in emerging markets dollar-denominated debt that transmutes into a global liquidity crisis through now well-known contagion channels.

The second Fed blunder was an effort to normalize rate policy in 1937 after eight years of ease during the worst of the Great Depression beginning in 1929. Today’s policy normalization is almost an exact replay.

Economic performance from 2007 to 2018 is best understood as a depression, not in the sense of continual declining GDP, but rather actual growth that is depressed relative to potential growth even without outright declines.

It is understandable that the Fed wishes to resume what it regards as normal monetary policy after a decade of abnormal ease. The difficulty is that the Fed has painted itself into a corner from which there is no easy exit.

When the Fed tried to normalize policy in 1937 they triggered a second severe technical recession following the 1929-1933 recession and helped to prolong the Great Depression until 1940.

Reverting to monetary ease does not allow an escape from the Fed’s dilemma. More ease merely reflates asset bubbles, increases the scale of the system, and insures a crash of unprecedented magnitude.

As the Fed attempts the “Great Unwinding” from ten years of extraordinary monetary policy, there are no good outcomes.

And if the Fed goes back to ease, the asset bubbles will grow larger and a catastrophic collapse could take stocks down 80% or more as happened in the Great Depression.

The Fed has no good choices, but investors do. Now is the time to reduce holdings of stocks and diversify into cash, gold, silver, and real estate.

This diversification will preserve wealth while the currency wars and trade wars rage all around, and a befuddled Fed tries to find its way.