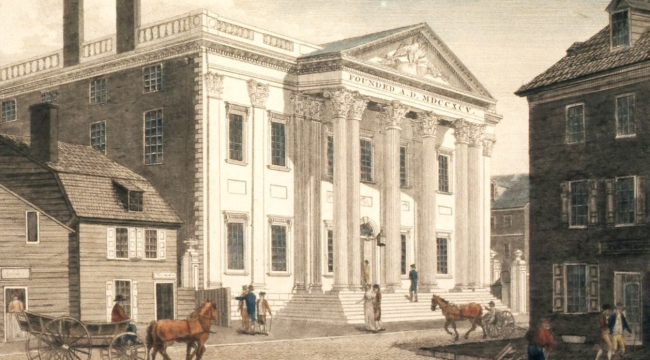 There was a time when central banking was an honest profession.

Central bankers provided financing for the government. They backed the banking system, too, by holding savings as reserves, which they lent to solvent member banks in emergencies.

They were tight-lipped, tight-laced and tightwads. Their role was to say “no” more often than “yes.”

When the king wanted money to fight in a war… or build a bridge… the banker would give the terse reply: “Sire, we don’t have any.”

Real money was backed by gold. And credit had to be backed by real money, which meant it had to be saved. Savings were limited, as was money.

Savings backed 100% of U.S. credit needs until about 1973… two years after President Nixon first announced that the dollar would no longer be backed by gold.

Then, almost unnoticed, a new financial system took over… with new central bankers in control of it.

Forty-five years later, America saves scarcely 20% as much as it issues in new credit.

The other 80% is “funny money” — credit created out of nowhere by the Fed, by banks and by foreign central banks (mostly recycling trade surpluses).

Unlike the real-money system that prevailed until 1971, this system — with its heavy reliance on credit — is, surprise, surprise, extremely vulnerable to the credit cycle.

This is the “doomsday bug” buried in the world’s money system.

When the credit cycle turns — when people begin to notice that the whole system is FUBAR and become reluctant to lend — the world’s money disappears… and the whole thing blows to smithereens.

But back to honest central bankers…

Another key responsibility of the pre-1971 central banker was to protect the national currency.

Money was limited. Everyone knew it. You couldn’t afford to waste it. Or lose it. Or depreciate it.

And if a banker failed, he was disgraced, fired… and ruined. In ancient England, a banker who lost the kingdom’s money was castrated.

Times have changed, as they say. Now central bankers are more secure in their private parts and public illusions. They are no longer expected to act within an economy but upon it.

Nor are they expected to confine their credit — the precious savings of the realm — to solvent institutions that will pay it back.

Instead, they are encouraged to spread their fake money far and wide, scattering it like manna upon every half-wit and spendthrift in the empire.

Do the feds have some cockamamie spending project? Does a corporation want to borrow to buy back its shares? Do the baby boomers want more medical benefits?

Hey, no problem… says the Fed. There is plenty of this fake money for everyone.

No need to dip into the nation’s savings to fund the fool projects. Now the central bank can conjure up credit money — out of nowhere!

Gone are the tight lips and carefully chosen words. Now they will say anything, gabbing away like inmates in a special asylum for lunatic economists.

Today, the world’s major economies, twisted and befuddled by central bankers’ policies, depend on debt. In the U.S., $2.5 trillion in new credit is required every year — just to stay in about the same place.

Less than that causes a recession… which sets off a credit contraction, the last thing the feds can tolerate.

But total savings in the U.S. amount to only about $500 billion.

Uh… you can do the math later.

Meanwhile, Bloomberg reports that the U.S. Fed is less likely to “blink” than in the last tightening cycle:

U.S. central bankers appear to be on course to raise interest rates twice more this year and remain confident in their forecast for growth of around 2% despite a series of weak first-quarter reports…

The Fed will put out both eyes with a ballpoint pen before it will allow a return to honest finance.

It’s not going to happen.