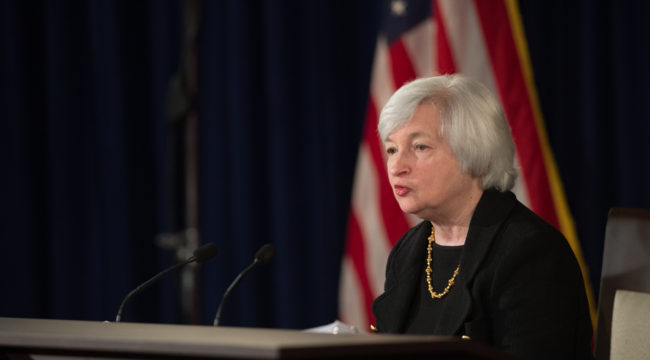 The Fed Stares Reality in the Face

Janet Yellen maintains a persistent belief in the Phillips curve, which assumes an inverse relationship between unemployment and inflation.

As unemployment goes down, labor scarcity leads to wage increases above growth potential, which leads to inflation.

In a recent speech, Fed governor Lael Brainard, an ally of Yellen, said the Phillips curve today is “flat.” That’s a polite way of saying there is no curve.

Yellen is also confused about what causes inflation other than the Phillips curve. She believes that monetary ease, acting with a lag, feeds inflation. Therefore, it is necessary to tighten policy before inflation appears to avoid getting behind the curve.

But money supply does not cause inflation. It may add fuel to a fire, but it’s not the spark. The Fed has created $3.5 trillion of new money since 2008 and there’s no inflation in sight.

What causes inflation is not money supply but psychology, expressed as velocity. Velocity is the speed at which money turns over through lending and spending. It depends on behavioral psychology, what Keynes called “animal spirits,” regardless of the amount of money around.

In other words, the example with the larger money supply has lower inflation. Sorry, Janet.

In recent remarks, both at the FOMC press conference on Sept. 20 and a speech last Monday, Yellen left markets with the impression that the Fed would raise rates in December based on the arguments noted above (low unemployment and monetary policy acting with a lag).

At the same time, she noted that inflation has been going down sharply and that the Fed really doesn’t understand why (a refreshing note of humility).

Yellen dismisses the weak inflation data as “transitory” and clings to her forward-looking Phillips curve fears as a reason to raise rates in December. Markets seem to agree.

That was when the August core PCE year-over-year (YoY) inflation figure was released.

Core PCE YoY is the one inflation metric the Fed focuses on. The Fed’s target for that measure is 2%. Here are the data so far this year:

The real data have moved in the opposite direction from the Fed’s 2% target by a full 0.5% in seven months. That’s a big move, and that’s a long period of time to cling to the “transitory” explanation.

I told Rickards’ Intelligence Triggers subscribers on Thursday that if core PCE came in at 1.4% or lower Friday morning, it would drive a stake into the heart of Wall Street research departments and kill any chance of a December rate hike.

If it was 1.5%, I said it wouldn’t move the needle much one way or the other. Yellen would take a “wait and see” approach. If it was 1.6% or higher, I said that would have increased the odds of a December rate hike and given encouragement to Yellen and her “transitory” theory.

So what did August core PCE come in at Friday?

The number was 1.3% — the lowest so far this year and below the minimal 1.4% that could possibly justify a December rate hike.

There will be no December rate hike.

Yellen only has a few months left as chair. She would like to show that she “normalized” rates and the Fed’s balance sheet as much as she could before she leaves.

On the other hand, she does not want her legacy to be that of the Fed chair who caused a recession by tightening into weakness, as happened in 1937.

But if we do get a recession, Janet Yellen’s legacy will be the last thing on anyone’s mind.