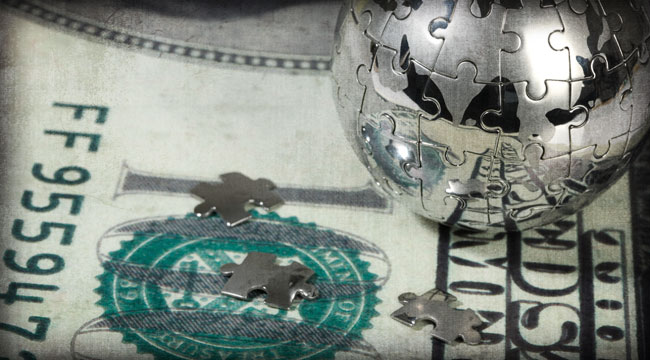 Fed QE Has Nothing to Do With Rising Stock Prices

There’s a good predictor of U.S. crude oil imports. Just focus on the per capita consumption of chicken.

There is a really good correlation between the per capita consumption of cheese and the number of people who die by becoming tangled in their bedsheets:

Yeah, I know. I didn’t think you could die that way either.

Here’s one more… Apparently, the more films Nicolas Cage appears in, the more people drown by falling in a swimming pool.

I think you get my point. It’s an old one but a good one: Correlation is not causation. In other words, none of these things has anything to do with each other. It’s just a coincidence. (These charts above, by the way, come from a fun website called “Spurious Correlations.”)

I’ll give you one last chart that you’ve probably seen some version of before. It shows how the size of the Fed’s balance sheet correlates well with stock prices: 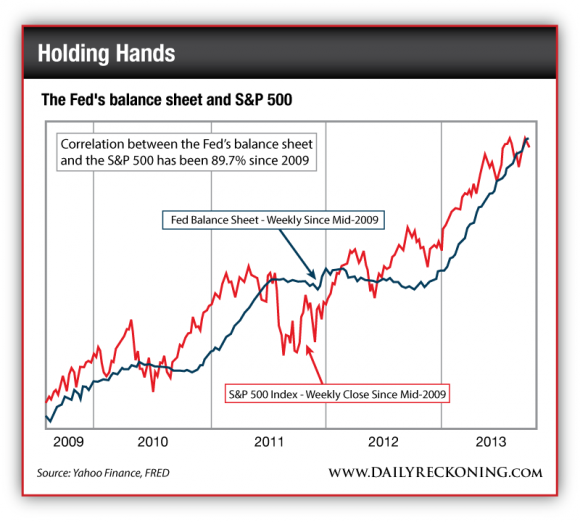 People use this chart (and I have, admittedly, in the past) to show that the Fed’s QE has set off a stock market rally. Remember, quantitative easing (or QE) means the Federal Reserve Bank buys securities. As it does so, the amount of assets held by the Fed rises.

I submit to you that the above relationship between QE and stock prices is just another spurious correlation.

I am not the first to say so. John Hussman, of Hussman Funds, wrote in one of his weekly letters, “Quantitative easing has no mechanistic relationship to stock prices.” It’s simply not there, not anymore than there is between eating cheese and dying in bedsheets.

(He also writes: “Most of what investors believe about QE is imaginative.” I certainly agree with that. You may remember my piece “What the Fed is Really Doing to Your Money”, where we worked out a number of counterintuitive conclusions about the Fed’s program.)

People believe QE pushes stock prices higher only because it seems to. But there is no reason why when the Fed buys securities stocks should go up. Stocks have gone up so far, but that’s no more proof of causation than saying, “So far, the more movies Nicolas Cage is in, the more drowning in swimming pools there has been.”

It’s kind of surprising, but there seems to be no consensus on the data here.

An analysis by Deutsche Bank concludes:

“Since 2000, rising bond yields have mostly been associated with rising equity markets. Even sharp rises in bond yields have overwhelmingly coincided with positive equity returns (88% of instances).”

But yet another study (by J.P. Morgan) found that over the last 50 years, rising rates meant rising stock prices as long as the 10-year Treasury rate was under 5%.

Yet another study — this one by Doug Ramsey at Leuthold Group — looked at stock valuations and bond yields going back to 1878 and found trouble starts for stocks only when the yield gets up to 6%.

This gets me to the title of my note today: “Qui Numerare Incipit Errare Incipit.” This is an old Roman maxim that means, “He who begins to count begins to err.”

Oskar Morgenstern (1902-1977) used this as the title for a piece appearing in Fortune magazine in October 1963. Morgenstern wrote a book called On the Accuracy of Economic Observations, of which a second revised edition came out that year. And this piece was a summary of the themes in the book. It is one of my favorite essays by an economist of any stripe.

Morgenstern writes about how economic statistics pretend to have an accuracy they can’t possibly have. He mocks the idea of reporting unemployment as, say, 6.3%. Because the error rate in the data is so large, despite the presence of that decimal point. He targets not only economic data, but data of all kinds — casualties in war, population figures and more.

It’s a thoughtful essay and one I’ve reread a number of times over the years. While Morgenstern was not writing about correlation per se, I think the spirit of the idea applies. We know far less than we think we know. And just because we can produce and manipulate an array of numbers, we should not assume they tell us something useful.

Or as Morgenstern more eloquently puts it:

As investors, we can fall in love with what charts seem to tell us. We can create wonderful correlations and patterns. But we need to be very careful about how we interpret these. We need to be skeptical. To use another Latin phrase, attributed to Descartes, “De omnibus dubitandum” (Doubt everything).

The real relationships between things can be counterintuitive (as with QE). And sometimes you have to work these out before you look for evidence in the numbers.

P.S. As Bill Bonner is fond of saying, you can’t trust numbers – least of all any “official numbers” that come from the Fed or the government. But there are ways to make even the most untrustworthy numbers work to your advantage. In today’s issue of The Daily Reckoning, I gave readers a chance to access my latest research, which shows you exactly how to make money even in the face of lying statistics – including one strategy that could make you five times your money thanks to a loophole from the 2008 financial crisis. It’s just one small benefit of being a subscriber to the FREE Daily Reckoning email edition. Don’t miss another issue, or any of the great investment opportunities that come with it. Sign up for FREE, right here.