All of private U.S. debt growth since the financial crisis and the inception of “extraordinary” monetary measures in the fall of 2008 has been in the business sector. On a net basis, the modest growth of business debt during the last seven years has been entirely recycled back into the speculative pools of Wall Street.

This modest growth of business debt did not fuel added output growth. Instead of spending for plant and equipment, thereby spurring measured GDP growth today and economic productivity and efficiency over the longer run, it all went into financial engineering.

In so doing, it caused the massive inflation of existing financial assets in the secondary markets and thereby delivered untold windfalls to the 1% who speculate there.

At the end of the first quarter of 2008, nonfinancial business debt stood at $10.1 trillion. Since then, it has grown to $12.5 trillion. About $400 billion of that went into increased balance sheet cash, leaving a net debt gain of $2 trillion.

The chart also shows why the Wall Street mantra that Corporate America is flush with cash is so misleading. On the margin, that cash was obtained from the proceeds of $2.5 trillion of new business borrowing. That borrowing, in turn, was enabled by the desperate scramble for yield touched off by the Fed’s drastic interest rate repression. Net business debt is actually at an all-time high.

To be sure, this $2 trillion gain is modest compared with the nearly 4 times increase in net business debt between 1987 and 2008. But the crucial point is that every single dime of it went into financial engineering, not productive investment for future growth.

So the business channel of monetary policy transmission is broken, too. Low interest rates did not stimulate capital spending as postulated in the old Keynesian textbooks. They stimulated, instead, bubble finance.

The Fed’s drastic falsification of financial asset prices has turned the C-suites of corporate America into gambling parlors. On the margin, all of the gains in business debt since 2008 have been flushed right back into Wall Street. This has happened in the form of stock buybacks and debt-financed merger-and-acquisition takeovers and leveraged buyouts. 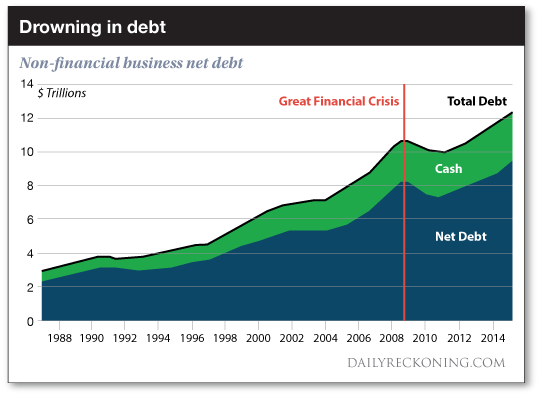 The evidence that zero interest rates have not promoted business borrowing for productive investment is also plain to see. During the most recent year (2014), U.S. businesses spent $431 billion on plant, equipment and software, after depreciation.

That was 7% less than net business investment in 2007. And these are nominal dollars!

All other things being equal, net business debt should actually have been reduced over the last seven years. Instead, that money went back into the Wall Street casino, where $2 trillion of buying power helped to levitate the stock averages still higher.

The wrongheaded post-crisis effort by central banks to flood the market with easy money to induce debt-shackled households to borrow and spend has backfired. What it actually did was transform the C-suites of Corporate America into stock trading rooms. That has ensured that the Fed’s massive emission of fiat credit never leaves the canyons of Wall Street.

The proof of the pudding is neatly crystallized by the recent trend in what are called core capital expenditure, or “capex,” orders. Capital expenditure is spending for a physical asset like a building or equipment.

The $69.8 billion in capex spending in August was less than 1% higher than the prior peak of $69.2 billion way back in July 2008. It’s flat with the post-recession rebound level achieved in February 2012.

Moreover, these are all nominal numbers. That means that orders for core capital goods have actually been shrinking in inflation-adjusted terms for the past three years.

But this isn’t the full extent to which the myth that the U.S. economy has reached escape velocity has been invalidated.

Since the turn of the century, when Fed money printing commenced in earnest, even the Keynesians’ favorite but misleading metric on capital spending has faltered. They look at something called “gross real fixed investment” in business assets. It’s expanded at only a 1.9% annual rate for the last 15 years. That’s less than half of the historic 4–5% long-term rate.

Even then, I haven’t totally shown you the shortfall. The problem is that “gross” investment confuses short-term spending with sustainable advances in real output and wealth.

But real output and wealth can’t happen without increases in net investment. That means spending on capital goods above and beyond upkeep from wear and tear. Net business invest has actually dropped by 17% in real terms since 2000.

Here’s the takeaway: While the Fed is financing giant windfalls for the gamblers on Wall Street, the Main Street economy is actually eating its seed corn.

Economic law will ultimately win out. The recycling of $2 trillion of new business debt through the stock market has temporarily goosed index averages, but it has also hijacked productive investment and future corporate profit growth.

Corporate earnings are falling, and the artificial bull market run stimulated by the central banks is on its last legs.

The deterioration of business investment and corporate profits is about to get worse.

That’s because the problem isn’t confined to just one country. It’s global.

Today, central bank falsification of the price of debt and other financial asset prices is instantly transmitted around the global economy. The scramble for yield in a world of central bank financial repression can lead to overinvestment and malinvestment.

These distortions can happen in domestic sectors such as malls, office buildings and warehouses as readily as among internationally competitive facilities like mines, factories and container ships.

The gathering global deflation due after the fracturing of the world’s 20-year credit bubble is a battering ram aimed at capital spending in both the tradable goods and domestic sectors of the U.S. economy.

Recently, there have been announcements by companies like Caterpillar signaling the ongoing collapse of U.S. exports to the global mining industries. Likewise, capital spending in the U.S. shale oil patch is plummeting. And the recent sharp cutbacks in material processing and other export-oriented U.S. industries are only the tip of the iceberg. As corporate credit spreads blow out, new domestic commercial construction will be curtailed as well.

What the Wall Street stock peddlers have completely ignored is that net domestic investment was already badly faltering during the greatest global capex boom in recorded history.

After erupting fivefold during the last two decades, the slowdown in worldwide capex depicted in the chart on the previous page is just getting started. Domestic capital investment will be body-slammed as the global contraction gathers force.

Bubble vision’s endlessly repeated mantra that China doesn’t matter because it accounts for only 1% of U.S. exports is a nonsequitur. It does not require astute observation to recognize that Caterpillar did not export its giant mining equipment just to China. Massive amounts of it went there indirectly by way of Australia’s booming iron ore provinces.

Likewise, the U.S. did not export oil to China. But China’s vast, credit-inflated demand on the world market did artificially lift world oil prices above $100 per barrel, thereby touching off the U.S. shale boom that is now crashing in Texas, North Dakota, Oklahoma and three other states. The fact is every net new job created in the U.S. since 2008 is actually in these same six shale states.

Similarly, U.S. exports to Europe have tripled to nearly $1 trillion annually since 1998. Meanwhile, European exports to China have more than quintupled. Might there possibly be some linkages?

There is an economic and financial train wreck rumbling through the world economy called the Great China Ponzi Scheme. In all of economic history, there has never been anything like it. It is only a matter of time before it ends in a spectacular collapse, leaving the global financial bubble of the last two decades in shambles.