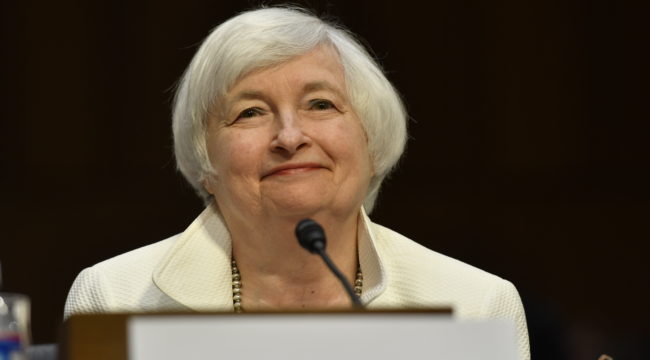 Our old friend “Bad news is good news” is back…

Moreover, most jobs weren’t breadwinner-caliber. The United States now enjoys the services of 34,000 additional waiters and bartenders. And 22,000 more will ply their trades in “social assistance,” or what passes for it. Salary growth also eased.

In a normal world, an underwhelming jobs report might very well frighten the horses. It suggests growth is weak… the way ahead uncertain… and companies pulling in their oars. But when was the last time financial markets could be mentioned in the same day as “normal”?

The Dow didn’t slip an inch on Friday’s news. Neither did the S&P. Or the Nasdaq. They’re all flashing green again today.

“This is probably comforting to the market,” says Jeff Kleintop, chief global investment strategist at Charles Schwab, of the report. No doubt it is, Mr. Kleintop. No doubt it is…

Master of the obvious — otherwise known as Carl R. Tannenbaum, chief economist at Northern Trust —adds the report “does not provide the threat of overheating that might have caused an interest rate increase sooner rather than later.”

And true enough, Fed funds futures slipped to a 20% chance of a September rate hike after Friday’s report. It was 24% beforehand. Goldman Sachs — here wearing a contrarian’s hat — is actually giving a September hike a 55% chance, if you can believe it.

When the Fed took a 25-point baby step last December, the market nearly fell into the blender before Auntie Janet made it clear it was one and done.

And if she raises again this month?

The numbers crunchers at Deutsche Bank crunched some numbers last week. And their work suggested that, quote, “central bank policies are directly responsible for approximately 40% of the (S&P’s) ‘value’ in the market.”

Janet’s been gibbering for months about another hike. She’s always clearing her skirts with the usual “if conditions continue to improve” and “data-dependent” fimble-famble to justify keeping rates nailed to the floorboards.

But if the jobs report was gangbusters, how could she possibly justify another nonhike? Even Janet Yellen has a reputation to consider, after all. Now with the lackluster jobs report, she buys another few months — enough time to get her past the November election…

A rate hike now? And risk a major market sell-off… that could sink the incumbent party… and plop Trump onto 1600 Pennsylvania Ave.? Yellen’s a Democrat with a background as a labor economist. And where one stands… often depends upon where one sits…

As Jim Rickards styles it, a rate hike this month “would give the Republicans the strongest chance at the White House in this fall’s election. That’s because rate hikes would likely lead to recession, and that would bode poorly for the Democrats.”

And this is no typical Republican blank bearing the strong odor of cardboard. It’s Donald Trump. Old Janet would never be invited to another Georgetown dinner party if she helped hand him the election.

That in mind, it seems the chance of a rate hike is substantially less than the 20% the market gives it. The personal is political, after all. And in this case, the economic could be too…