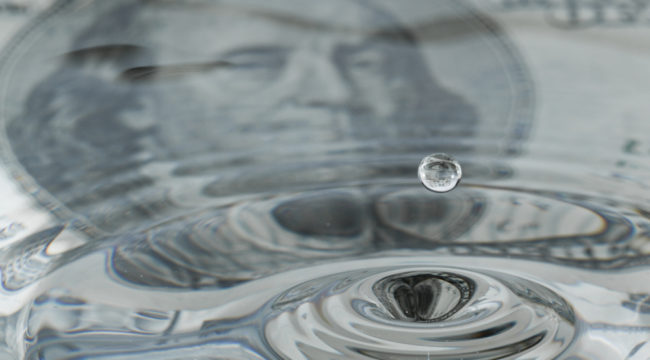 How The Fed Enabled Corporate Kingpins To Scalp Billions

Here’s a comparison that is surely vertigo inducing. On the one hand, the financial system is implicitly held to be so incredibly stable and healthy that volatility on the S&P 500 has been driven to 50-year lows.

Indeed, that lovely condition is apparently expected to persist indefinitely as signaled by implied volatility. During the last 6,000 trading days (since the early 1990s), the VIX Index closed below 10 on 26 occasions or just 0.4% of the time. No less than 16 out of those 26‘below-10’ closes occurred in the last three months!

Yet this insensible bullish calm is happening even as Wall Street is showing itself to be in the throes of unhinged leveraged speculation.

With respect to the unhinged part, consider an incisive post by Wolf Richter on the present carnage in the retail sector. His point was that virtually every one of the rash of companies filing bankruptcy in the sector during the recent past had been strip-mined by private equity operators:

Nearly every retail chain caught up in the brick & mortar meltdown is an LBO queen – acquired in a leveraged buyout by a private equity firm either during the LBO boom before the Financial Crisis or in the years of ultra-cheap money following it.

But Richter’s real point is that the private equity operators in the retail space brought down a double-whammy of leverage on the companies they ransacked. That is, they first loaded up the companies with buyout debt, and then came back for second and third helpings.

Needless to say, in drastically falsifying debt prices in order to stimulate housing and other investments, the Fed had no clue about the collateral effects of its massive and persistent intrusion in the delicate clockwork of capital markets pricing.

So when Janet Yellen & Co profess to see no bubbles they prove their own clueless incompetence. Do they actually think that this would happen in a free market with honest money and market-clearing interest rates?

The question answers itself.

In fact, the asset stripping pattern is every bit as irrational and toxic as were the slicing and dicing of subprime mortgage pools in the run-up to the 2008 financial crisis.

Needless to say, so-called “investors” piled into the flood of dodgy paper because they were desperate for yield. In the dollar fixed income markets, $3.5 trillion of the Fed’s U.S. Treasury and other securities purchases after September 2008 drove real interest rates so low that it virtually forced money managers to scramble out the risk curve in order to find minimally attractive yields.

So doing, they enabled strip-mining transactions that resulted in the eventual destruction of the debt issuers and vast windfall distributions to a few hundred corporate kingpins.

What possessed institutional investors such as state pension funds to invest in such shaky operations?

The answer to this seeming mystery is simply that institutional investors have been completely corrupted by the casino environment that has resulted from three decades of Bubble Finance. In clamoring for yield, institutions have been induced to embrace sweetheart deals for the kingpins that would be laughed out of court in an honest market.

For example, Payless Inc, which was a shoe retailer with 22,000 employees and 4,000 stores, filed for bankruptcy last April. That was less than five years after its original $670 million LBO in 2012. But it was not at all surprising since the company was heading for the wall from the get-go.

But the Payless bankruptcy was apparently dismissed as a victim of bad luck and timing.

I don’t think so. The two LBO firms that did the deal — Golden Gate Capital and Blum Capital Partners — are serial asset strippers and crony capitalist rip-off outfits.

The latter was founded in 1975 by one Richard Blum of San Francisco. He is a classic crony capitalist who parlayed his contacts in the world of California and national democratic politics — ranging from Jimmy Carter to his wife, Senator Diane Feinstein, into billions of funding from political controlled institutions.

Nor is the fact that his fund was among a pack of hedge fund jackals that ran up the stock prices of for-profits education companies to absurd heights based on growth momentum that was totally unsustainable. In fact, these outfits harvested hundreds of billions of student loans from hapless enrollees — of which 33% of the tuition proceeds went to selling bonuses and expenses, 33% to operating profits and the left-overs to the purported cost of education.

Needless to say, the ranks of veterans and blue collar youth were soon populated with debt serfs living in mom and pop’s basement, where they spent their time dodging loan collectors and looking for part-time gigs that rarely paid a fraction of what had been advertised by the for-profit tuition salesmen.

But Richard Blum is not unique.

As described by Wolf Richter, crony capitalism is an equal opportunity patron. In case the fees and dividends were stripped out by Bain Capital — the outfit started by Mitt Romney, and which retains the deep political ties which have opened the door to billions of institutional money.

These considerations pose an obvious question. Why in the world were there so many retail LBO’s in recent years when anyone could see the scorched earth juggernaut of Amazon barreling down the pike?

After all, it is no secret that during the last decades its sales have grown by 1,100%. And that it has laid waste to whole sections of the retail market in the process of this unprecedented expansion. 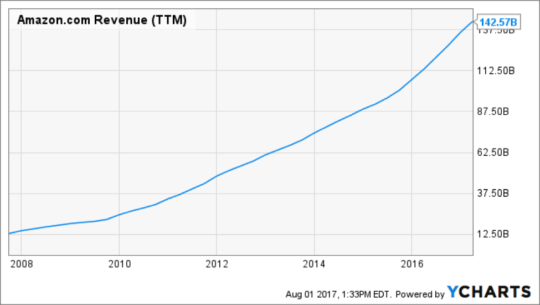 The answer is that the capital markets are deeply and perhaps irreparably broken by the Fed’s massive falsification of financial asset prices. Not only was the Amazon threat well known, but so was the fact that U.S. brick and mortar retail was drastically overbuilt — and mainly because so much cheap debt had flowed into the commercial real estate market.

But there is no way to reconcile that leveraged finance boom with current projection that nearly 30,000 retail stores will close in the coming three years.

The latter is not happening by the economic equivalent of immaculate conception. It has been baked into the cake all along — the inherent consequence of systemic financial repression by central banks.

There is another thing baked into the cake as suggested above. Namely, all this financial engineering has starved the real main street economic for capital investment — even as the cash flows shunted back to Wall Street have showered the fast money operators and gamblers with massive windfalls.

That is, the chart below isn’t a consequence of Reagan/GOP tax cuts. It measures the pre-tax distribution of U.S. income, and the monumental “trickle-up” to the top 1% of households was born and bred in the Eccles Building. 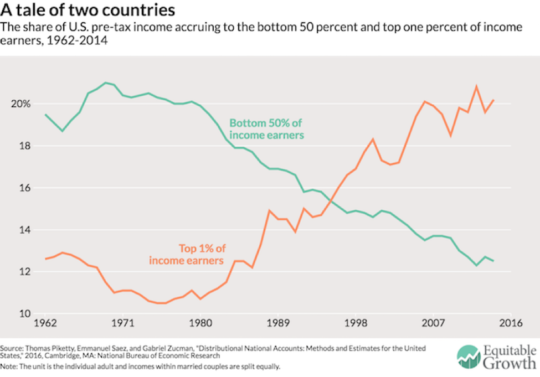 At the end of the day, the retail sector has been hit with a triple whammy owing to monetary central planning. First, the Amazon grim reaper is not an instrument of “creative destruction.” It’s a giant engine of predatory pricing and malinvestment enabled by an unhinged casino that is absurdly valuing its net income at 190X.

Secondly, the resulting prematurely broken economic furniture and deadweight economic loss has been compounded by decades of over-investment in malls and other retail venues. In the face of huge fixed operating and debt costs, the collision of Amazon and these egregiously excessive levels of brick and mortar capacity is pushing retail pricing and margins to sub-economic levels.

That is, negative cash flows are signaling a need for tsunami of bankruptcies, job-layoffs and store liquidations that significantly exceed the fundamentals of the sector.

Finally, the scramble for yield among money managers has fostered the financial liquidation of retail sector equity for the sole purpose of redistributing windfalls to the top of the economic ladder.

Despite all that, Keynesians like Fed Vice-Chairman Fischer are still wondering, unaccountably, why trend economic growth has sunk to the sub-basement of history and why outlaw politicians like the Donald are suddenly arising to disrupt the perfect nirvana of the central planners’ statistical full employment.

Here’s a hint: look at the brick and mortar retail industry.