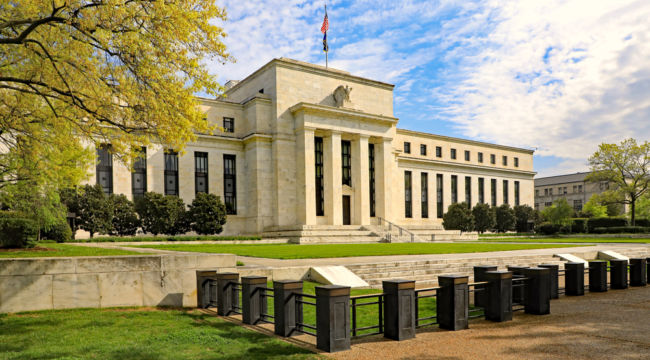 Fed Caught in Its Own Trap

Though it seems like only yesterday, it’s been over a decade now since my former employer, Lehman Brothers went bankrupt, and in the process, helped instigate a massive global financial crisis.

That collapse catapulted the Federal Reserve on a mission to, in its own narrative, save the economy from further collapse. In fact, its creation of $4.5 trillion to purchase U.S. treasury and mortgage related bonds from the big private banks in exchange for continued liquidity was the biggest subsidy in U.S. history.

In some ways, we seem much better off now. The stock market just notched fresh record highs last week and employment is still near record highs.

But that only tells half the story. That’s because the last financial crisis was about debt and debt levels have increased substantially since 2008. The entire “recovery” was built on debt.

Global debt-to-GDP ratios have increased. Companies and governments have piled on more debt than before. Emerging-market debt, led by China, is also at a record. The big banks are even bigger, and remain “too big to fail.”

Now, ten years after the financial crisis, there are major complications building with the deluge of debt created on the back of central bank quantitative easing policy.

Eliminating all that debt is the ultimate solution for avoiding another crisis. But now that the central banks are cutting rates again and making more cheap credit, or “dark money” available, the problem’s only getting bigger.

Now the Fed’s been pumping in hundreds of billions of dollars to prop up the “repo” market. But the bulk of this money hasn’t gone to commercial banks that might use it to loan to businesses or to purchase housing. Instead, most of the money’s gone to brokerage firms and investment banks that use it to gamble in the markets.

Is it a coincidence that the stock market’s back to record heights again? But last week Fed chairman Jerome Powell appeared before Congress, where he said these were just routine “open market operations” and basically, that there’s nothing to see here.

But the last time the Fed conducted these “open market operations” was during the financial crisis. Hardly routine. But that’s the big lie the Fed’s pushing.

The Fed’s latest interventions are also raising renewed concerns about moral hazard, where market participants take on greater risk in the expectation that the Fed will bail them out if things go bad. And that’s dangerous.

When the next shoe drops from our inflated bubble markets, it will be the debt markets that lead the way.

Corporate debt is the biggest potential flash point. Spurred on by the Fed’s artificially low interest rates, corporations have been on a borrowing spree, using the money to splurge on stock buybacks that increase their share prices while doing little to increase productivity.

Loans to companies with large amounts of outstanding debt, known as leveraged lending, grew 20% last year alone. The growing corporate debt problem has even prompted the Federal Reserve to identify it as a potential risk to the financial system.

The share of new, large loans that have been going to comparatively risky borrowers exceeds peak levels reached previously in 2007 and 2014.

Maybe the most dangerous trend is the growth of collateralized debt obligations (CLOs).

These are much like the “collateralized debt obligations” (CDOs), which helped bring the financial system to the point of collapse in 2008. But instead of repackaging mortgages, CLOs repackage corporate loans, as well as consumer credit like auto loans.

But they could be even more dangerous than CDOs, as former banker Satyajit Das reports:

Relative to mortgages, [CLOs] typically are made up of fewer and larger loans, which increases concentration risk. Leveraged loans are highly sensitive to economic conditions and defaults may be correlated, with many loans experiencing problems simultaneously.

If firms begin having problems with debt repayment, a huge wave of defaults could result, followed by crisis as defaults spread like a contagion.

No two crises are exactly the same, so whatever form it takes, it won’t be identical to 2008. But you can bet the Fed will respond with more rate cuts and quantitative easing.

I call it dark money, and it flows into the financial system to boost assets.

“Dark money” comes from central banks. In essence, central banks “print” money or electronically fabricate money by buying bonds or stocks. They use other tools like adjusting interest rate policy and currency agreements with other central banks to pump liquidity into the financial system.

As I’ve said many times, dark money is the #1 secret life force of today’s rigged financial markets. It drives whole markets up and down. It’s the reason for today’s financial bubbles.

But here’s the problem: the main difference between 2008 and now is that central bank sheets are dramatically higher today.

The central banks just don’t have the room to accommodate nearly as much easing this time around, as opposed to 2008. They’ve spent too much of their “dry powder” trying to repair the last crisis, and there’s a limit to how much they can expand their balance sheets (although in fairness, no one can really say what limit is).

One of my former employers, J.P. Morgan Chase, says the next crisis may become so serious “that the next financial crash may be so cataclysmic that the Federal Reserve may have to enter the market to buy up stocks…”

Think about what that means. JPM has spent tens of billions of dollars over the past several years buying back its own stock to boost the price. Now they want the Fed to directly bail out the stock  market next time around — and JP Morgan stock by implication.

Call it whatever you want, just don’t call it the free market. You can call it welfare for Wall Street instead.