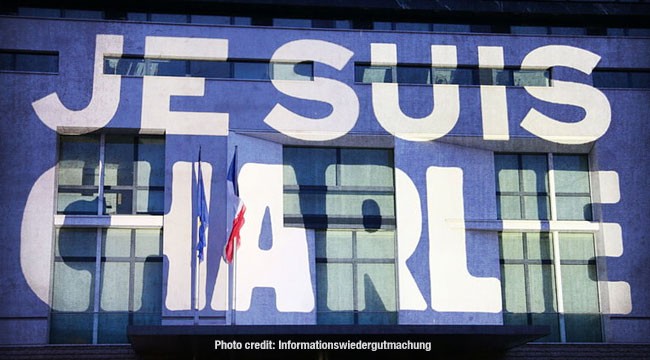 Fear and Loathing in Paris

Paris looked like a city under siege when we went through it on Saturday.

Helicopters overhead. Gendarmes everywhere. Fear and loathing down every rue.

Even with the diminutive François Hollande at its head, the French government seemed suddenly robust – its muscles flexed, its cheeks rosy and flush with energy and purpose.

“War is the health of the state,” said American writer Randolph Bourne.

“Compare what these Islamic commandos did to Charlie Hebdo and what your Navy SEAL team did to Osama bin Laden,” suggested a provocative Frenchman.

“Both were trained to kill. Both killed unarmed people in the name of their cause. Bin Laden had been accused of a serious crime. But no trial was ever held. No verdict ever rendered.

“The cartoonists had been accused of a serious crime, too… at least as the radical Islamists saw it. In both attacks the killers gunned down innocent people who hadn’t been accused of anything.”

“What’s the difference?” he asked. He did not stay for an answer.

We had one: In our Western tradition, making fun of someone is not a capital crime. Plotting the murder of thousands is.

But the man had a point. The perps – the brothers Kouachi – believed in a different tradition… a different set of rules… and a different kind of justice.

Once killing is permitted, people will reach out to others… and blow their brains out.

The Kouachi brothers’ beliefs may be strange, but their plan of action was familiar. It came directly from The Revolutionist’s Handbook.

Their attack aimed to do more than just avenge the mockery of the prophet Mohammed.

There are more than 5 million Muslims in France. Most of them are sensible, law-abiding people. Few take jihad seriously. Murdering high-profile targets was designed to rally these secular Muslims to the cause.

Terror would harden the majority French against them and provoke the government to overreact. The Kouachis must have been hoping that France would declare “war.”

Not only would this give the murderers the dignity of soldiers, it would help radicalize the minority… providing the jihadists with more recruits and more financial support.

The US has been a big help to radical Islam. It was US mistreatment of prisoners at Abu Ghraib that the Kouachis credited with having convinced them to become terrorists.

Bombing, droning, torturing, invading – and killing thousands of innocent people as it throws its weight around – the Pentagon has done its part: creating and arming ISIS, as well as other violent groups.

Now, the terrorists are getting the same cooperation from France.

This is where the worlds of money and geopolitics meet. The link is credit. Without the almost unlimited credit of the post-1971 world, today’s grotesqueries in politics and finance wouldn’t exist.

Excess credit – above and beyond the ratio of credit to GDP that existed up until 1980 – added about $35 trillion to America’s spending power since the 1970s.

This includes the vast “military-industrial complex” that President Eisenhower warned against… and the “foreign entanglements” that Washington, Adams and the founding fathers sought to avoid.