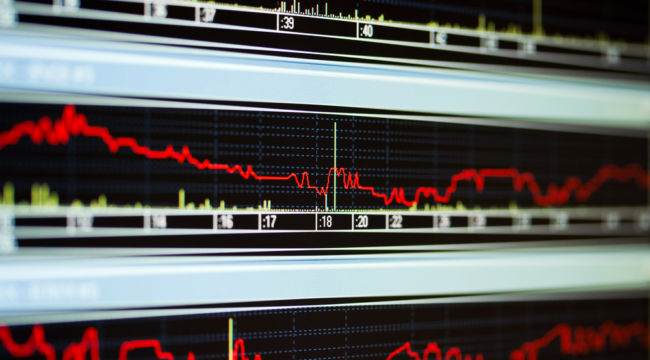 September is officially in swing.

Here in Baltimore, a late-summer heat wave has us in siege… like a fever that won’t let go.

Marketwise, many consider September a calm before dreaded October.

October’s record is so felonious that market observers have fashioned a term for it — the “October effect.”

Today we haul the defendant into the dock… interrogate its record… and announce a verdict.

But let us first look in on today’s proceedings…

Stocks were “mixed” today, as the phrase has it.

The Nasdaq was down 96 points.

There they got a good grilling about foreign election meddling and their efforts against it.

“When you have these corporate executives dragged to Congress,” says Robert Pavlik, chief strategist at SlateStone Wealth, “that makes the market more nervous.”

The S&P was down eight points today… while the Dow Jones worked a 22-point gain.

But returning to the question of the hour… is October the great menace we’ve all been led to believe?

October’s bankrupt reputation appears more a string of sour luck; its conviction based on circumstantial evidence.

In further vindication of October, the folks at Yardeni Research prove the average October market return is a positive 0.4%.

Meantime, Investopedia informs us that more bear markets have ended in October than begun in October.

We must conclude an innocent man has been pitched into infamy… and sent to the gallows on false charges.

But if October isn’t the menace many believe, does another month rise in its place?

“Since the Dow Jones industrial average was created in the late 1890s,” financial columnist Mark Hulbert notes, “September has produced an average loss of 1.1%.

Like the Dow Jones, September’s ill luck covers the S&P.

The results were damning.

The evidence — the damning evidence, smoke billowing from the gun barrel: 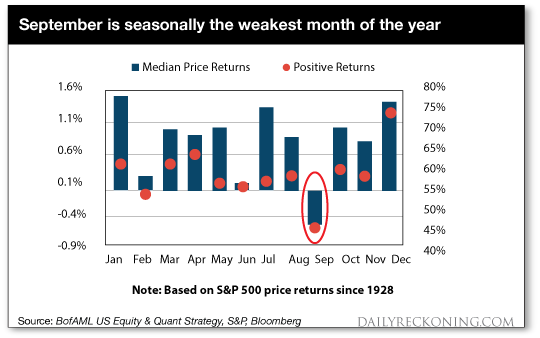 October is a month of honey in comparison.

Perhaps it is time to replace the “October effect” with the more deserving “September effect”?

But no more talk of Septembers past.

What about September present?

After closing August at or near record highs, stocks have entered September with a slight limp.

Of course… we are not one week into the month.

But if history is a reliable barometer, watch out for the next three weeks…

North Korea appears to be playing with firecrackers again.

An emerging-markets crisis issuing out of Turkey remains a possibility.

There are trade wars to consider.

Mix the ingredients and markets are becoming “increasingly fragile,” says our own Nomi Prins:

Given the rise in uneven patterns globally, it is clear that markets are entering an increasingly fragile period. Expect rising volatility this fall to become central to even the mainstream financial media outlets.

Words to the wise, perhaps — for the wise.

Here at The Daily Reckoning, our curiosity is strong… but our commitments weak.

“Sometimes right, sometimes wrong and always in doubt, we just try to connect the dots,” in the words of our co-founder Bill Bonner.

We have even suggested markets could “melt up” from here — before melting down sometime next year or the year after.

We are nonetheless under bonds to remind you…

September is one of the most dangerous months to speculate in stocks.

Along with, as the great scalawag Mark Twain said: