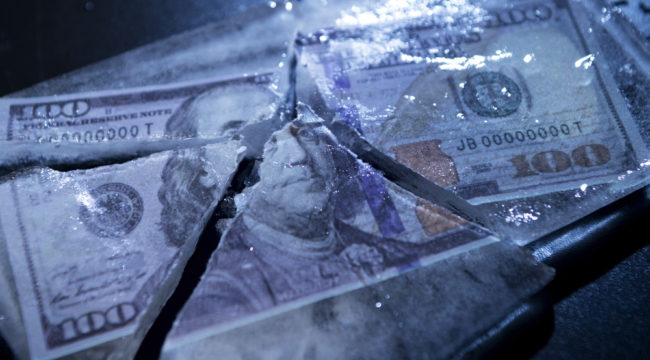 EXPOSED: The Elite’s Plan to Freeze the Financial System

Today’s complacent markets are faced with a number of potentially destabilizing shocks.

Any one of them could potentially lead to another financial crisis. And the next crisis could see draconian measures by governments that most people are not prepared for today.

You’ll see what I mean in a moment.

But first, what are the catalysts that possibly trigger the next financial crisis?

First off, a debt ceiling crisis is just over a month away. If the ceiling isn’t raised by Sept. 29, the federal government is likely to default on at least some of its bills.

If a deal isn’t reached, it could rock markets and possibly trigger a major recession.

Given Washington’s current political paralysis and intense partisan infighting surrounding President Trump, it’s far from certain that a deal will be reached.

Second, despite some official comments over the weekend downplaying the odds of a war with North Korea, a shooting war remains a very real possibility.

North Korea’s Kim is determined to acquire nuclear weapons that can threaten the lower 48 U.S. states, and Trump is equally determined to prevent that from happening.

Third, a trade war between the U.S. and China seems imminent.

Trump has backed off his campaign pledges to label China a currency manipulator and an unequal trading partner.

And today, Trump is expected to present his case for sanctions against China.

China would likely retaliate, and that could ultimately result in a 10–20% “maxi-devaluation” of the yuan, perhaps by early next year.

That would likely cause a stock market rout. Since China devalued in August 2015, markets fell hundreds of points in single sessions. And that was a much smaller devaluation, less than 2%.

And if markets collapse from either of these scenarios — which is entirely possible — governments will move dramatically to contain the damage.

In my book The Road to Ruin, I discuss a phenomenon called “ice-nine.” The name is taken from a novel, Cat’s Cradle, by Kurt Vonnegut.

In the novel, a scientist invents a molecule he calls ice-nine, which is like water but with two differences. The melting temperature is 114.4 degrees Fahrenheit (meaning it’s frozen at room temperature), and whenever ice-nine comes in contact with water, the water turns to ice-nine and freezes.

The ice-nine is kept in three vials. The plot revolves around the potential release of ice-nine into water, which would eventually freeze the rivers and oceans and end all life on Earth. Cat’s Cradle is darkly comedic, and I highly recommend it.

I used ice-nine in my book as a metaphor for financial contagion.

If regulators freeze money market funds in a crisis, depositors will take money from banks. The regulators will then close the banks, but investors will sell stocks and force the exchanges to close and so on.

Eventually, the entire financial system will be frozen solid and investors will have no access to their money.

Some of my readers were skeptical of this scenario. But I researched it carefully and provided solid evidence that this plan is already in place — it’s just not well understood. But the ice-nine plan is now being put into practice.

Consider a recent Reuters article that admitted elites would likely shut down the entire system when the next financial crisis strikes.

The article claimed that the EU is considering actions that would temporarily prevent people from withdrawing money from banks to prevent bank runs.

“The desire is to prevent a bank run, so that when a bank is in a critical situation it is not pushed over the edge,” said one source.

Very few people are aware of these developments. They get a brief mention in the media, if they get mentioned at all. But people could be in for a shock when they try to get their money out of the bank during the next financial crisis.

Think of it as a war on currency or a war on money. Even the skeptics can see how the entire financial system will be frozen solid in the next crisis.

The only solution is to have physical gold, silver and bank notes in private storage. The sooner you put your personal ice-nine protection plan in place, the safer you’ll be.