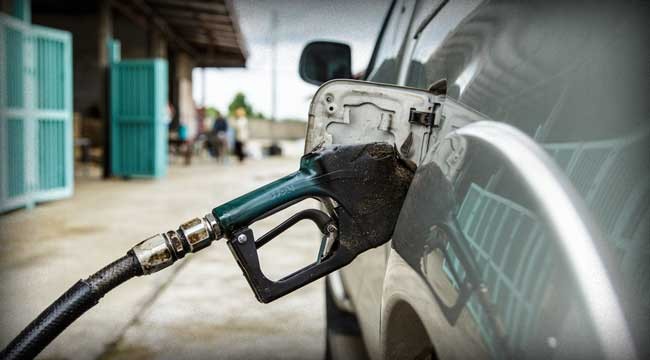 Lately, fuel prices are creeping back up. My recommendation? The U.S. needs to export crude oil.

“Huh,” I can almost hear you asking… “are you, crazy? How does exporting U.S. crude oil help lower prices at the pump?”

Here’s the logic: If global oil prices fall — say due to U.S. crude oil exports — then it’ll translate into lower prices at the pump, too. So let’s look at how exporting oil could actually lower fuel prices for the U.S., as well as the world.

First, understand that you already pay the “world” price for gasoline and diesel fuel at the pump. When you allow for transport costs — tankers, trains, trucks — there’s no real difference between fuel costs in the U.S., Canada, Europe or most other parts of the world. Those famously “high prices” people pay in, say Canada, Japan and Europe are mostly government taxes; the cost of actual fuel is pretty much the same everywhere.

I’ll add that some nations heavily subsidize fuel prices. You’ve heard of 10-cent per gallon gasoline prices in Venezuela, right? It’s a massive government subsidy, to keep the peace. And hey, how’s that low-cost fuel working out down there? The place is a socialist wreck; I’m sure you’ll agree.

Basically though, a gallon of gas or diesel molecules costs the same across the world. Begin with the fact that there are refineries across the world. Pretty much every refinery, everywhere, has the same kind of cost structure, allowing for basic technology, age of equipment, environmental controls, labor costs, etc. The difference is at the margins; but overall, it costs about the same to run a barrel through a refinery in India, South Africa or Texas.

At the same time, it’s fair to say that U.S. refineries are big and efficient. Plus, U.S. motor fuel demand has been on a bumpy plateau over the past few years, due to more and more Baby Boomers driving less as they age, and more fuel-efficient cars rolling off assembly lines. Same thing about fuel demand in Europe and Japan — both places are “ageing” even faster than the U.S.

In fact, for lack of a growing domestic market, U.S. refiners have dramatically increased product exports over the past five years, according to the U.S. Department of Energy. Here’s the chart. 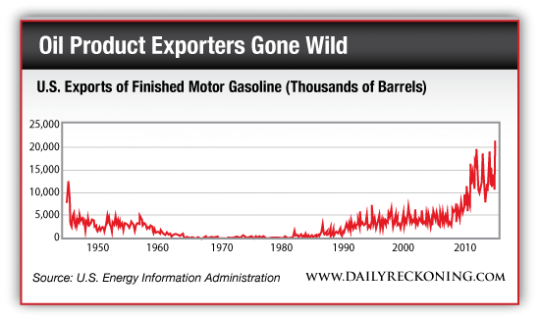 What do you notice about this chart? Well, it sure is similar to the chart of U.S. oil production growth in the past five years or so, with the increase in fracking. 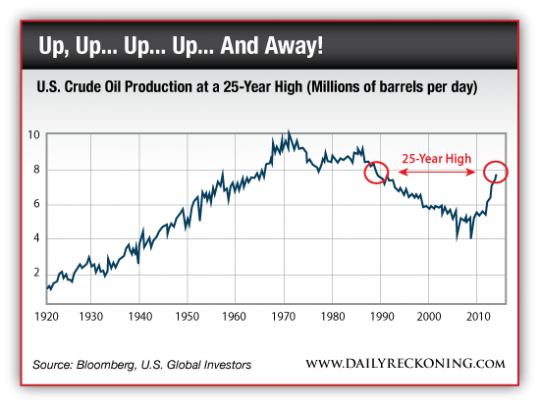 No mere coincidence here, either. What happens to all that “new” U.S. oil from fracking? It’s not like anybody can drink it. No, it goes to refineries and gets processed into gasoline, diesel, lubricants and much else.

For lack of a market in the U.S. — recall, Baby Boomers drive less, and there are better autos on the road — there’s “too much” gasoline and diesel for U.S. domestic demand. Thus extra fuel gets loaded onto tankers, and sails for foreign destinations, mostly in Latin and South America, but also Europe. ‘

Think about this in terms of the U.S. balance of trade. Every barrel of new U.S. oil from fracking displaces an imported barrel from wherever, thus saving the U.S. the price of that barrel — whether it’s $100 per barrel, or $90, $80, $70, etc. Then refiners export a barrel of refined product, and also get paid. In a sense, every barrel of oil more than doubles its value to the U.S. trade balance.

Now let’s look at the price of crude oil; or I should say, two prices for crude oil. Here in the U.S., there’s the West Texas Intermediate (WTI) quote, which is set based on the fact that most U.S. crude is “stranded” inside U.S. borders. In essence, it’s against the law to export crude U.S. crude oil, except under very tight circumstances. That’s why the WTI quote is almost always substantially below the world price of oil.

As for the “world” price of oil, much of it trades based on the North Sea “Brent” quote. There’s a long story about Brent; not here. Then there’s the Dubai quote: again, not here. Or the Urals quote; not here. Suffice to say that the “world” (Brent) quote tends to be higher than WTI.

Thing is, it’s the Brent/world quote that sets the benchmarks for what refiners pay for oil; and thus what they charge for refined products. There’s no escaping it. That is, refiners everywhere — to include the U.S. — are locked into a pricing mechanism that’s based on Brent/world oil prices. The relatively “cheaper” U.S. WTI oil doesn’t flow through to the gas pump.

What does all of this mean to you? Well… it means that WTI oil is always less expensive, relative to Brent/world. So when U.S. refiners buy WTI oil, they pay a lower price. Yet when refiners sell their product, it’s at the “world” price.

Refiners capture a profit that economists call “rent,” and you pay that at the pump. It’s coming out of your wallet, if not your hide.

In other words, refiners capture a profit that economists call “rent,” and you pay that at the pump. It’s coming out of your wallet, if not your hide.

So what if the U.S. would export crude oil? U.S. oil would flow into world commerce, and help push the “world” price of oil down. Or at least, keep the world price of oil from moving upwards by so much. Prices move up and down, after all.

But won’t U.S. oil exports mean that U.S. refiners have less oil to refine? Not necessarily; because U.S. refineries are geared to refine heavy grades of crude, such as the U.S. imported for much of the past 45 years.

The problem for many refiners is that much new U.S. oil, from fracking, is too light to run in most U.S. refineries. Thus, U.S. refineries still import foreign oil, such as heavy crude from Venezuela; or Canadian oil from oil sands. Then it all gets blended into the light oil from fracking.

Right now, there’s a glut of light crude oil on U.S. markets, due to fracking. It’s a logistical mess to refine it all in U.S. refineries; yet there’s a strong foreign market for light U.S. crude oil, if only the U.S. government would allow that.

All in all, the U.S. should make it easier for oil drillers and operators to export crude oil. U.S. refiners would still have plenty of crude to refine. The glut of light oil would move overseas into friendly markets. Lower world oil prices would re-set refined product prices lower.

You’d likely notice it at the pump.