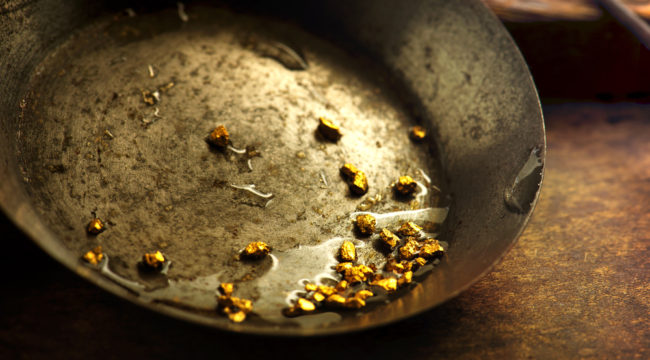 Cracks are now visible in the central banks’ wall of deceit. Trillions of dollars of bonds now trade at negative yields. Helicopter money is in the cards. People the world over now sense the jig is up. So one important question hangs in the air:

Will there be enough gold to match exploding demand?

We have it on good authority that the world is fast approaching a “gold production cliff.” Supplies are drying up. So… Has the world reached peak gold? And what does it spell for gold prices? Consider…

The crackerjack analysts at Sprott Asset Management say global gold discoveries peaked in the mid-1990s. And gold production hit a new all-time record in 2015 — for the seventh consecutive year. But Sprott says 2015 could go down as the year global gold production maxed.

The timing makes sense. It can take 20 years to haul up the first ounce of gold after initial discovery. (Funding, oceans of red tape, a spotted owl might live within 99 miles of the mine, etc.)

But all that gold production over the past 20 years has left the cupboards bare. Gold producers just haven’t found the big deposits in recent years, even though Sprott says exploration budgets increased 250% between 2009 and 2012.

Charles Jeannes, former CEO of Goldcorp, confirms it: “There are just not that many new mines being found and developed.”

According to Pierre Lassonde, chairman of the gold royalty and streaming company Franco Nevada, the number of “super-giant” discoveries (more than 20 million ounces) has plunged in recent years.

In the 1980s, he says, 14 super-giant deposits were located. Eleven were found in the 1990s. But only two have been discovered in the past eight years. And none in the past five.

Lassonde also says the quality of most recent gold discoveries is second- and third-rate. Ore grades averaged 12 grams per ton in the 1950s. Now they’re only about 3 grams per ton. And he says many gold finds are only yielding one lonesome gram per ton. Never before has so much time and money been spent… by so many producers… to fetch so little gold.

Add it all together and you’re looking at a melt-up in gold prices. Says Kelvin Dushnisky, president of Barrick Gold, “Falling grades and production levels, a lack of new discoveries and extended project development timelines are bullish for the medium- and long-term gold price outlook.”

Jim Rickards has a contact deep within the gold market. He can’t identify him for security reasons, so he refers to him as “Goldfinger.” When Jim met with him in Zurich recently, this fellow says gold shortages are already showing up in the Swiss gold refineries. They’re struggling to find fresh supplies from the mines.

Back to Lassonde. He thinks one thing can save the gold mining industry from the “production cliff”: New technology. Fracking saved the oil and gas industry. He thinks it could one day transform the gold industry. But will it? And when? It’s crickets so far.

In the meantime, major gold producers are using the one card up their sleeve: buyouts of junior miners with proven deposits. That saves the biggies all the time and hassle of hunting for gold themselves. Just buy out the small fry.

Byron King, senior geologist at our own Rickards’ Gold Speculator: “Launching new mining projects — exploration, development and production — requires a lot of time, money and energy. That’s why large miners’ management teams are increasingly looking at small, turnkey projects that they can acquire and then scale.”

That’s also why Sprott says there will likely be a “significant wave of mergers and acquisitions (M&A) within the gold industry,” as reported by MarketWatch.

But none of that avoids the looming “gold production cliff.” It just puts existing gold projects into stronger hands. Again, where will the new gold come from to meet the demand?

These M&As can sure do wonders for select gold stocks in the meantime, though — share prices often trade at multiples to the price of gold itself. And buyout targets can see their stock prices double, triple, practically overnight, once a deal’s announced.

And if gold’s going to $10,000 an ounce as Jim Rickards predicts… for some of these companies… well…