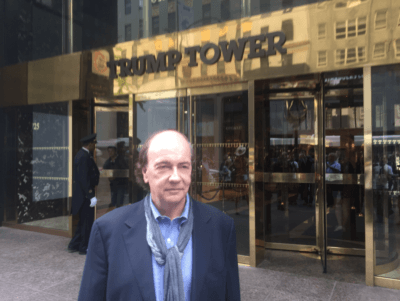 The past few days have been a mix of the expected and unexpected. On Wednesday afternoon, the Federal Open Market Committee (FOMC) of the Federal Reserve voted to keep its target interest rate unchanged, but also signaled that they will raise rates at the December FOMC meeting.

Both moves were entirely expected and in line with what I advised my readers weeks ago.

The Fed will raise rates in December — I’ve been saying that for a long time. Now market expectations have caught up and the coast is clear for the Fed actually to do so.

Some commentators have suggested that a surprise Trump victory in the Nov. 8 election might throw the Fed off its expected path, but it won’t.

It is true that a Trump victory may cause stocks to decline 10% overnight. But when I discussed this at a recent dinner with Bill Dudley, president of the Federal Reserve Bank of New York, he said “it’s not our job” to prop up the stock market.

He also said he doubted there was much of a link between last December’s rate hike and the sharp sell-off in stocks in January 2016.

Apart from the election, all other stars seem aligned for a rate hike. The IMF gave the Fed a green light in terms of emerging-market expectations. Persistently dovish voices such as Charles Evans of the Chicago Fed and Lael Brainard, a Fed governor, have either been supportive of a rate hike or have remained silent lately.

The only thing that could throw the Fed off this path would be if a 10% stock market correction from a Trump win turned into a 15% or 20% collapse with global contagion. However, I expect that once the 10% correction is over, investors will take a second look at Trump’s policies of low taxes, less regulation and big infrastructure spending and like what they see. This means stocks may stage a post-election rebound soon after any correction.

But for now, a December rate hike is in the cards and almost nothing can stop it.

The next thing I want to address is the unexpected speed with which markets are adjusting to the rise of Donald Trump.

Now, what was unexpected was the speed with which markets are adjusting to the rise of Donald Trump.

Everyone has his or her personal opinion on Trump versus Clinton. If it were just a matter of political views, I would not have to write about it. But the Trump-Clinton election will have a major market impact also, which investors need to watch closely.

I advised my readers weeks ago that markets were in for a shock if Trump wins the election. Markets were fully priced for a Clinton victory and would have to adjust violently to the prospect of a Trump victory.

I expected this re-pricing to be compressed in a short window around Election Day from late on Nov. 8 through the early hours of Nov. 9. I expected stocks to fall 10% and gold to rise over $100 per ounce.

This process has started, but it is happening in stages over a matter of days, rather than all at once on Nov. 8.

Since last Friday, stocks are down 1.6% and gold is up $40 per ounce. This is because of FBI leaks and substantial momentum toward Trump. While the market adjustment to a Trump victory has begun, it is far from over. Stocks have another 8% to fall, and gold is poised to rise another $60 per ounce or more between now and next Wednesday.

My expectation is that Trump will win the election on Nov. 8. However, that forecast is a close call. The election will be close, and Clinton could win despite my expectation.

If the polls are close, the S&P should trade around 2,050, but that’s not what’s going on. The S&P is fully priced for a Clinton victory. That means that if Clinton wins, there will be little or no market reaction, but if Trump wins, the stock market will hit an air pocket and plunge 10%, to 1,950, overnight.

Are you ready for an instantaneous 10% wipeout in your equity portfolio? If not, you should get ready, because that could happen.

If Clinton wins, you can reverse those allocations at low cost. If Trump wins, you’ll make huge profits or avoid huge losses. This is setting up like “Brexit,” where markets were fully priced for “Remain” and hit an air pocket when “Leave” won. Markets and betting odds are not a good reflection of the actual state of play.

If the actual odds of a Trump victory are just better than even money, and markets are priced for sure thing Clinton victory, then we are set up for one of the greatest asymmetric trading opportunities of all time — even better than Brexit.

I use “asymmetric” to describe an opportunity where the outcome may be uncertain but the risk/reward ratio is entirely in your favor. In other words, it’s “heads you win, tails you don’t lose.”

The last time we saw this was June 23, 2016, during the Brexit referendum in the U.K. Voters had to decide whether to “Remain” in or “Leave” the EU. Markets had fully priced in a Remain victory, but Leave actually won. I saw the mispricing in advance and advised my readers to bet on Leave. Those who did so had instantaneous profits when Leave won and markets violently repriced gold and sterling in favor of my readers.

Gold, for example, has been priced for a Hillary Clinton victory. Gold fell from $1,350 per ounce in early September to around $1,250 per ounce in mid-October based on market perceptions of a Fed rate hike later this year. That was a fundamental move and is easily explained based on changed perceptions of Fed behavior.

A Clinton victory means more of the same in terms of policy and appointments. If she wins, nothing changes; the price will stay about where it is.

However, if Donald Trump wins it will be a shock of unprecedented proportions. Gold could spike $100 per ounce overnight to around $1,400 per ounce based on momentum. If you buy gold, you benefit from this asymmetry. If Clinton wins, you lose little or nothing, but if Trump wins you win big.

I should add, though, that the market is starting to wake up to this opportunity that I’ve been writing about for several weeks. Gold has rallied from $1,250 per ounce to over $1,300 per ounce in the past two weeks. In other words, gold is starting to smell a Trump victory.

You can bet on a Trump victory with a variety of very specific trades. But here’s the thing: If Clinton wins, you won’t lose much, if anything, because markets are priced for that. And if Trump wins, you win big because markets will have to instantaneously reprice for an unexpected outcome.

That’s not just my opinion. MIT professor Simon Johnson, former chief economist for the IMF, agrees with me.

Johnson is a member in good standing of the global monetary elite. He says, “If investors are wrong and Trump wins, we should expect a big markdown in expected future earnings for a wide range of stocks — and a likely crash in the broader market.”

I agree, but I have no intention of being on the wrong side of that trade. You should prepare for a Trump victory now, because it’s not nearly the long shot that the mainstream media have been saying it is.

This presents a rare opportunity to make a one-sided trade (in your favor). But the opportunity is fading fast. You cannot wait until Wednesday morning to watch for these results. By then, the market will have already reacted and you’ll have missed out.

The time to take action is now.