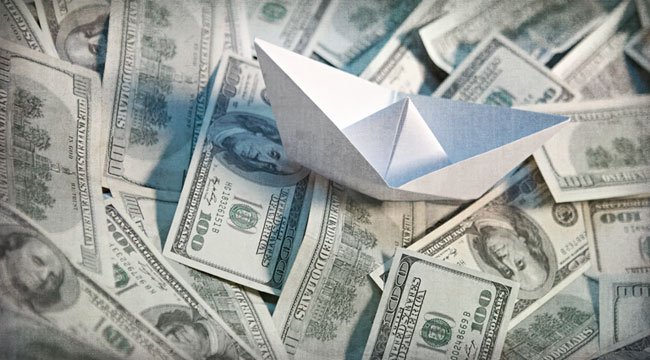 The liquidity gauge becomes a useful tool for investors when it is used to forecast future levels of liquidity.

That is not the full story, however. The Fed was not the only central bank creating fiat money and buying dollar assets last year. In order to prevent their currencies from appreciating, many central banks around the world created their own money and used it to buy the dollars entering their economies as a result of their trade surpluses with the United States.

Once they had acquired the dollars, they invested them in US dollar assets to earn a return. This, then, was a second source of liquidity. It can be measured by the increase in foreign exchange reserves. In 2013, foreign exchange reserves increased by approximately $700 billion. Roughly 60% of those reserves were US dollars. This second source of liquidity thus added another $420 billion or so to US liquidity, bringing total liquidity to $1.42 trillion and excess liquidity to $740 billion.

When total liquidity (i.e. Quantitative Easing combined with the amount of dollars accumulated as foreign exchange reserves) is larger than the budget deficit, there is excess liquidity and asset prices tend to rise. But when total liquidity is less than the budget deficit, there is a liquidity drain and asset prices tend to fall. The $740 billion of excess liquidity in 2013 was the most ever recorded. That explains why the stock market rose nearly 30% and why home prices rebounded by 13%.

The liquidity gauge becomes a useful tool for investors when it is used to forecast future levels of liquidity. That is also relatively easy to do. The Congressional Budget Office publishes its projections for the budget deficit and the Fed has provided a tentative taper schedule that provides estimates of how much fiat money it will create each month during 2014.

Plugging in estimates for the budget deficit, the Fed’s taper schedule and estimates for the current account deficit on a quarter by quarter basis for 2014 suggests that liquidity will remain excessive during the first half of the year, but that a liquidity drain will begin in the third quarter and become significantly worse in the fourth quarter. If this analysis is correct, asset prices are likely to fall during the second half – unless the Fed provides more Quantitative Easing than it is currently signaling.

Given that the Fed has been driving the economic recovery by inflating the price of stocks and property, it is unlikely to allow falling asset prices to drag the economy back down any time soon. To prevent that from happening, it looks as though the Fed will have to extend QE into 2015 and perhaps significantly beyond.

For a detailed explanation of how I calculate the Liquidity Gauge, please subscribe to my quarterly video newsletter Macro Watch. I’ve created a coupon code for you as a Daily Reckoning reader — simply enter the coupon “daily” to receive a 50% discount.

Ed. Note: Richard was one of the “big three” speaking this past week at the World War D conference in Melbourne, Australia – a compendium of information on currency wars and the overall condition of the global financial system. Readers of The Daily Reckoning were given a front-row seat during the entire conference, not to mention a chance to grab all the specific information from the conference, even if they weren’t able to make the trip. Just a small benefit of being a Daily Reckoning email subscriber. Sign up for FREE, right here, and never miss another great opportunity like this.