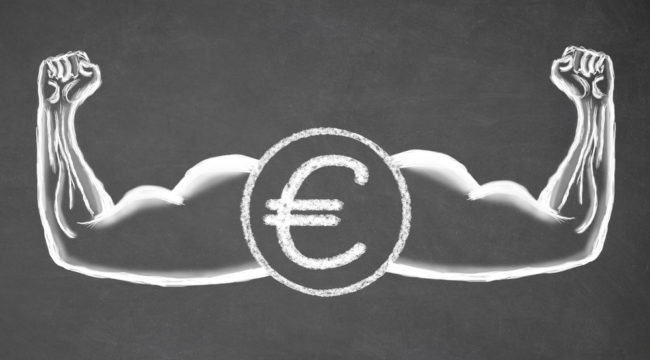 The Euro Is Stronger Than You Think

The euro is the currency of the largest economy in the world, but it gets little respect.

The break-up of the Eurozone (those EU countries that use the euro as their currency), and the collapse of the euro have been predicted repeatedly since 2009 by prominent U.S. economists Paul Krugman, Joe Stiglitz, (Krugman and Stiglitz are both winners of the Nobel Prize), Nouriel Roubini, and others, as well as European public intellectuals such as Anatole Kaletsky, Howard Davies, and many lesser lights.

I’ve been on the other side of that debate the entire time. My view is the euro is here to stay, and will grow stronger in the years ahead.

The evidence backs me up. Since the European sovereign debt crisis emerged in early 2010, not a single member country has left the euro, and three new member countries (Estonia, Latvia, and Lithuania) have been added. This brings the total to 19 member countries. I expect other countries will join in the years ahead, including Scotland, Croatia, and the Czech Republic.

After yesterday’s opening round of French elections, the euro is now at $1.0852 — and it has never fallen below $1.0385 on seven dips in the past two years. Analysts have repeatedly said the euro will “go to par” (meaning a EUR/USD cross rate of $1.00 or less).

Over two years ago, on Bloomberg TV with my friend Trish Regan I predicted the euro would not go to par.

Trish and her co-host Matt Miller were both incredulous in that 2015 interview, but I was right. The euro bounced off a low of $1.04 about a month later and rose to $1.16 five months after that, a nearly 12% gain for a currency the world had given up for dead.

As I said, the euro don’t get respect. But, investors who look past the negative publicity can reap huge gains as the euro positions itself for a major rally starting this summer.

The current low in the euro is an excellent entry point for huge profits in the months ahead.

Why is the euro consistently disparaged and denigrated by analysts who should know better? Why doesn’t the euro get respect?

The answer is cognitive bias. U.S. analysts in particular receive a lot of their information about “Europe” from UK sources, especially the London-based publications Economist and Financial Times.

Those publications have opposed the euro for decades and continually denigrate the European project consisting of the EU, the Eurozone, the euro, and their predecessors. Americans lean on London because of the language and travel barriers of consulting German, Greek or other continental sources. Still, this distorts their views.

The most persistent criticism of the euro is that the Eurozone lacks a unified fiscal policy to go with its unified monetary policy under European Central Bank (ECB) direction. Of course, this is true but it misses the point.

The founders of the euro knew that a unified fiscal policy would be needed, but that was too much too soon to ask of European voters in the 1990s when the Maastricht Treaty on the EU, which led to the creation of the euro, was ratified.

The EU is pursuing a number of initiatives consistent with the idea of More Europe. These include unified banking regulation, unified bank deposit insurance, and unified application of the new “bail-in” rules to replace bank bailouts as mandated by the G20 at their meeting in Brisbane, Australia in November 2014.

All of these policies combined with movement toward unified fiscal policy, eurobonds, and hard ceilings on deficits and debt-to-GDP ratios will strengthen the EU, contrary to the catcalls from critics.

Your correspondent near the Eiffel Tower in Paris (left), and the Brandenburg Gate in Berlin (right) during recent visits.

The second analytical failure of the euro-bashers is to confuse the unpopularity of the bureaucrats in Brussels with citizens’ views on the euro itself. Of course the polls show that citizens despise bureaucrats. It’s like asking Americans what they think of the Washington bureaucracy or Congress. They can’t stand it!

But, when you ask about the popularity of the euro itself a different answer emerges. Citizens of Eurozone countries strongly support the euro.

Even at the height of the Greek debt crisis in 2015, polls consistently showed 60% of the Greek people favored the euro. The reason is clear. Europeans remember the bad old days of the Greek drachma, Italian lira, and Spanish peseta. Those currencies were subject to continual inflation that robbed savers and retirees of their purchasing power. The euro is considered a safe haven from government efforts to steal wealth through inflation.

Another perceived threat to the euro is the rise of nationalism in Europe. The rise is real, but the implications are not as dire as feared. The UK Brexit vote was not about leaving the euro — it was about leaving the EU. The UK never joined the euro in the first place; they stayed with the British pound. Nationalist Gert Wilders did show strength in the recent Netherlands elections, but not enough to form a government.

Yesterday was round one of the next big test of nationalist tendencies in Europe. The independent centrist candidate Emmanuel Macron and nationalist candidate Marine Le Pen were the top two vote winners in the first round of the French election. Macron edged out Le Pen, getting 23.8% of the vote to her 21.5%.

The second round comes on May 7. Voters from four of the five major parties opposing Le Pen will likely unify around Macron, making him the likely winner in the May 7 final round.

Even if Le Pen were to win the second round and call for a referendum on the EU, the so-called “Frexit,” it is likely French voters will stick with the EU and the euro despite Le Pen’s presidency. (The nationalist surge in Europe is more about immigration than the euro, which remains popular).

The most important election this year is in Germany where a new Chancellor will be selected on September 24. This race will be close, but my expectation is that Angela Merkel will hang on to her position as Chancellor. Either way, there’s no threat to the euro. The leading candidate behind Merkel is a Socialist who also favors the euro.

The bottom line is that nationalism is an important trend in European politics and deserves close attention. But, it is no threat to the euro in the near-to-intermediate term.

Finally, analysts should not dismiss the size, strength and resilience of the EU. United Nations rankings show the EU as the largest economy in the world with a GDP of $18.5 trillion, slightly ahead of the U.S. at $18.0 trillion. (IMF and World Bank rankings show the EU in second place, close behind the U.S.)

The population of the EU is about 508 million; significantly larger than the U.S. at about 310 million. The members of the Eurozone collectively hold about 10,000 tons of gold — more than the U.S., which has about 8,100 tons of gold.

Thinking of the EU and Eurozone as a gaggle of separate small countries, some of which have serious economic dislocations, produces a distorted view of the strength of the euro. When population, GDP, gold, and other metrics are viewed in the aggregate, what emerges is a formidable competitor to the U.S., Japan, or China as a leading global economic power.

This view is borne out by the fact that China is increasing its direct foreign investment in Europe, and continues to hold a significant portion of its foreign exchange reserves in euro even as it reduces its holdings of U.S. Treasuries.

So what’s next for the euro?

Among the most important factors are monetary conditions in the U.S. The EUR/USD cross-rate is affected as much by Fed dollar policy as the ECB’s euro policies.

The Federal Reserve is on a clear-cut monetary tightening path. Meanwhile the ECB continues with “Euro-QE,” negative interest rates, and other policies designed to weaken the euro, import inflation, and give the EU economy a boost. That ECB policy, along with political uncertainty, accounts for the currently weak euro.

But, this is all about to turn on a dime. The Fed is tightening into weakness and is dangerously close to putting the U.S. economy into a recession. The Fed will realize this by summer, but by then the damage will be done. We look for the Fed to flip-flop and move to easing through “forward guidance” by July.

This will weaken the dollar and give the euro a boost.

Likewise, the ECB’s easy money policy is about to reverse. Inflation has begun to emerge in Germany and elsewhere in the Eurozone. German voters will not tolerate inflation and will reject Angela Merkel if it goes much further.

The head of the ECB, Mario Draghi, counts on support from Merkel to make hard decisions about bailouts in Greece and purchases of Eurozone member bonds.

When push comes to shove, Draghi will tighten policy by July just in time to improve Merkel’s election changes in September.

This is how central banks and governments work hand-in-glove behind the scenes.

And don’t bet against the euro.