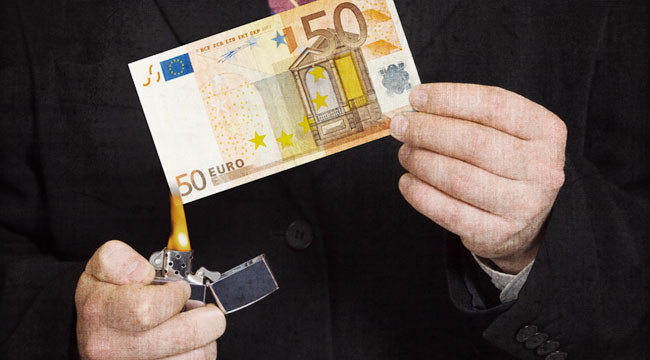 It may be hard to believe, but the European banking system is in worse shape than it was in 2008.

Nonperforming loans, or NPLs, are loans for which a bank has not received a scheduled payment for at least 90 days. These are the deadbeats, in other words. Well, European banks hold 1.2 trillion euros worth of NPLs — that’s double what they reported in 2008.

Banks have to get rid of these loans. There are new rules taking effect next year, called Basel III. They tighten every year through 2018. To meet these hurdles, the banks must clean up their books. This means they have to sell a bunch of assets. And they are selling them at deep discounts.

You want to be a buyer of these assets.

The “smart money” is all over this idea and has been for at least two years. Blackstone, Apollo and other private equity firms have raised billions to buy distressed loan portfolios from European banks.

The reason you want to be a buyer is because the banks will sell these assets at discounts to the face value of the notes. For real estate loans, the discount varies greatly, depending on where the property is and other details. See the chart below to get a sense for the discounts on deals that already closed in the last two years. 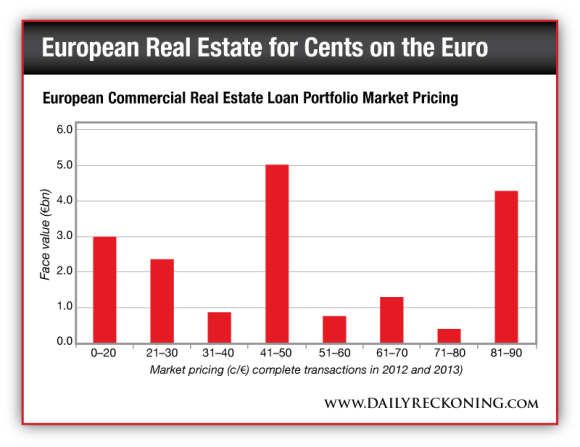 That chart shows you what investors paid. The tallest tower is in the 41-50 cents per euro range. Meaning, the buyers paid 41-50% of the face value of the mortgage. The discounts have largely held over the past few years. It’s not as if the discounts are going away.

Maybe it’s 70% leased. It didn’t work with a $7.5 million mortgage. The owner couldn’t make the payments. But now you come in at $3.75 million. And say you put $2.5 million of debt on it. The property works now. You pencil it out and figure you’ll earn a 12% cash-on-cash return in the first year. And you own the property, with a chance to boost occupancy over time. In a few years, you could double your investment as the property value recovers.

This is exactly what private equity firms did in the aftermath of the crisis in the U.S. It’s taken longer in Europe, but it’s happening.

Two years ago, I called it “the biggest fire sale in history.” Here was my perspective at the time:

This fire sale is your opportunity. There is no better, more-reliable way to make money than to buy something from someone who has to sell. Bankers are the best people in the world to buy from. Believe me, I know.

I was a vice president of corporate banking for 10 years before I started writing newsletters in 2004. I would get at least three or four requests every year from some investor group asking if we had any assets we were looking to unload. Why? Because they know banks are stupid sellers.

I once had a big real estate deal go bad on me. But I knew I was covered by good collateral twice over. You’d never know it based on the pressure I got to get rid of the thing once the borrower stopped paying and the bank took the asset. I knew, given a little time, I could sell the property and make a bundle for the bank. But the folks at the top didn’t want to hear it. They wanted that bad loan gone. They wanted to wipe it off the books fast.

So I sold it quickly, basically at fire-sale prices. It was still the most-profitable loan the bank made that year, because I got a price a good 35% above the loan amount. But the group I sold it to — which could’ve been more patient in marketing the property – flipped it again and made an easy 50% above that. The bank left a lot of money on the table and knew it — and didn’t care.

But institutionally, banks can’t really hold bad debts for long. As soon as they report a big bad debt on a quarterly financial statement, some annoying things happen. It means they have to put aside more capital for this particular loan, which they hate to do, as it lowers profitability and requires a lot of paperwork. It can raise the attention of regulators, which banks hate. It can raise shareholder suspicions about lending practices, which banks hate. So the usual way to deal with bad debts is to clear ’em out as fast as possible. (Unless you’re swamped with bad debts in a full-blown crisis, in which case you try to bleed them out and buy time to earn your way out, and/or patch them up as best you can to keep up appearances while you pray for a miracle — or a bailout.)

Two years on, my bankers-are-stupid-sellers theory has been proven correct. Even better, my recommendation on the fire-sale theme has nearly doubled since — but incredibly, the opportunity ahead of it is bigger still. Astonishing as it sounds, the idea is timelier today. After two years of foot-dragging by the banks, the fire sale is only really beginning in earnest now.

“Asset sales by banks have absolutely accelerated,” according to David Abrams, who manages 3.9 billion euros in European debt for the private equity firm Apollo. “We’re five years into the crisis, but it’s just the beginning of the disposition process.”

And Marc Lasry of Avenue Capital, which invests more than $8 billion in distressed loans, says in a Bloomberg story that “bank after bank” has been offering his firm assets for sale.

I could dig up many more such quotes and anecdotes. The key point is the pace is picking up.

PwC estimates that when the books close on 2013, we’ll have a new record of asset sales by European banks. Yet as I pointed out, the mountain of NPLs is bigger now than ever. Take a look at the below chart, “There Are Still Huge Piles of Bad Debt in Europe.” 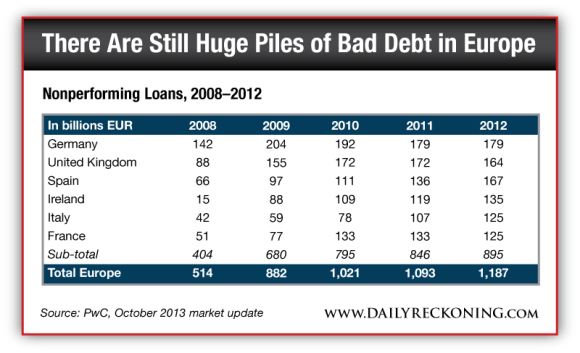 This mountain is (once again) your opportunity.

P.S. Right now, there aren’t too many options for retail investors to participate in the EU fire sale — unless you have access to private equity funds. You could always buy Blackstone or Apollo, both publicly traded, but they do many other things besides this. It’s kind of like buying GE for the light bulbs. I do have a specific recommendation… one that I think could increase more than 25% in the next few months. And in today’s Daily Reckoning email edition, I gave readers a chance to discover what it was. Don’t miss out on another incredible opportunity like this one. Sign up for the FREE Daily Reckoning email edition, right here.