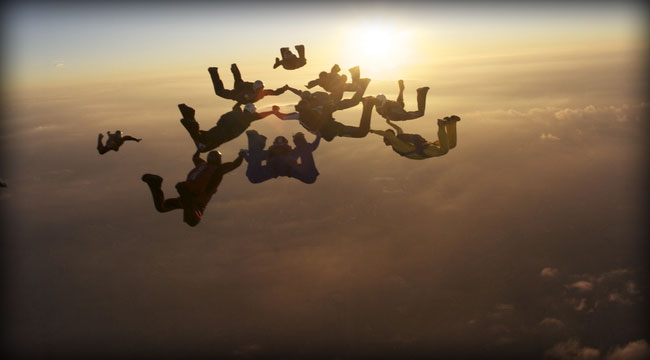 Enough Money to Live Until We Die

What is our biggest fear? Embarrassment? Death? Public speaking?

According to an Allianz Life Insurance poll, the greatest fear of older Americans is outlasting their savings. We fear living longer than our bank accounts by a margin of 22%. 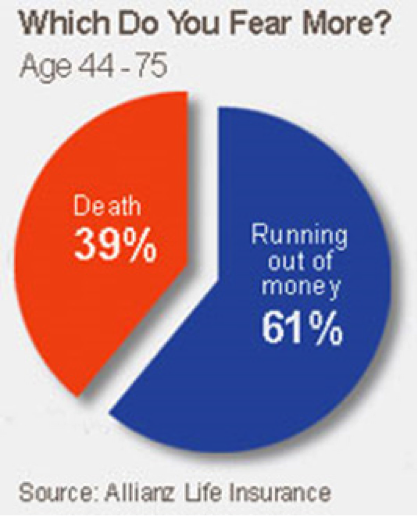 Stephen Pollan has an interesting solution to this problem. In his book Die Broke, he wrote something to the effect of: “The last check you should write should be to the undertaker, and it should bounce!” I wonder if people like that die because they know they are out of money.

Now, I can imagine a couple of ways to follow Pollan’s recommendation. One is to go skydiving, neglect to pull the parachute cord, and pay the skydiving company with a bad check. Or one could go on a massive spending spree, overdraw every account, and stay broke until death. In the latter case, one wouldn’t have to worry about running out of money in the least – you don’t have to worry about losing something you don’t have.

Not too long ago, I was quite pleased when my computer would ding and announce “You’ve got mail!” Now, after spending the day away from the computer, I am not surprised to return to 100 or so messages between the junk mail that makes it through the filters and the emails that actually require my attention.

Like most folks, I’ve developed a system for quickly scanning and prioritizing my inbox. Every day I get a few from my wife Jo (email from a spouse is a high priority for anyone interested in staying married), as she is forever on the lookout for things I might want to share with my readers. One headline Jo sent caught my eye: Running Out of Money Worse Than Death.

The short article published by AARP covered the results of the Allianz poll; while the poll of 3,257 people was taken about three years ago, my guess is the results would be similar today. Let’s take a look at a few of the highlights:

Honestly, this isn’t new news. Seniors and savers can no longer rely on Treasuries or FDIC-insured CDs to pay interest rates that will beat inflation, let alone make them any money. We are all having to put a greater portion of our nest eggs at risk to earn enough to supplement Social Security. But the headline still bothered me… a fear even greater than death?

Nevertheless, I started to pay attention to my closing thoughts at night, and I tried to recall what I dreamed about. I don’t remember ever dreaming about death or worrying about it late at night. On the other hand, I did find myself doing a lot of problem solving during the night, much of it financially related. Perhaps the survey was right; maybe I do worry more about running out of money than I do about dying.

I touched on this subject back in February, and since then two of my good friends have been diagnosed with medical problems for which there is currently no cure. I am amazed at how both friends quickly dealt with the news and set about reassuring their families that they were OK with the situation. One even went so far as to joke that his kids are being particularly nice, because they know he still has enough marbles to change his will if he wanted to. I admire both of these friends a great deal and hope that when my time comes I will handle my swan song with as much grace as they each have.

Then it hit me! And yes, it was actually in the middle of the night. My real problem with the Allianz survey is that I want to live until I die. I want to enjoy life while I’m here. I worked my tail off for many years to accumulate a nice nest egg. I’ve earned more than a few low-stress, worry-free golden years. Worry is for young folks with young families.

My kids roll their eyes when I remind them that in my 20s I worked three jobs and went to school at night… for a decade. The only thing I remember from my 20s was working to feed a young family; I had little time to worry about much else. When we reach our 60s, those stresses should be well in the past.

Nevertheless, just because certain worries should be in the past does not mean they are. Retirees need to figure out a way to not run out of money so they can stop worrying about it, sleep well at night, and enjoy the sort of retirement they imagined.

The fact is, the market has changed: investing is a lot more challenging than it was just a decade ago. If one has a nest egg but is worrying about making it last, he is well ahead of most folks. After all, he had the foresight and discipline to save while he was still in the workforce. Frankly, most of our readers fall into that boat.

As I wrote in my book Retirement Reboot, I was terrified in the fall of 2008. The banks had called in all of our CDs; I had a nest egg but was still in a panic regarding handling it. What should I do with it? Where could I find a good return? How do I know which investments are safe? What is a good allocation for a stock portfolio? I could have filled two pages with my list of fears at the time.

As I look back, the solution was really simple. I needed to learn – a lot. I needed to educate myself on investing and learn about issues I had not focused on during my business career. My goal was to invest my capital, earn good returns, not worry, and keep my fears under control. Most of all, I wanted to live life and enjoy the retirement Jo and I had dreamed about for a couple of decades.

A friend told me years ago that fear is a lack of knowledge. The more you learn and understand about a subject, the less fear you have surrounding it. I agree wholeheartedly. Financial fears will take a terrible toll on many of us if we are not careful. Fear not only affects us financially – often paralyzing us into indecision – it also eats away at our emotions and can even damage our physical health. I for one plan to have fun while I’m here and not worry myself to death.

Dennis Miller
for The Daily Reckoning

Ed. Note: Daily Reckoning email subscribers have regular opportunities to learn specific ways to make a lot of money for their retirement funds. If you haven’t signed up yet, what are you waiting for? Click here now to start getting The Daily Reckoning delivered directly to your email inbox, every day.

Dennis Miller is the author of Miller’s Money Forever and the free journal, Miller’s Money Weekly. Working with Casey Research analysts, Dennis advises subscribers on how to prepare a bulletproof retirement portfolio and ensure having their own money forever.