Employers Lost Their Minds in April

[This post on Employers Lost Their Minds in April is from Lee Adler. To find out more about his work – visit Wall Street Examiner by clicking HERE.]

Federal tax collection data for April was both strong and weak. Withholding taxes showed a massive gain. All other taxes were soft or down.

The big increase in income taxes boosted the US Treasury’s cash holdings, but this will be temporary as tax collections dry up and spending continues. At the same time the US won’t be able to sell new debt as it bumps up against the debt ceiling. Treasury cash should dwindle in May. The government will need to continue to rob internal accounts such as pension funds to pay the bills. Experts suggest that the debt ceiling must be raised by October 2, or the government will default.

Meanwhile, there’s a unified message in the conflicting tax data. Employers have gone into a state of delusional euphoria as the increase hiring well beyond what they need. They are following the stock market, not their sales. Excise taxes, demand for gasoline, and personal income taxes suggest that the economy is weak. Employers are always the last to get the news

What should be strong headline employment numbers should spook the market. It would confirm the idea that the Fed will tighten further this year, particularly by beginning to shrink the assets it holds. That will drain cash from the banking system, put upward pressure on bond yields and downward pressure on stock prices.

That will be exacerbated by an increase in Treasury supply when the debt ceiling is raised. A weak economy will cause deficits to widen and will confuse all market participants, not just investors. Weak economic data has heretofore been a bullish influence. That could begin to be perceived differently if it happens while the Fed is tightening.

Don Trump has spent down the massive cash hoard handed to him by the Obama crime syndicate. For that spending he got a bounce in the market and a surge in the economy. For now the debt ceiling will prevent the Don from increasing spending until a deal is done. He won’t be able to spend an extra hundred billion per month like he did from January 20 to early March. That money is gone.

The stock market and economic bump that grew out of it should also be done. Now the market and the economy must adjust to the return to earth of the February-March rocket in Federal Government spending and Treasury debt paydowns. It will also have to deal with first the thought of Fed tightening, and then the reality.

We have talked about Trump’s spending spree and its impact on the market. Now we are seeing the opposite—a buildup of Treasury cash thanks to April tax receipts.

This time, however, that buildup is not due to increased debt sales. It’s due to the huge wave of taxes collected in April which has yet to be spent. This spike in Treasury cash should be quickly reversed this month but we need to keep an eye on this. If it hangs around this level, then the next move in stocks should be down. 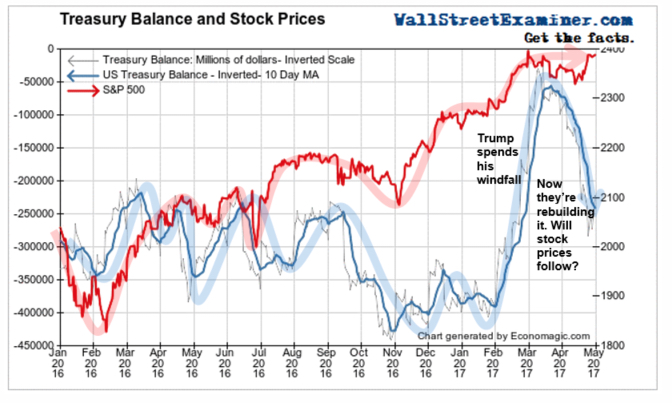 As of May 1, 2017, the Treasury’s cash balance was $222 billion. That was $122 billion less than a year ago (May 2, 2016-first weekday last May). The Treasury has seen a huge haul from tax collections but cash levels remain well below the levels of the past 2 years when the Treasury was building its rainy day fund.

With cash low and the debt ceiling back in place, the Treasury must raid government pension funds and other internal accounts to pay the bills. When that cash runs out is when a deal to raise the debt ceiling can be expected. According to the Washington Post, the Bipartisan Policy Center forecasts the drop dead date as October 2, when the government is required to make a huge once yearly payment to the military retirement trust fund. 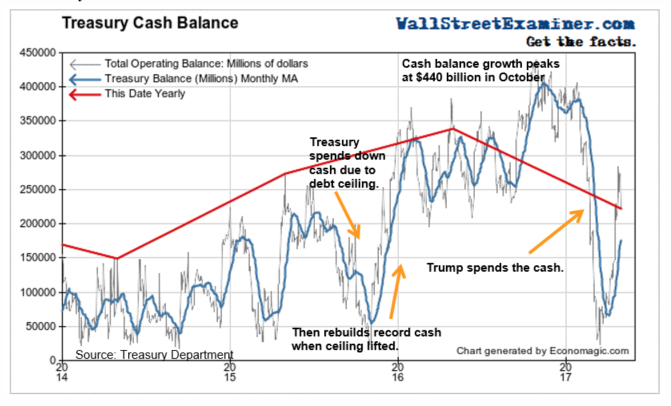 Back in March, withholding tax collections had a spike. With April now in the books, that spike looks like it was the beginning of a new trend heading into the wild blue yonder. It has the earmarks of an economic blowoff following in the wake of Donald Trump’s ascension to the White House. Such giddy behavior by employers is a bad sign. It’s not supported by any strength in final sales, so it’s an irrational euphoria that is unsustainable. It’s based on false hopes that Trump is an economic magician who justifies hiring lots of new workers while demand is weak. 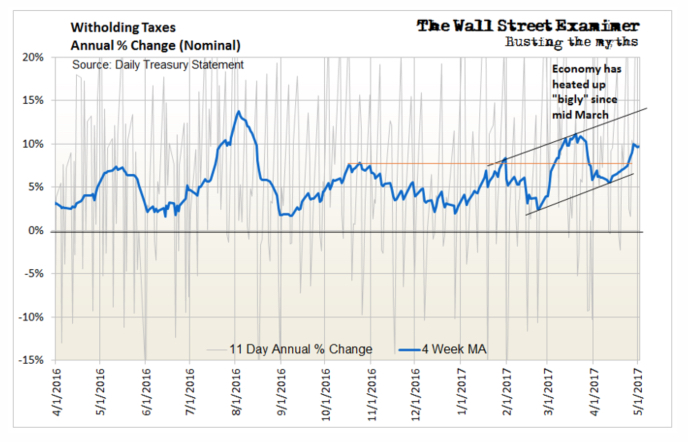 When the economic data starts to reflect this surge in withholding tax collections, possibly beginning with the April jobs data on Friday, it will encourage the Fed to tighten. That’s an opportunity that the Fed didn’t grasp when it refused to raise its target interest rate on Wednesday. But the Fed was partly correct to say that the weak GDP number in Q1 was transitory. They probably already know that a strong jobs number is coming. Whether that later translates to stronger final sales however, is doubtful.

No, strong jobs data will encourage the Fed to move to the real thing—shrinking its assets. As it does so it will withdraw cash from the system. That will be bearish.

In the meantime, until the Fed actually does tighten, the stock market can continue to churn around, a little higher here, a little lower there.