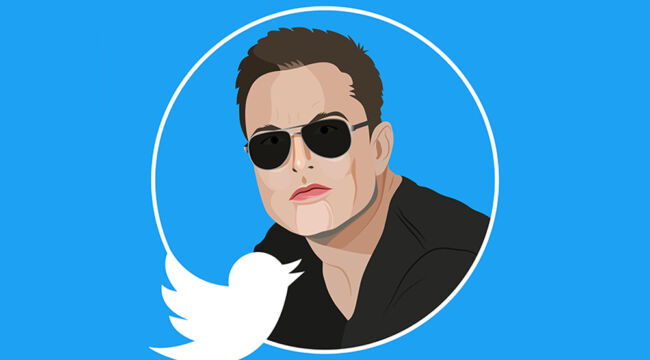 Elon Musk never should have bought the puffed-up and unprofitable site Twitter, which had blown up way beyond its sustainable size due to cheap credit, and certainly not for $44B.

The courts should not have forced this once Elon discovered that the company’s claims for its reach were impossible to verify.

Still, we should be glad it happened as it did. By buying Twitter, Musk has not only set the site on a course to end the bans and censorship. What this really does is smash the Big Tech cartel that has become nothing but an agent of the national security state, spying and ratting people out and enforcing government propaganda priorities.

Elon is now an official enemy of the state.

It’s not clear that he wanted to become that but he somehow could not let go of his common sense. When the lockdowns came, he pulled up his factory and moved to Texas. That’s how fast he moves. He fears not being agile or taking risks.

That’s how his mom raised him and how he became the richest man in America.

I was watching one of those ridiculous presidential press conferences the other day and the reporters were, as usual, lobbing softball questions at the elderly patient we call the president. The reporter asked the strangest question: Will the government be investigating Elon Musk and his relationships with foreign governments?

For some reason, Biden gave out a wry smile, almost as if the issue had somehow come up previously. He gave a halting reply that almost seemed improvisatory. He said that the government would be “looking at” Musk over his relations with Saudi Arabia and China.

It was utterly bizarre. I thought at the time that this was just some bloviating nonsense designed to fill air time. Nothing serious.

In retrospect, it seems like more. The head of state specifically announced that Musk was under investigation by the deep state. That’s an incredible thing but perhaps entirely expected. They cannot tolerate free speech on such a big platform. It threatens to disrupt the great agenda of the last three years, which has been to reestablish the information controls that existed before the age of the internet.

In the view of the deep state, Elon cannot be allowed to succeed. This is why so many establishment advertisers immediately pulled out of the platform. It was an attempt to bankrupt the thing even before it got going. So when Elon rocked up, the company was immediately bleeding millions each day.

His first action was to fire the top management and make life as uncomfortable as possible for those who remained. It took a week or so but they packed their bags. He proceeded to lay off half the 7K-plus workers. Then he ordered some all-nighters to patch the bleeding wounds by going to a pay model.

He sold something as little as a blue checkmark but those have been coveted on the platform for a very long time. It turned out that many Twitter employees had been selling them in some kind of black market. Absolute corruption.

Unique to Musk’s style is his blunt honesty in public about his businesses and business conditions. It’s variously gotten him in grave trouble with the Securities and Exchange Commission because, as we all know, free speech is not allowed when it comes to the financial industry.

And so the other day at a staff meeting of exhausted employees, newly required to actually come to work, he dropped the B word: bankruptcy. It’s entirely possible that the company could move into Chapter 11 in time, even before the year’s end. This is despite having more users and usage than ever before.

Elon has made the company a huge success in only two weeks but, as we all know, success in business and finance is not defined by popularity but by the balance sheet.

The company is bleeding money and creditors are getting extremely antsy. Adding to the problems is that the state has targeted him and Twitter for complete destruction. The deep state was clearly emboldened by election returns on Tuesday, which failed utterly to terrify the powers that be but rather shored up the impression that the ruling class is here to stay.

No question that he and his new toy are in a situation of profound difficulty. Maybe his model of monetization works or maybe it doesn’t but he has still made a great contribution. He has exposed the great lie or great truth of highflying social media companies.

If the service is for free, that means that YOU are the product.

They have been getting a free ride for 10 or more years, pillaging data and selling it to all buyers, including governments. They push ads on you and the big advertisers are those who are also connected to the powers that be: most importantly Pfizer.

Ever wonder why you so rarely heard about the downside of vaccines and mandates? This is why. The companies were taking orders from this one company rather than minding their customers and stockholders.

Musk is absolutely right to move to a pay model. The free model under centralized platforms has failed. To be sure, there will be innovative ways in the future to fund free platforms via blockchain technology. But for the time being, this is becoming legally very difficult.

One innovative platform called Odyssey attempted this but ran afoul of the regulators because they said that the platform was selling securities. Just a few days ago, a judge agreed. This means that the government is being deployed to stop via coercion the next generation of technologies that George Gilder has correctly written represent the future of information economies.

My friends, we all want all this horribleness to go away sooner rather than later. But as the elections have demonstrated, the future keeps being pushed forward in time. The slog will be long and hard. Meanwhile, Wall Street is trying to make the best of it.

This week’s CPI report was absolutely awful: 0.4% month-over-month, same as last month, and 7.7% over 12 months, which is only lower overall due to a summer softening that seems to be abating.

Regardless, this is intolerable inflation. Still, financial markets went nuts with joy, simply because it seems to signal that the Fed might loosen its grip sooner rather than later.

I happen to think this is wrong: I think Jerome Powell is conducting a holy war against cheap money. He wants it to be his legacy. Still, Wall Street is hoping against hope that he will dial it all back just a bit.

No one doubts that inflation is still embedded and raging but there is now the remote possibility that Powell will chill sometime next year.

To put it bluntly, this is pathetic.

But hey, in these times, markets look for good news whenever they can find it. For now, and probably not for long, traders have found it in traditional, dividend-paying stocks, even while they continue to eschew the highflying and puffed-up tech giants that once bestrode the Earth.

The world will right itself at some point, thanks entirely to economic and not political forces. Elon is showing the way. Even if Twitter goes belly up, the case study is a lesson in the failure of woke ideology and censorship.

No one said that the trajectory from our world of lies to a peaceful and prosperous land of plenty would be a straight line.