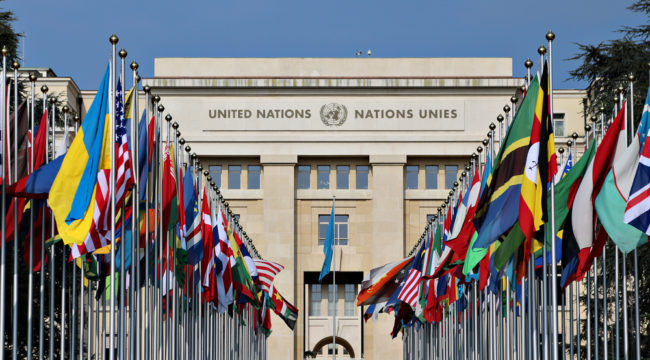 In the 1930s, elites said the New Deal would haul the country out of the Great Depression (it didn’t).

The U.N.’s Conference on Trade and Development just released its annual report. Bearing the sugary title “Structural Transformation for Inclusive and Sustained Growth,” it’s actually a rip-roaring manifesto for a global new deal. And they admit it. Quote:

“A global new deal will need to move beyond business as usual.” That, of course, will require “effective international cooperation and action.”

Strong stuff. What would a global new deal entail, exactly?

Truckloads of public spending on everything, alpha to omega. Taxes to kingdom come. Red tape and regulations beyond even that. Global wealth redistribution. Welfare. Here’s a dose, the authors indulging their fondness for commas to the full:

“The policy package in developed economies will need to combine a proactive fiscal stance, both on spending and taxation, with supportive monetary and credit policies, stronger financial regulations and redistributive measures through an incomes policy, minimum wage legislation, progressive taxation measures and welfare-enhancing social programs.”

The report also demands a return to the “developmental state” with its “production transformation policies” — the latter being out-of-town jargon for something less sweet: crony capitalism.

“Production transformation policies” is the kind of fimble-famble bureaucrats use to make trouble for honest words. And the one thing they can’t afford is honesty. No bureaucracy can. Here’s a stab at the “developmental state,” if you can penetrate the fog:

Jim Rickards calls obscure reports like this “silent dog whistles” elites use to communicate with each other. The information is open to the public. But only those in the know can decipher the coded messages behind the official gobbledygook.

Question: Are these elites putting their plan into action right now?

In April, global elites reached a climate agreement in Paris. And it’s about to become binding after 31 nations officially joined the accord in New York this Wednesday. It could be fully ratified by the end of the year.

Jim predicted global institutions will use climate change as a stalking horse for something more… sinister:

Climate change is a convenient platform for world money and world taxation. That’s one way the elites could sell their plans to the public. It’s inflation masquerading as “saving the planet,” “climate justice,” or what have you… If you have a global problem, then you can justify global solutions. A global tax plan to pay for global climate change infrastructure with world money is the end game.

The endgame? Jim’s been beating his tom-toms lately about special drawing rights (SDRs). That’s the IMF’s “world money” and Jim says elites plan to use it to replace the dollar in global trade. He’s also said global elites could resort to “helicopter money” to generate their blessed inflation.

What does climate change have to do with SDRs… helicopter money… and a “Global New Deal”?

The (April) climate agreement may have really just been a disguised helicopter money scheme. Spending on emission reduction programs and infrastructure could total about $6 trillion per year, which would be carried out by the IMF through the issue of special drawing rights (SDRs).

The U.N. report hints at an expanded role for the IMF. If our bureaucratese is up to snuff, that is. Mandarin is easier to translate:

There are signs that international bodies, such as the IMF, are rethinking their approach to macroeconomic adjustment. The necessary next step is for them to… consider the wide range of actions needed to diversify the structure and level of sophistication of economic activity.

Clear as mud. And probably not by accident…

A global new deal. The world could be one good recession away from it becoming a reality.