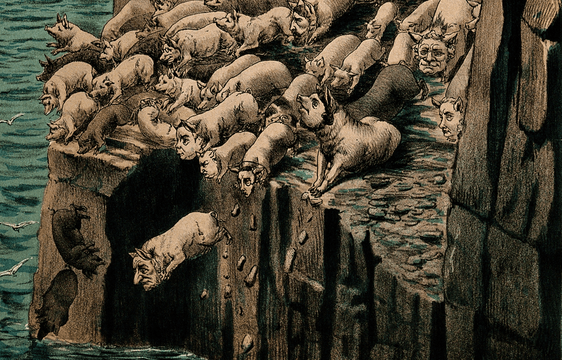 MELBOURNE — We haven’t heard too much from Fed boss Janet Yellen lately. But overnight she put the heat on asset prices by maintaining that interest rates would rise in the US sooner rather than later.

It makes perfect sense if you understand that sooner means later and later means much, much later. The Fed has been on a path to raising interest rates for years. That it’s taking so long reflects just how susceptible the economy is to higher interest rates.

The Fed’s plan is to get the markets to price in gradual rises so that when they finally act, the market takes it in its stride.

The main tool of central bankers these days is confidence management. That is, prepare the market thoroughly for any changes in policy. When the changes eventually come into effect, it’s old news. Confidence maintained.

A side-effect of this policy is a strong US dollar and weak commodity prices. Overnight, oil and gold fell as the US dollar gathers strength. The Aussie dollar weakened against the greenback too, so in Aussie dollar terms the falls were hardly noticeable.

The Fed’s interest rate talk also kept a lid on US stock markets. They finished flat overnight, ending the post Greek ‘resolution’ rally. More on the Greek farce in a moment, with a look at how bailout negotiations really work in a quasi-dictatorial state.

First, let’s continue down the confidence rigging path, because China is a particularly blatant confidence manager. You saw that yesterday with the release of China’s second quarter economic growth numbers.

Surprise, surprise, they came in bang on target at 7% growth! You sure don’t want to announce below target growth in the middle of a stock market crash, especially when you’ve just made it a capital offence to sell stocks in a desperate attempt to prop up the market.

The economic growth numbers didn’t help, by the way. China stocks sank 3% yesterday, defying the governments’ decree that stocks should only rise.

Meanwhile, more reliable economic data suggests China’s growth is much lower than the official 7%. A few days ago, the Wall Street Journal reported that in June, China:

‘…recorded a 3.4% monthly year-on-year drop in new-car sales, its first decline in more than two years. More worrying, the China Association of Automobile Manufacturers also cut its growth forecast to 3% from 7% for this year.’

Car sales are generally considered a pretty reliable indicator of economic growth. As is steel production in an industrialising nation like China. And on that front, the data isn’t good either.

‘Crude-steel production in China shrank 1.3 percent to 410 million metric tons in the first half compared with the same period of 2014, according to the National Bureau of Statistics on Wednesday. June’s output fell 0.8 percent from a year ago.

‘After decades of rapid growth spurred an unprecedented expansion in steel supply, output is now dropping as mills in China contend with a property-led slowdown, overcapacity and losses. The country’s producers are the linchpin of the global industry, accounting for about half of supply, and the slowdown is hurting iron ore demand. Growth in Asia’s largest economy held at 7 percent in the second quarter, beating expectations.’

The only explanation for the lucky seven growth number is the spike in activity in the financial services sector. However, the stock market bubble induced surge won’t last.

Neither will the latest Greek bailout by the looks of things. What a debacle it’s turning out to be. The creditors have imposed such harsh terms it looks intent on forcing Greek out of the euro in a smouldering mess.

The US-influenced International Monetary Fund is the only one talking sense — and that’s saying something. They want Europe to agree on debt relief for Greece as a part of a bailout package.

They know that Greece turning into a failed state could lead to major long term geopolitical problems. They are particularly concerned about Russia and Greece entering into some sort of alliance.

This should also worry the Europeans, but it doesn’t seem to be a concern. Funnily enough, a mate of mine — currently spending some long service leave in France — recently sent me an email saying the Greek crisis seemed more newsworthy in Australia than it did in Europe.

This surprised me. But then I read this revealing interview with former Greek finance minister Yanis Varoufakis. He made the comment that the UK Tories had been amongst his biggest supporters.

‘…the greatest supporters of our cause have been the Tories! Because of their Eurosceptism, eh… it’s not just Euroscepticsm; it’s a Burkean view of the sovereignty of parliament – in our case it was very clear that our parliament was being treated like rubbish.’

Perhaps that’s why Australia cares too? We see the complete disregard of Greece’s sovereignty, the bailing out of banks at the expense of a people, and rail against it.

I don’t know. But if you read the full interview I’ll bet you’ll have even more disdain towards the euro dictators. Keep in mind that the mainstream financial press have for the most part painted Greece’s political leaders as untrustworthy and incompetent.

It just goes to show the mainstream press (again, for the most part) is owned and controlled by the very interests that the Greeks are standing up to. I’m not suggesting Varoufakis’ version of events is the absolute truth — he has an agenda too.

But reading his comments makes me believe that the Euro group simply weren’t willing to negotiate from the outset:

‘HL: You’ve said creditors objected to you because “I try and talk economics in the Eurogroup, which nobody does.” What happened when you did?

‘YV: It’s not that it didn’t go down well – it’s that there was point blank refusal to engage in economic arguments. Point blank. … You put forward an argument that you’ve really worked on – to make sure it’s logically coherent – and you’re just faced with blank stares. It is as if you haven’t spoken. What you say is independent of what they say. You might as well have sung the Swedish national anthem – you’d have got the same reply. And that’s startling, for somebody who’s used to academic debate… The other side always engages. Well there was no engagement at all. It was not even annoyance, it was as if one had not spoken.’