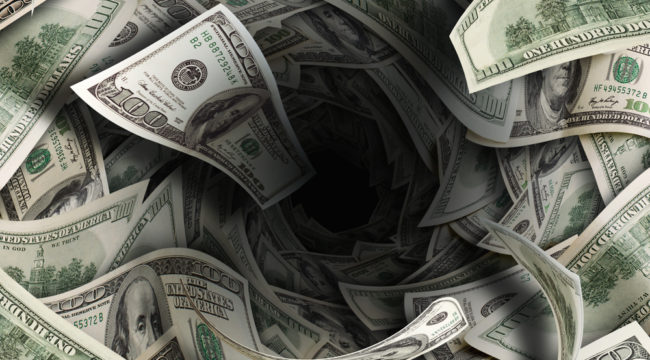 The Dreaded "S-word" Threatens a Return

A fearsome bogeyman may be stalking the American economy…

Dormant for decades, many considered it permanently licked.

But some have picked up its grisly scent… and discovered its approaching footprints.

What is this fee-fi-fo-fum?

And why its possible return?

Today we investigate the reports… weigh the evidence… and hazard a judgment.

We first note that first-quarter GDP fell 0.6% from the previous quarter.

And the New York Fed’s six-month business activity outlook plunged from 44.1 last month… to a dismal 18.8.

According to Danielle DiMartino Booth, former adviser to the president of the Dallas Fed:

The 26-point move lower is worse than anything seen during the 2008–09 financial crisis and on par only with the one that followed Sept. 11.

Of course, one swallow does not a summer make… nor does one snowball a winter make.

But the overall trend does not… encourage.

And at 107 months, the current recovery vastly exceeds the 58-month post-WWII average.

How much longer can it last?

But to the second part of our tale…

Consumer prices — excluding food and energy — rose at a 2% annual rate the first three months of 2018.

And oil prices have soared nearly 50% since last August alone.

The cost of fueling an average tractor-trailer has risen nearly $100 over the past year.

Your grocer, of course, hands you a part of that bill at the check-out.

“More and more we are going to see small businesses having to pass along those higher costs,” affirms Scott Anderson, chief economist at the Bank of the West.

Meantime, the folks at Phoenix Capital say the bond market is predicting a “massive inflationary development.”

Perhaps the single best metric for measuring inflation versus deflation for the bond market is the Treasury inflation-protected securities (TIPs) versus Long U.S. Treasury ratio.

In its simplest rendering when this ratio rises, it means inflation is on the rise. When it falls it means deflation is dominating the bond markets.

As you can see in the chart below, this ratio has just broken out of a 10-year deflationary downtrend. This is the FIRST confirmed breakout since the 2008 crisis. And it signals a tectonic shift toward inflation is underway in the bond markets. 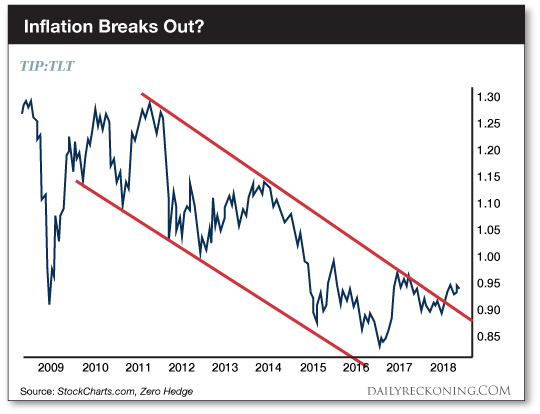 A “tectonic shift toward inflation is underway,” they say.

Above we draw a portrait of weakening growth… and approaching inflation.

Which inevitably brings us to the topic of today’s discussion…

The word is as ugly as it sounds — a ghastly portmanteau of stagnation and inflation.

It conjures the darkest days of the 1970s…

We do not suggest stagflation has arrived — unlike the 1970s, for example, official unemployment is low.

And gas lines can nowhere be found.

But with slackening growth and percolating inflation… are we receiving a foretaste of coming events?

“Investors better wake up to the growing risk of stagflation,” thunders the aforesaid Danielle DiMartino Booth.

“By all metrics, inflation is heating up,” she continues, “but it’s not clear the same can said for underlying economic activity.”

Ms. DiMartino Booth is not alone.

This idea of facing higher rates and higher inflation with decelerating economic momentum — that’s stagflation and that’s very frightening for both stock and bond investors.

Our how about the maestro himself?

What does old Alan Greenspan say?

Stagflation is about to emerge. We are moving into a different phase of the economy, to a stagflation not seen since the 1970s.

Given Mr. Greenspan’s “imperfect” forecasting record… you may salt his comments according to your taste.

But finally we come to our own Jim Rickards:

Now we’re returning to that unpleasant combination of low growth and high inflation… Stagflation may be in the cards. If so, it will be a return to the late 1970s when the “misery index” was created to describe the stagflation combination of high interest rates and high unemployment at the same time.

History rarely, if ever, repeats itself, as Mark Twain said — but it does “rhyme.”

Could we be heading for a 21st-century stagflation… absent the trappings of the disco era?

We have no answer, of course.

But two things we do know…