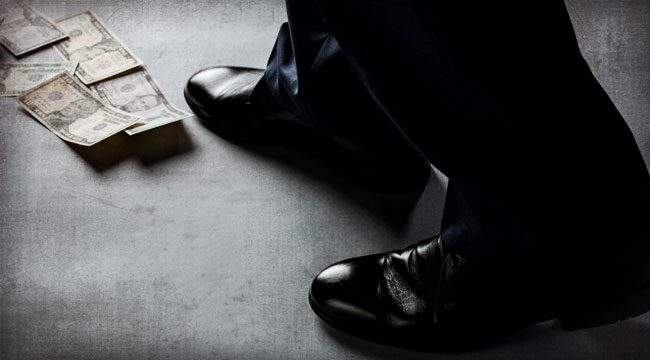 “Year: a period of 365 disappointments.”

The year 2014 was one of the worst ever for stock pickers. But almost everyone thinks about this in the wrong way. And it could cost you a lot of money in the long run if you think this way too. I’ll tell you how I think about it instead below.

Glushkov says that 2014 “is likely to enter the record books” as the year when active managers — as opposed to index funds — “delivered their worst performance relative to the index, net of fees, since at least 1989.”

Faced with that experience, people are pouring money into passive funds — like S&P index funds. As nearly everyone knows, the universe of stock pickers can’t beat the market, because of fees. Still, this year was an epic rout.

There’s been a lot of ink about why this is. I don’t really care about it, because I think we’re all guessing. And secondly, even if we knew, it doesn’t mean we’d be able to predict when things would change.

So here’s part one of my advice: Ignore all talk about trying to explain it. Don’t try to chase returns, because doing so will cost you a lot of money over time.

Don’t try to chase returns, because doing so will cost you a lot of money over time.

Most people won’t do that. Most people chase returns. As an example, consider one of my favorite studies of all time by Dalbar. It showed that the average mutual fund earned a return of 13.8% per year over the length of the study. Yet the average investor in those funds earned just 7%. Why?

Because they took their money out after funds did poorly and put it back in after they had done well. Investors were constantly chasing returns.

Another favorite example is Ken Heebner’s CGM Focus Fund. It was the best fund of the decade ending 2010. Heebner’s fund turned in a sparkling 18% return. Yet the typical investor in his fund earned just 11%. Same thing: People pulled money out when they had an off year and plowed it back in after they had a great year.

I wrote about this in my first book, Invest Like a Dealmaker. And the advice I gave there is still the advice I give today. To illustrate that advice, let’s look at how Mohnish Pabrai answered a question put to him by Barron’s.

Pabrai’s fund has returned close to 10% over the last 10 years, beating the index by about 1.5 percentage points. But he’s well behind the index this year. Here’s Barron’s:

“When asked about this underperformance, he replied, ‘I think it is an irrelevant data point. There is nothing intelligent that one can say about short periods like 10 months. I never make investments with any thought to what will happen in a few months or even a year.’” [Bold added.]

The problem with the 24/7 media culture we live in is that everybody has to have something to say almost all the time. And yet most of the time, there really isn’t anything worth saying.

So we get incessant daily commentary on every blip in stocks, gold, bonds and so forth. It’s all meaningless drivel. I’m with Pabrai: There really isn’t anything intelligent to say about returns over such a short period of time.

In fact, I’ll go further: I don’t think you should compare yourself with the S&P 500, or the broader market, at all.

Here’s what Martin Whitman, one of my favorite investors, has to say about it:

This is from Modern Security Analysis by Whitman and Fernando Diz. If I had to pick an investing bible, this would be mine. I love the approach, and Whitman has had a big influence on how I think about investing over the years.

The reason Whitman has such disdain for the market-beating point of view is that managers have different goals and duties. A manager investing for an endowment may aim for safety and income over capital gains. Thus, if such a manager turned in a 9% return with a portfolio of conservative names that never missed a dividend, it seems silly to rip him for trailing the S&P.

Besides, who cares about one year?

You have to play the long game. And anyway, there are approaches and investors who have beaten the market by a solid margin over time. The thing is, they seldom beat the market consistently.

The best investors lag the market 30-40% of the time. As Barton Biggs once wrote after analyzing the stellar returns of superstar investors: “None in the group always beats the S&P 500 probably because no one thought that was the primary objective.”

There are ways to beat the market over time. My own CODE approach — what I use to guide my Capital & Crisis readers –is one of them, with an annualized return of 16% over the last decade, more than three times the S&P 500. But none of these approaches always beats the market. Even the best lag it, and often.

Keep that in mind before you reshuffle your portfolio after looking at year-end results. Don’t chase returns!

P.S. I have a lot of good things I’m already thinking about for 2015. There is the continuation of my “100-bagger project”. There are places to visit and people to see. I also look forward to seeing how our ideas play out. And there are new ideas I’m diving into.

So to end this letter, I want to thank you for your continuing support. It is a privilege to write to you. I really enjoy this work, and few things give me as big a charge as when I have a new idea in hand to write to you about. I hope you’ve enjoyed reading these missives and that I’ve contributed something to your understanding of the financial markets. If you haven’t signed up to receive these reckonings by email, you’d do yourself a favor by clicking here and signing up.