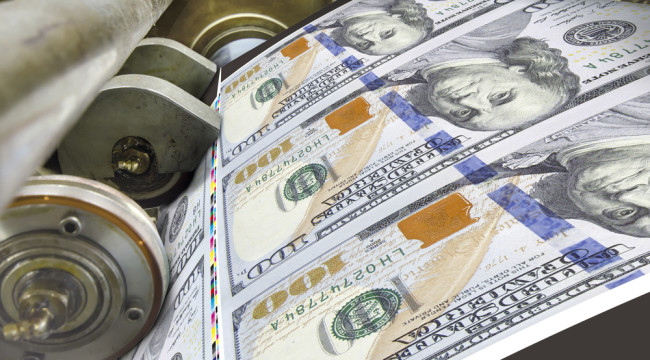 – The Beatles, “Lucy in the Sky with Diamonds”

BALTIMORE – We’re drifting in fog. Have been for years.

A vague silhouette… the outline of something… coming into focus.

Yes… it’s the strange Isle of Peculiarities and Impossibilities.

When it rains on this island, the water comes up from the ground. When the sun shines, you have to put on your galoshes. The plants growl… and the rocks weep.

We threatened to explore the Fed’s fabulous monetary policy today. So, let’s cast off… and row to the shore and see what we can find.

When the Fed announced its QE program almost eight years ago, we didn’t know quite what to make of it.

“Money printing,” we called it.

“No, it’s not money printing at all,” said a number of voices, including some on the Bonner & Partners research team. It was an entirely new species, they said…

They were right. It wasn’t “money.” And central banks weren’t “printing” it.

The idea was that the extra demand would push up bond prices and push down yields. (Bond yields and prices move in opposite directions.)

Because the banks couldn’t spend their reserve balances. And they didn’t need them to make loans. Plus, it’s up to central banks what rate of interest they pay banks on those reserves.

Then it got weirder.

Central banks began talking about… and later experimenting with… paying a negative rate of interest on those reserves.

What was this oddball creature?

Like the platypus or the pink fairy armadillo, we first thought it was a joke. It couldn’t exist. And yet, there it was.

Nobody knew what these strange beasts would do, either. Were they dangerous? Poisonous? Nobody had ever seen one before.

But in the bars of lower Manhattan and the pubs of the City of London, heated arguments broke out as economists and traders tried to figure out this new ecosystem.

But time has brought the whole thing into sharper focus. And now, we see… What is really happening on this fantasy island?

Apparently, we were right all along. It is money printing!

Warm Up the Choppers

Even establishment economists are starting to come around.

Under QE, the central bank buys financial assets in the markets (usually government bonds) with money it issues itself, thereby increasing both sides of its balance sheet [asset and liability].

In practice, hardly any extra notes are printed. Rather, the extra money is created electronically. But since deposits at the central bank are interchangeable with notes, to describe this as “printing money” is acceptable shorthand.

The research department of French investment bank Natixis goes further with its analysis:

Some people call for putting into action a plan of “helicopter money”: the distribution of money [by the government… with no offsetting taxation or borrowing].

But in reality, quantitative easing already is helicopter money.

When a government gives out money – say, to the poor – explain Natixis analysts… and funds that spending with central bank purchases of government bonds… it is no different from just “printing money.”

The feds have gotten a credit, with no real debit. They have money to spend, but they don’t need to pay their debt.

In fact, the way it works now is that the Fed returns the interest on the government’s bonds – as feeble as it is – to the Department of the Treasury.

It would be a bit like borrowing money to buy a car.

Then, the lender sends your interest payments back to you… and keeps rolling over the debt, presumably forever.

You would have a free car!

Which is exactly how economist Richard Duncan at Macro Watch describes it.

Not only is the new money the feds get free… the central bank can also make past borrowing disappear.

Duncan says that when a central bank buys a U.S. government bond, it effectively cancels the debt.

Interest payments are returned to the debtor… and the principal is never collected. QE is “debt cancellation,” says Duncan.

Let’s get this straight: You borrow… you spend… then your debt is cancelled.

It’s almost too good to be true, isn’t it?

As a precaution, we’re getting back in our boat. This island gives us the creeps.